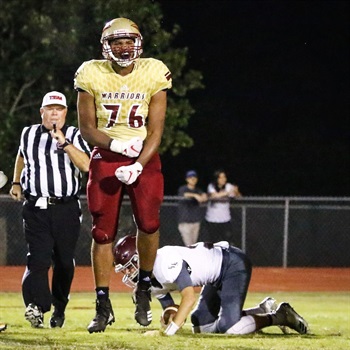 No rankings at time of offer.

Either that or the ref is a midget
Likes: southpaw75

The offers have been rolling in for Murfreesboro Riverdale defensive lineman Javon Nelson this spring. Tuesday saw two more come his way. First it was South Carolina and then a conversation and an offer that he had been hoping would come this spring. On the other end of the phone was Tennessee wide receivers coach Tee Martin. "It felt great," Nelson said. "I had a big smile on my face. He asked me about my day at school and practice. He was telling me about how they looked at my film and how they liked my game. They told me they were offering me and I look forward to getting over to Knoxville next month for camp."
Nelson has never been on Tennessee's campus. But he grew up in a family that for the most part likes the color orange. "All of them is except my older cousin," Nelson said. "She went to Georgia, but they are all cool with Tennessee. They know I like that orange color too (laughs)."
Click to expand...
Tennessee has been by Riverdale twice this spring with both Martin and Tracy Rocker stopping by to check in on Nelson. Rocker and Nelson have been starting to build a bond early in the process. "Coach Rocker and I have been building a relationship," Nelson said. "He came down to see me this spring and when we have spoken over the phone and (texted) messaged, he's been great. He's been telling me about the defense and stuff." Nelson has Kentucky, Mississippi State, Ole Miss, South Carolina and Tennessee from the SEC that have all recently offered. Georgia could be next with the Bulldogs showing more interest of late. He's grateful for the opportunities. "It's been a great journey," Nelson said. "It makes me want to push myself even more and find my best so I can find myself in the best aspects of my life both on and off the field. It makes me feel so wonderful to see my hard work pay off. It's going to give me options for my future and to be able to do big things for my family."
Click to expand...
Riverdale was down by their standards, last season, but Nelson has high hopes for this fall. He believes he and his teammates can turn things around in Rutherford County. "I feel like we will bounce back because last season we had a young team," Nelson said. "Now we have all played together and we are working together as a family. I see the work we are putting in and I know I'm getting bigger and faster and stronger." Nelson trains with On Top Athletics out of middle Tennessee. OTA has developed a nice group of defensive linemen with Georgia signee Zion Logue and Tennessee targets Jay Hardy and Tre'Vonn Rybka joining Nelson in being highly coveted defensive linemen in the OTA family. Being a part of D-Line High has been a good motivating factor for Nelson. "When I compete with them it makes me push even more," Nelson said. "I see them living their dream and it makes me want to live mine. I want to push my limits farther and just beat them because they are great players."
Click to expand...
-VQ
Likes: T Dog, HoleInTheRoof and quadlee21
C

camped today per 247
Likes: HoleInTheRoof, T Dog, SweetasSoda and 3 others

“I thought it was cool,” said Nelson, who’s ranked the No. 235 overall prospect and No. 17 strongside defensive end in the 2021 class and the No. 7 rising junior from Tennessee, according to the industry-generated 247Sports Composite. “I liked the school down there. I liked the coaching staff when I was talking to everybody after the camp. I had a fun time. I took a tour of the campus and it was fun down there.”

“I mean, I feel like the ones I’ve been up there to — so Mississippi State, Kentucky, Tennessee and Vandy — I feel like they’re all up there,” he said. “I’ve gotten to talk to their coaching staffs more, and I feel like I know more of the team, and they’re higher on my list because I know them better.”

The Vols’ coaches already liked what they had seen from Nelson, but they were impressed with his performance during their camp. “When I was talking to (defensive line) coach (Tracy) Rocker, he told me he liked me, what I was doing,” Nelson said. “He said he liked how I had a twitch in me. He said, ‘I like the fact that, when you get off the line, it’s not hesitant.’ He liked the fact that I get off the line, don’t think about it. I just get off the ball and I use my speed to my advantage, and he liked how I was moving and everything. “I did really good in my one-on-ones. I don’t think I really lost much.”

“They liked me down there,” Nelson said. “When I talked to Coach Pruitt afterward, he was saying he could see me being a rusher off the edge. He was saying that he could really see me being a five(-technique) and everything. "They’re looking at me highly. They were telling me that they want me to be down there. And they were telling me I shouldn’t look out of state. I need to stay at home and be there close to my family and everything.”

“I mean, I really like the campus and everything,” he said. “I feel like I’m going to go down there and I’m going to go look at the school more now. After seeing it the first time, I’m going to get a few more looks on how I look at everything, because I liked it when I was down there.” He said he likes the idea of staying in-state, “and I liked being down there with Coach Rocker and how he coaches and everything. I just liked the way he coached and talking (with him) when we sat and had our conversation,” Nelson said of Rocker. “I met with him and Coach Pruitt, mainly, afterward.”

While Nelson currently isn’t planning to take any more visits in late July after the ongoing dead period, he said he’s hoping to make it back to Kentucky, Tennessee and Vanderbilt to attend games this season. He said he doesn’t “know yet” when he might be ready to decide on a college, but for now he’s “feeling like I’m going to commit” during his senior year.
Click to expand...
-247
Likes: quadlee21, F0Rt_V0L, MoB_MoVols and 5 others

Four-star defensive end Javon Nelson out of Murfreesboro, Tenn. doesn’t have a top-five at the moment. In fact, he doesn’t have a top-10, really. The 6-foot-3, 260-pound 2021 prospect has no plans of announcing his commitment prior to his senior campaign and the possibility of early playing time won’t even be a factor in his final decision. Nelson is all about the right fit and he’s in no rush to find it. “The recruiting process has been really great. I like meeting coaches, talking to them and experiencing new things,” Nelson said. “I do plan on signing next December, but I’m not sure right now if I’ll make a commitment before that time.” Tennessee, along with 11 other schools, has already extended an offer to the Riverdale High School product. Of the Southeastern Conference, Georgia, Kentucky, Ole Miss, Mississippi State, South Carolina and Vanderbilt have submitted its name in the hat. Oklahoma, Virginia Tech, Louisville, Georgia Tech and Charlotte are also in the hunt.
Click to expand...
Nelson took in game at Neyland Stadium earlier this season when the Vols fell to BYU in double-overtime. “I had a real fun time. It was pretty cool seeing the environment there,” Nelson said. “It was a lot louder than I thought. They had a good crowd there. “It was sad how the game turned out, though, in that second overtime.” Nelson has also attended a Vanderbilt game this season and plans to visit the school who gave him his first offer – Kentucky – at some point in the near future. “Vandy and UT have probably been the coolest places I’ve visited so far. Their facilities and all the attractions in their stadiums caught my eye,” Nelson said. “At Tennessee, I loved the crowd. There was so much energy in the stands. It was so hype.”
Click to expand...
The Vols made their offer to Nelson back in May before seeing the defensive end at camp over the summer. “I like that its home and I like the way coach Rocker coaches,” Nelson said. “It reminds of me family like when I was little and the way I was coached. It’s good energy. “I got to talk to him for a little bit before the BYU game. He was just asking me how I was doing.” Rocker, along with the rest of the Tennessee coaching staff, has a track record of producing NFL talent. Nelson said that is something he has studied when looking at Tennessee, but overall, the feel has to be right when he makes the final call. “It has to feel like home for me. I need to know the coaching staff,” Nelson said. “I need to see how they coach players by talking to them.”
Nelson describes himself as a traditional 4-3 defensive end with great hands as a pass rusher off the edge. He describes himself as a leader and an ‘energy guy’ on a team.
Click to expand...
When asked about the slow start to the season for Tennessee, Nelson didn’t pay too much worry to it. “It doesn’t really matter to me because I expect to turn things up if I go there.” The Middle Tennessee native has plenty of time to perfect his craft before taking his game to the next level. He already has the skills wanted by college coaches but he understands there is always room for improvement. “I’ll be working on the little things over the next year – things like technique and fundamentals,” Nelson said. “I’ll also be working on deciphering between run and pass plays a little bit quicker.” Riverdale is 5-2 on the season. Nelson and the rest of the Warriors will be back in action Friday, October 18, at Oakland.
Click to expand...
-VQ
Likes: highspeed, VOLINVONORE, jackcrevol and 1 other person
A

I watched him play a couple games this year l wasn’t impressed. However it’s a sophomore OLB on his team that also have a offer from UT was impressive. Sorry l can’t think of the kids name right now.
A

Elijah Herring is his name