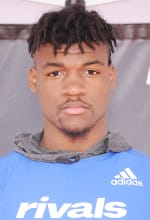 Tennessee offered 2020 Memphis (Tenn.) Kirby DE Corbet Mims tonight, adding to his quickly growing list. Mims won the defensive line MVP at the Rivals Camp in New Orleans earlier this spring and will be among the Top 20 in the state when the new rankings are released next month.

Mims tells me he will be on campus in Knoxville on June 14 for an unofficial visit. I asked him if he would be camping but he told me he wasn't sure. Ole Miss and Arkansas State are the other schools set to receive visits from Mims in the next month.
Click to expand...
- Woody
Likes: FïreBall, RollerVol, dan4vols and 1 other person

“I think that was one of my goals I was waiting on. I wanted to have Tennessee as one of my (offers),” said Mims. “I used to watch them play. They used to be my favorite team. They still are.”

But that’s not to say Mims simply was waiting on an offer from Tennessee and now is destined to play there. He referred to Ole Miss as his leader last month after getting an offer from the Rebels less than a month ago and recently visiting them, and he said they’re still his favorite at the moment, although he’s “keeping my mind open.” He’s already planning to return to Ole Miss on June 1 to attend one of the Rebels’ camps.

Mims said his summer schedule now is likely to include a trip to Tennessee, though, and he’s looking forward to seeing for himself what the Vols have to offer. “We’re trying to schedule a plan, see if we can get up there one day,” he said. “I think maybe in June.” Rocker came away impressed with Mims after visiting his school. “Coach Rocker said he loved the way I exploded off the ball, I used my hands and how I had leverage,” Mims said. “He thought I would be a good leader for their team.”

He said the Vols have indicated that they view him as a possible edge rusher in their 3-4 base defense. “Basically, the defensive line coach said he believes he can see me as an end and an outside linebacker,” Mims said, referring to Rocker. “He’d have me working with their (outside) linebacker coach (Chris Rumph) and himself.”

Mims has yet to make his first visit to Tennessee’s campus. He said he recently made a trip to Knoxville to watch a 7-on-7 tournament, but he didn’t get a chance to tour the Vols’ facilities while he was there. Ole Miss, Mississippi State, Vanderbilt, Oklahoma, Alabama, Arkansas, Memphis and Western Kentucky are among the schools he has visited so far this year.
Click to expand...
-247
Likes: T Dog, dmwhite1, TrueVolsGBOInsider and 1 other person

Needs to eat like a horse & gain more weight to be able to play the DT position in the SEC.

W.TN.Orange Blood said:
Needs to eat like a horse & gain more weight to be able to play the DT position in the SEC.

I’ll like this kids frame. The possibilities are endless at 6-4 245+!! If I’m an offensive coordinator in Memphis I don’t wanna see this kid line up across from me!

W.TN.Orange Blood said:
Needs to eat like a horse & gain more weight to be able to play the DT position in the SEC.

Or he could end up losing weight & play at LB @ 240 lbs.
Click to expand...
I could see him gaining weight and being a Curt Maggit type of player!
Likes: Pacer92

TrueVolsGBOInsider said:
I’ll like this kids frame. The possibilities are endless at 6-4 245+!! If I’m an offensive coordinator in Memphis I don’t wanna see this kid line up across from me!
Click to expand...
Agree...I think this kid has potential to really blow up this fall..
Likes: TrueVolsGBOInsider

Corbet Mims was under the weather on Monday and was a bit peeved when he got called to his coach’s office. His mood immediately changed when he realized who was there to see him though. “Is this really Tennessee?” he thought. Mims was then introduced to Vols defensive line coach Tracy Rocker, who extended an offer to the Memphis defensive lineman and added another in-state name to a crowded DL board.

“I’ve been waiting on this one,” Mims said. “Tennessee is one of my favorite teams and it just made my day. I started feeling a lot better after that.” Mims is a 6-foot-4, 240-pound outside linebacker/defensive end at Kirby, with offers from more than 20 schools including Ole Miss, Arkansas, Mississippi State, Missouri and Vandy. Tennessee is the latest school to join the mix after Mims had an impressive junior season.

Asked why Tennessee, which hadn’t been in much contact before Monday, extended the offer, Mims said Rocker found his film and “really liked my leverage. My violent hands. Coach Rocker said I’m really explosive.” The Memphis native also impressed Tennessee’s defensive line coach with his demeanor and attitude. Despite not feeling well Monday, Mims greeted Rocker with a maturity the assistant rarely sees on the recruiting trail.

“He called me a true student athlete. He liked how I looked him right in the eye and gave him a firm handshake,” Mims explained. “He said most other kids don’t do that. They look down or away. Or don’t even shake hands. He said I could really be a good leader and a real student athlete. He told me he wants me to be a part of the change there.”

Ole Miss is the early favorite for Mims, who has visited Oxford several times. But with Tennessee, Oklahoma and others suddenly in the picture, he’s in no rush to make a decision. He’s visited Tennessee once for a 7-on-7 tournament, but did not get to truly tour the campus or see the facilities. He’s eager to change that next month, hoping to make a trip east and see the school where one of his favorite former players — a guy he’s only see via highlights — was a star.

“I love the old school guys. Reggie White is one of my favorites,” he said. “So right now I’m keeping my mind open. Me (and my family) want to visit some schools this summer on unofficial visits. Coach Rocker talked about finding a day to get us up to Tennessee.”
Click to expand...
-VQ
Likes: feathersax, Woodlawn VOL, gmoneyvol and 3 others
S

Easy player comp is Roman Harrison. Mimms also lines up at nose tackle and dominates the guy in front of him. He’s not quite as good as Harrison but the upside is there. Needs to get better at tackling

scvolfan7 said:
Easy player comp is Roman Harrison. Mimms also lines up at nose tackle and dominates the guy in front of him. He’s not quite as good as Harrison but the upside is there. Needs to get better at tackling
Click to expand...
DO you know football?

While Tennessee is in a great spot with a number of key defensive lineman, especially in state, the Vols continue to search for options at outside linebacker/weakside defensive end. Jordan Davis remains committed, but the junior college prospect hasn’t been to Tennessee in months and continues to flirt with other schools. This spring, the Vols offered a number of intriguing targets at outside linebacker, including Memphis native Corbet Mims who had 13 sacks as a junior. The 6-foot-4, 240-pound pass rusher from Kirby picked up his UT offer last month, having his “day made” with the news. Mims claims more than 20 offers, with Ole Miss currently out front in his recruitment.
Click to expand...
Saturday was a chance for Mims to get his first real look at Tennessee, though. After briefly seeing things during a 7-on-7 tournament as a ninth grader, today Mims toured the campus and facilities, participated in camp and “chopped it up” at lunch in Chris Rumph’s office. “I was happy to be here. I was really shocked to see how they’ve upgraded the facilities. I was really excited to come here and work,” Mims told VolQuest. “I believe I did great. I was taking in the things coach (Chris) Rumph was showing me. I was taking in all his coaching, what I needed to do, need to fix. Basically I was just trying to give my 100 percent. They were trying to help me be the best football player I could be.” After showcasing his skills during camp, especially during 1-on-1s, Mims and his family spent a long time with Tennessee’s coaches. The Vols like him as a hybrid pass rusher, capable of standing up or putting his hand in the ground.
Click to expand...
“They want me to do both,” he said. “So today we were just trying to get to the next level of our relationship. We talked about choosing my college wisely. How I can became a next level player, if I come here or go to any other college.”
Saturday’s visit felt surreal at times for Mims, who said he grew up a big Reggie White fan. Despite his youth, he prefers the “old school guys,” so being at the same place as his idol was “surreal.” “It’s really shocking,” he said. It’s different campus, different schools that breed different positions. Like Alabama, they breed wide receivers, DBs and defensive line. Georgia, offensive line, some receivers. But this place breeds some real hybrids. Pass rushers.” While Mims recently named Ole Miss his leader, he left Tennessee saying the Vols “definitely” gave him and his family something to think about. The Memphis product isn’t in any rush though, likely to take the process to signing day. One thing for sure is that Tennessee made a strong enough impression that Mims will take an official visit here this fall. “We’re going to take official visits to Kentucky, Oregon, here and probably Arkansas State,” he said.
Click to expand...
-VQ
Likes: ChiTownVol, T Dog, VOLuptuousBOOMS and 4 others

I’d take him over Davis right now. Might now help immediately like Davis, but would be a better investment in the long run, IMO.

Where Davis might have more natural talent, he’s a mercurial player and headcase. This kid is talented and hungry.
Likes: MoB_MoVols

HoleInTheRoof said:
I’d take him over Davis right now. Might now help immediately like Davis, but would be a better investment in the long run, IMO.

Where Davis might have more natural talent, he’s a mercurial player and headcase. This kid is talented and hungry.
Click to expand...
Davis? Refresh my memory... I'm drinking
Likes: Volsdeep4

Eh.. I mean I’m sure he’ll turn out to be a good player but if all goes well we won’t have the room