Could this kid and Ty Simpson be the QB prospects for 2022?

reVOLution33 said:
Was just about to post that the kid looks like Juaun Jennings in highschool then realized as I was scrolling up to check his class year I saw I had already said this previously. 😂😂
Click to expand...
Look forward to your post end of October telling us again 😂
Likes: reVOLution33 and VOLSONLY

FranklinVol2 said:
I go to independence, kid absolutely torched our defense. He’s legit
Click to expand...
I went to Brentwood. Going to a school has no bearing on opinions. Independence took a step back this year. Same as franklin.

volfaninpa said:
Could this kid and Ty Simpson be the QB prospects for 2022?
Click to expand...
Simpson, yes.

escapegoat2 said:
I went to Brentwood. Going to a school has no bearing on opinions. Independence took a step back this year. Same as franklin.
Click to expand...
Nice take down of a high school kid. You sure you went to Brentwood? Didn't attend the Butchna School of Imperiousness?
Likes: BondJamesBond, walkenvol and VolSince84
H

As the Sunsphere Turns

Destin is playing in the 5A state championship tonight, if anyone is interested. Mr. Football finalist.

Kid is balling in the state title game so far. Looks like the fastest kid on the field
Likes: LittleVol, T Dog and Hollovol05 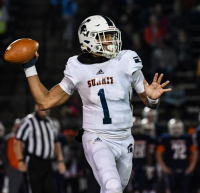 reVOLution33 said:
Was just about to post that the kid looks like Juaun Jennings in highschool then realized as I was scrolling up to check his class year I saw I had already said this previously. 😂😂
Click to expand...
Kid is much better as a qb than Jennings ever was. Jennings was considered more of a lean towards being labeled athlete than qb. Wade makes real throws and has zip on his passes like a true qb.
Likes: VOLED, BillVol7 and LittleVol

What position does this guy play in college?

Destin Wade: “I haven’t heard too much about him but I did hear he has a great style of offensive play. I’m looking forward to digging deeper into what his offense can do and getting to know him. I’m still interested in Tennessee and how it’s in state. It has a great vibe.”
Click to expand...
-VQ
Likes: StanfordVol, sneakergawd, OrangeShade and 6 others

I think this kid is Destin to be a Vol.
Likes: Bassmaster_Vol, UTMVol76, Ratvol and 8 others

Wonder if CJH sees this young man as a QB, as opposed to just an athlete.

HoleInTheRoof said:
Wonder if CJH sees this young man as a QB, as opposed to just an athlete.
Click to expand...
Surely we can do better
Likes: igotworms

osh Heupel’s reputation coming to Rocky Top is a coach who develops quarterbacks with an offense that is fun and exciting to watch.

Something the former UCF coach did very well in Orlando was putting athletes on the field and finding the best ways for them to succeed.

In-state athlete Destin Wade could benefit from that type of coaching.

The Summit Hill standout quarterbacked his team to the class 5-A state title this year but has the intangibles to find the field in several spots. That’s something the four-star realized over the past week when analyzing this new offense coming to Knoxville.

“It’s a great fit for me as a quarterback and for running the ball,” Wade told Volquest. “With me being an athlete and moving in different ways, I could be a dual-threat, and not just at quarterback, but at other positions as well.

“I do that when I go to camps. I definitely need to work on my progression, route running and releases, but I think I’m an athlete who could benefit in this type of offense.”

Both Wade and his twin brother, Keaten Wade, rank as top-10 prospects in the state of Tennessee – coming in at No. 10 and No. 4, respectfully. The older brother [by two minutes] Destin, is tabbed as the 28th-best athlete in the class of 2022 and owns a 5.8 Rivals Rating.

“I have about 18 offers right now,” Wade said. “I plan on releasing a top-10 here soon – probably in the next few weeks.”
The Spring Hill, Tenn. native told Volquest that Tennessee would likely make the cut and that gives Heupel a chance to get back into the race.
“He called and talked to both of us [Keaten, too] that first night on the job. We were some of the first guys he called,” Wade said. “He said we were priorities in this class and wants us to get onboard with the Vols to make an impact.
“He said that the early meetings with the team have been going really well and that he’s ready to get this thing going.”
The new Volunteer coach also had some jokes during the phone call, apparently.
“He said he liked twins,” Wade laughed. “He was really easy to talk to – making jokes and all. He asked us who eats the most food or if we still bunk in the same room. It was a good conversation.”
Since that conversation over a week ago, Heupel has kept in contact with Wade through a couple of text messages. The athlete said the new Vol head man plans to keep in touch and wants the twins to come visit Knoxville as soon as things begin to open back up.
This offseason, Wade continues to train for his upcoming senior campaign. The 6-foot-3, 205-pound athlete hopes Summit can run it back one more time. In the meantime, the athlete is playing basketball for his school.
Click to expand...
-E. cain
Likes: dmwhite1, BigOrangeGoose, F0Rt_V0L and 7 others

Brother didn’t include us
Likes: VolByLaw

InVOLuntary said:
I think this kid is Destin to be a Vol.
Click to expand...
I got it @utvols88

Glitch said:
I got it @utvols88

Brother didn’t include us
Click to expand...
I see the T in both pictures.
Likes: captainfalcon777, BigOrangeGoose, VOLSONLY and 2 others

I kp telling people this kid is more than just an athlete. He passes with accuracy and is mobile.
Likes: drvenner, ThreatLevelOrange, American_PitVol and 8 others

InVOLuntary said:
I think this kid is Destin to be a Vol.
Click to expand...
I am just glad he is not Destin to Florida.
Likes: drvenner and InVOLuntary
New posts
You must log in or register to reply here.
<< Tennessee Vols Recruiting Forum
Share: Facebook Twitter Email Link