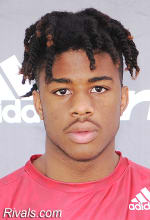 One of the top players in the state of Tennessee for the Class of 2021, Turrentine continues to look the part of an elite prospect. Listed as an athlete, Turrentine could play a number of positions at the next level, but his highest ceiling is likely at defensive back. Turrentine has early offers from LSU, Tennessee, South Carolina and others.
Click to expand...
-Rivals
Likes: FïreBall, BornToBleedOrange and VOLuptuousBOOMS
V

This kid is a good player!! He's not an elite athlete but he makes it up with a high football IQ.

His brother played for us. We had hoped to get Andre but when Ensworth came calling it was done deal.

AaronUT said:
I bet he can burn you like terpentine.

From the adidas East Coast 7-on-7 Invitational in Miami:

There were players older, bigger, and faster than Turrentine but he seemed to be in the right place at the right time an awful lot. He isn't a small defensive back and he made sure opposing receivers knew how physical he could be but, more often than not, Turrentine used his vision and ability to anticipate the play to deny the throw to his receiver or zone. Turrentine has great length and showed the ability to win jump balls and prevent big plays down the field. Teams like Alabama, Arkansas, LSU, Ole Miss, Virginia Tech, South Carolina, Tennessee, and others have already offered him.
Click to expand...
-Rivals
Likes: ScornedPapaVol, FïreBall and T Dog
V

MoB_MoVols said:
From the adidas East Coast 7-on-7 Invitational in Miami:

-Rivals
Click to expand...
This is a great analogy of his skills set. He's not very athletic at all but knows how to play football. I believe when it's all said and done though he will not be as highly ranked or thought of as he is now. Its several DB's in 2021 in the middle TN who names this spring and summer will start to surface who are better.

Andre Turrentine went more than a year without visiting Tennessee, but the 2021 Nashville native changed that recently when he made the trip across the plateau. The Ensworth defensive back is considered one of the top underclassmen in the state and the visit to Knoxville allowed him the opportunity to meet Tennessee’s new defensive coordinator and secondary coach Derrick Ansley. “It was good to get back up there. I got up there with coach Derrick Ansley. We talked for a while. I’ve been up to campus like three or four times now, so I already know about all the facilities and stuff, but it was a pretty fun visit,” Turrentine explained at the Opening Regional event.
Click to expand...
“(Ansley) stopped by the school two days before I went up there, so then making the visit, it was my first time talking to him. He’s real cool. He’s put some great people in the NFL. Turrentine picked up his UT offer more than 18 months ago and he’s since collected scholarships from Alabama, LSU, Florida, Nebraska, South Carolina and Notre Dame, among others. The 6-foot, 180-pound defensive back projects as a safety in college but he participated as the Opening event as a corner. Tennessee is recruiting Turrentine simply as a versatile defensive back, capable of playing in the box or flexing out wide as a boundary corner. He did not participate in the combine events at the regional due to a upcoming state track meet, but the rising junior still showcased his natural athleticism during positional drills and 1-on-1s. “I just wanted to work, compete and be the best I could be,” he said.
Click to expand...
Teammates with top 2020 Tennessee target Keshawn Lawrence, Turrentine plans to start really focusing in on recruiting now that school is out. He’s visited Tennessee, LSU, Alabama, Vandy and Miami in the last year, but he hopes to camp and see more places this summer — including a return trip to Rocky Top. “I didn’t camp or anything last year, and I didn’t do too much college recruiting stuff because of family reasons but I will this summer,” he said. “There’s a new staff (at Tennessee) and I’m excited to get to know some of the new coaches they’ve brought in. Coach Pruitt wasn’t there last weekend, so I’m hoping to get back up there soon to talk to him.”
Click to expand...
-VQ
Likes: Orange Studs, SweetasSoda and T Dog

Four-star defensive back Andre Turrentine of Ensworth School in Nashville, Tenn., picked up his first offer almost two years ago from former Tennessee coach Butch Jones' staff, and he has visited the Vols at least a few times since then. They have made a good impression on him during that time, and Tennessee coach Jeremy Pruitt's staff has made him feel like a priority during his three visits to Knoxville since April 2018.

The Vols and LSU have emerged as two of the top contenders for the 6-foot, 175-pound Turrentine, who's a teammate and friend of Tennessee defensive back commitment Keshawn Lawrence. Turrentine also has a good relationship with four-star defensive end/linebacker Tyler Baron, one of his former Ensworth teammates.

If Tennessee lands Baron and holds onto Lawrence, Turrentine will have a couple of strong connections to the Vols, and they already are one of the teams standing out to him, although he lived in Louisiana until he was 3 and his parents are LSU fans.
Click to expand...
-Callahan
Likes: FïreBall, T Dog and SweetasSoda

Made the trip over to UT today with Keshawn Lawrence per Callahan
Likes: VOLuptuousBOOMS, T Dog, F0Rt_V0L and 6 others

Ron Swanson said:
Made the trip over to UT today with Keshawn Lawrence per Callahan
Click to expand...
Yes, could be our first solid commitment for 21.

Noticed most of the kids in the way too early 2021 ranking on 247 are from Middle TN rather than Memphis. Could change, but if not I think it means a big year for us in '21.
Likes: Vols410

“I know it’s a process,” said Turrentine, who’s ranked the No. 231 overall prospect and No. 15 cornerback in the industry-generated 247Sports Composite for the 2021 class. “I’m still weighing out my options, talking to my parents, still thinking myself. But it’s growing on me here. “I’m loving the school. I’m loving (defensive coordinator Derrick) Ansley. I like (head) coach (Jeremy) Pruitt and what they’re doing here. "I think they’re really close to doing something great.” Turrentine, who’s originally from Louisiana, said LSU, Alabama and Georgia are among the other schools standing out to him. “They’re, I think, top three, top two,” he said of the Vols. “They’re starting to creep up even more than they were.”

In addition to visiting Tennessee on Saturday, he participated in one of the Vols’ camps last month after visiting them in May for the first time in more than a year. He said he has started to like Tennessee even more recently because of “just the relationships here — I know a lot of people here — and what they’ve got going on” under Pruitt. “It’s about a year or two away from them being right up there with ‘Bama and Clemson,” Turrentine said. “It’s just relationships and how it feels here.”

Turrentine said Ansley, who’s also the Vols’ defensive backs coach, “was kind of talking to me and Keshawn, building a relationship with us” during Saturday’s visit. Ansley also made it clear that Tennessee, which gave Turrentine his first scholarship offer in October 2017, still views him as a priority. “Talked to me about my commitment, how close I am (to) committing,” Turrentine said of Ansley.

Turrentine said Lawrence, who announced his commitment to Tennessee on June 24, told him about Tennessee’s pool party about “a month ago” and invited him to make the trip to Knoxville. But Turrentine said Lawrence is “actually really not” going out of his way to try to convince Turrentine to join him in playing for the Vols. “He just asked me to come up here to kick it with them,” Turrentine said of Lawrence. “Every now and then, he’ll be like, ‘How do you like it up here?’ or whatever. He’s not really pressing me about it. “He’s kind of being a friend like that — because he is my friend — kind of being a friend about it and just letting me come up with him and kick it with him.”

While Turrentine hasn’t scheduled any additional visits, he said he’s already hoping to attend games at Tennessee and LSU this season. “I’ll definitely be back up here, since it’s so close,” he said of Tennessee. “I’m going to try to get back down to LSU for a game. I’ll just see wherever my schedule lays, and wherever I’m free, I’ll take a visit down there.”
Click to expand...
-247
Likes: F0Rt_V0L, SweetasSoda, quadlee21 and 5 others

"Its about a year or 2 away from them being right up there with Bama and Clemson ."
Aight
Likes: ScornedPapaVol, FïreBall, LittleVol and 1 other person

Visiting this weekend
Likes: SweetasSoda, T Dog, DaddyChad and 4 others

Look at my shocked face

wtorange said:
Best player on ensworth including lawrence
Click to expand...
I'll have to agree with you!! He and Lawrence both are playing safety, he looks to be the better football player of the two games I watched this year.