Every four years as a new Olympic Games gets under way and before track and field competition begins, I am always reminded of the athlete I always bring up in "who's the most remarkable Olympic athlete" discussions with other sports fanatics, as my choice is always Clarksville's own Wilma Rudolph.

For anyone who may be too young to know anything about Wilma, consider checking out her Wikipedia page for the basics of her amazing, if too short, life:
Wilma Rudolph - Wikipedia

I can never find anything any other Olympian has ever done that could top what Wilma Rudolph did before becoming the first Black woman to ever win three Olympic Gold medals because there was never another non-Paralympic athlete who ever had once been a poor, Black child who had survived scarlet fever, pneumonia, and then infantile paralysis as a result of polio.

Doctors said she would never walk again. But not only was her (and her mother's) will too strong to let that happen, Wilma not only walked, but eventually RAN. She ran so fast in time that she ended up a championship winning member of the vaunted Tennessee State Tiger Belles track team ...

And then, in 1960, became known world-wide as "the fastest woman on Earth."

If that's not one of the greatest athletic achievements of all time, I don't know what is.

Thank you, Wilma. You'll never be forgotten by this Tennessean!!!!
Likes: pamovol, Lurker, Chippo and 34 others

Also, a good read for the small fry: 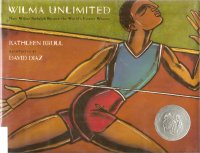 My Mother used to tell Us that Clarksville was going to have two separate (segregated) parades to honor Her, but Miss Rudolph "said", "there was only going to be one parade, or I'm not coming". Clarksville's Finest ! #TSUtigerbelle💙
Likes: Remy and LadyVols_WBK
C

Excellent article lvocd,, I read the Wikipedia
write up on her. Thank you for posting. I was
only a child when she did this
Likes: krichunaka
New posts
You must log in or register to reply here.
<< Tennessee Lady Vols Forum
Share: Facebook Twitter Email Link