In the first player that I have seen publically want to renegoiate an NIL deal, Miami basketball player Isaiah Wong wants to renegotiate his deal with LifeWallet, after LifeWallet signed an $800,000 NIL deal with guard Nigel Pack who is tranferring to Miami. Wong says he will transfer if his deal is not renegotiated. I believe the deadline is Sunday to enter the portal.

It requires wisdom to understand wisdom

BigOrangeVols said:
To Dobbs? Sure. To most other players with political science or exercise science as their major? I'm sorry to those majors but typically not worth more.
Click to expand...
Not that I disagree with you regarding the selected majors and their post graduation value (or lack thereof), however, the fault doesn't lie solely with the students. Especially for inner city kids. Their underfunded, and overall lack of equal resources for public support translate into not being able to take college preparation courses and programs. When I was in Texas, well-to do families who lived, iirc, 20 miles from the fine high school in Austin, were bused to that school. Whereas, Mexican, Black, and other less well off folks who lived only 2 or so miles away had to attend a school that reminded me of a rundown apartment complex. And absolutely didn't have what, again, iirc, a PTC "Passport to College" program. So? It meant kids from that school's academic exposure, access to higher quality teachers, hence academic competency, and even knowledge of what a viable coursework for a career even meant. So you go to college if you're lucky to manage even that, you lack the background for coursework toward high level academics. The math, the critical thinking skills, the language competency and so forth. Thus, they gravitated toward, yea, in many cases herded toward "easier" courses to avoid total academic failure. Retention i$ the name of the game. So folks who look down on these kids, first walk 4-5 miles in their shoes before doing so. There are exceptions, but they tend to be few and far in between.
V

FLVOL_79 said:
Free education is worth more in the long run...but that's just my opinion.
Click to expand...
With the kind of "education" you get in college these days, I am not so sure! In fact, it might be a negative. ... and that's all I have to say about that..

sjt18 said:
In state. I am not sure if the deal works for out of state kids or not but a recruiter could tell you.

They have a list of dozens of schools that they work with. For a 6 year enlistment, they cover tuition. Additionally, both of my sons qualified for a considerable bonus, a monthly bonus kicker for over $300, and a partial GI bill. Both saved their money from basic and tech school and still had their drill pay. Altogether between the kicker, GI bill, and pay they made over $1000/mo with tuition covered. We kicked in for fees and extra expenses.

Both graduated without debt and with something pretty significant to put on their resume. Both worked on the B-2 Bomber at Whiteman AFB.
Click to expand...
Air Force paid for two of my degrees and paid me to go get them, all tuition and fees, books, and travel. Good on ya boys!!
….and F-15s are still the King of the Skies 💪🏻
Likes: sjt18

Wasn’t sure where to put this. 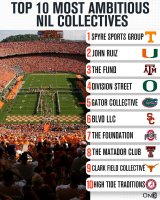 1. Spyre Sports Group (Tennessee)
No collective to date has pushed the envelope more – or been bolder and more ambitious – than this Tennessee-centric collective. Spyre Sports Group is the clear No. 1. As one industry source said, “Spyre is not messing around. They are big spenders and are smart about it.”

Spyre is also not shy about publicizing its grand vision, putting figures behind its ambition. Spyre president and co-founder Hunter Baddour said the collective is aiming to generate at least $25 million annually. The money would be put into the pockets of student-athletes (or recruits). In an ultra-competitive landscape in the SEC, this could help lure an increasing number of five-star prospects to Knoxville.

Baddour didn’t mince words to The Athletic: “We realized being involved in recruiting was going to be a priority. Then we realized how much money we were going to need to be elite. And we’re shooting to be No. 1.”