Your world frightens and confuses me

They return 11 starters from last year's team (six on offense, five on defense), including their top rusher and receiver in sophomore running back Carson Steele and senior wideout Jayshon Jackson. Steele rushed for 891 yards and six touchdowns on 192 carries in 2021 while Jackson hauled in 69 receptions for 829 yards and five touchdowns. Redshirt junior John Paddock takes over at quarterback following the departure of three-year starter Drew Plitt.

Junior linebacker Clayton Coll returns to lead the defense after finishing third on the team with 108 tackles last year to go along with five tackles for loss, 1.5 sacks, two interceptions and a forced fumble. Redshirt sophomore defensive end Tavion Woodard is also back after leading the team with five sacks in 2021.
Click to expand...
Is this coach related to the Knights Who Say Ni?

I don't know about yall, but I don't know how I am getting anything done at work today.
Likes: Tennessee Cowboy, Mccage, O.G.HomeGrownUTVOL and 1 other person

camp_steveo said:
I don't know about yall, but I don't know how I am getting anything done at work today.
Click to expand...
Same. I don't get off till 7:15, but only live 3 miles from work, so I won't miss much.
Likes: camp_steveo 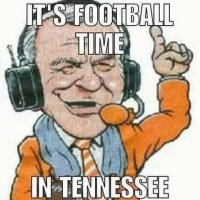 I’m at the beach and the first thing I did when I walked into the condo, was turn on the TV to check for the SEC Network. Yep, it’s there! Even rain today will not upset me, I’m so excited!
Likes: SAPPER 5 and Falcons02

Just now going to bed. Have to be at work at 5 this evening. You lucky dogs.

YankeeVol said:
Thursday Night Openers
<snip>. The other win came by a 28-11 fashion at Louisville to open the 1991 campaign.
Click to expand...
That was supposed to be Louisville's time to bust bigly onto the college football scene, they were at home, had Howard Schnelleburger (sp?), and were coming off a Fiesta Bowl win over the crimson turds. We were introduced to a couple of young men named James Little Man Stewart and Aaron Hayden ( the M&M boys, Morristown and Michigan) that night. At least that is what I remember 31 years later.
Likes: SAPPER 5, drvenner, tbones0711 and 1 other person

Current relationship with the Vols: A hot girlfriend that dumped me about 15 years ago but I’ve still stayed single and available to her and stalked her pretty regularly…..AND THINGS ARE FINALLY STARTING TO HEAT UP AGAIN 🍊🍊🍊🍊🍊🍊🍊
Likes: titansvolsfaninga, Falcons02, drvenner and 9 others

WeeohdeeWood said:
Just now going to bed. Have to be at work at 5 this evening. You lucky dogs.
Click to expand...
TIVO it.