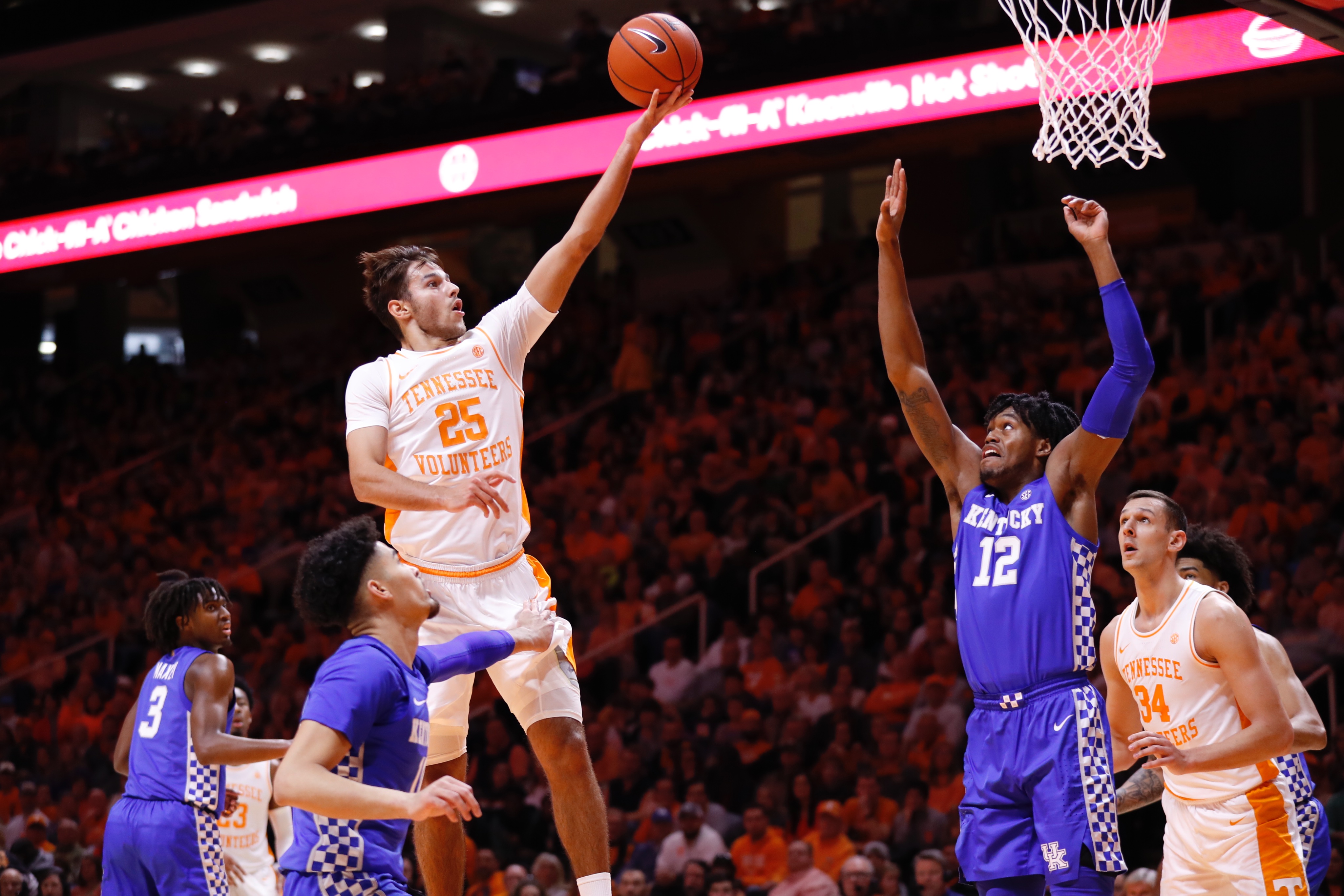 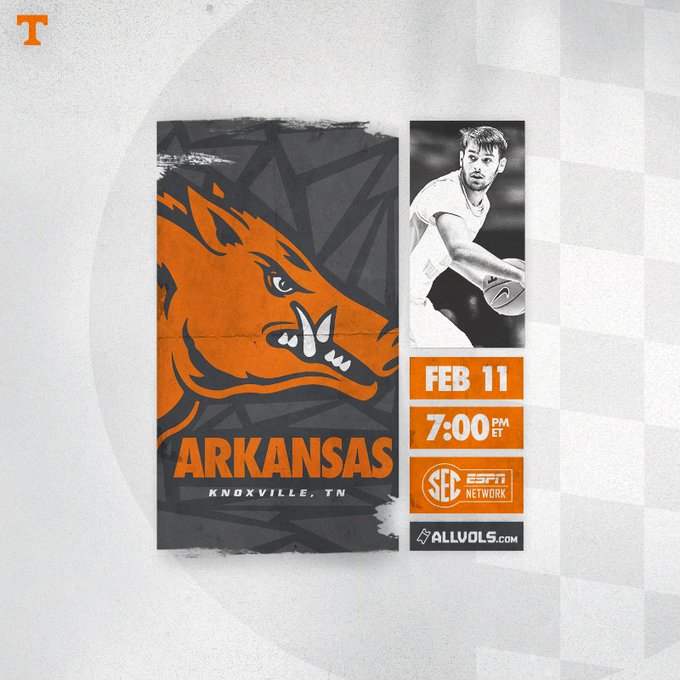 THE SERIES
• Tennessee leads its all-time series with Arkansas, 21-20, dating to 1936.
• The Vols have a 12-4 edge when the series is played in Knoxville.
• UT scored 106 points when these team met last season.
• Tennessee plays the Razorbacks in Fayetteville on Feb. 26.
Likes: The Dog, ohnnyvol1, RollerVol and 1 other person

A WIN WOULD...
• Give the Vols a three-game win streak in the series.
• Mean that Rick Barnes has logged a head-to-head victory against all but one active SEC head coach (Buzz Williams).
• Give the Vols victories in 17 of their last 18 TV appearances on the linear SEC Network. Tennessee had won 16 straight SEC Network games before its loss to Texas A&M on Jan. 28.
Likes: The Dog, ohnnyvol1, RollerVol and 1 other person

STORYLINES
• Tennessee ranks fourth nationally in average home attendance, drawing 18,934 fans per game this season.
• In SEC home games, junior forward John Fulkerson leads the Vols in scoring (14.0 ppg), rebounding (7.6 rpg) and field-goal percentage (.610).
• With 171 career 3-point makes, senior Jordan Bowden ranks tied for 10th on Tennessee's all-time list.
• Vols freshman Josiah-Jordan James has missed Tennessee's last three games with a groin injury. He had started every game prior to this setback, and his current status is day-to-day.
• Tennessee averaged 14.3 turnovers through its first 17 games but has averaged only 10.5 turnovers in its last six outings.
• The Vols have committed the exact same amount of turnovers as their opponents this season (306).
Likes: The Dog, ohnnyvol1, RollerVol and 1 other person

LAYUP LINES
• During SEC play, Tennessee leads the leagues in blocks (6.2 bpg) and owns the conference's second-best scoring defense (65.9 ppg).
• Junior forward Yves Pons has blocked at least one shot in every game this season. He leads the SEC and ranks 18th nationally with 2.7 bpg. His 3.0 bpg during SEC play also leads the league.
• Freshman point guard Santiago Vescovi has made at least one 3-pointer in every game in which he's appeared (11), averaging 2.2 made threes per game.
• For each of the last three games, Tennessee's starting lineup has featured four different nationalities (American, French, Serbian, Uruguayan).
• VFL and NBA rookie Grant Williams is averaging 15.7 minutes per game in 49 appearances for the Boston Celtics this season. The Celtics are undefeated when Williams plays at least 26 minutes.
Likes: The Dog, ohnnyvol1, RollerVol and 1 other person

ABOUT ARKANSAS
• Following a near flawless non-conference campaign, Arkansas has seen an up-and-down first 10 games of SEC play. After beginning the year 12-1, the Razorbacks currently sit at 16-7 overall and 4-6 in league play.
• The Razorbacks are coming off back-to-back overtime losses, at home against Auburn (79-76) and on the road at Missouri (83-79).
• Arkansas is led by first-year head coach Eric Musselman who comes to Fayetteville following a four-year stint at Nevada, where he won 110 games, three consecutive Mountain West regular-season titles, the 2016 CBI championship and made three consecutive trips to the NCAA Tournament. The most notable of those NCAA berths came in 2018, when the Wolfpack overcame two double-digit deficits (against Texas and Cincinnati) to advance to the Sweet Sixteen.
• Not only has Musselman brought a new staff to Arkansas, but he also added five transfers to the Razorback roster.
• Among those transfers is grad transfer guard Jimmy Whitt Jr. Whitt Jr., along with returner Mason Jones, sit atop four statistical categories for the Razorbacks. The backcourt tandem ranks first and second in scoring, rebounding, assists and steals, with Jones (20.5 ppg, 6.1 rpg, 3.4 apg and 1.8 spg) leading each category and Whitt Jr. (14.7 ppg, 4.9 rpg, 1.7 apg and 1.3 spg) following right behind him. Jones's 20.5 ppg also leads the SEC.
• Notable alumni of the University of Arkansas include current Dallas Cowboys owner, Jerry Jones. Jones graduated from Arkansas in 1965 and was a captain on the 1964 National Champion Razorback football team.
Likes: The Dog, ohnnyvol1, RollerVol and 1 other person
W

Coach Barnes is 5-5 against Arkansas according to the pregame notes.

Arkansas is one of the worst rebounding teams in the country and probably the worst major conference team. Need to dominate the defensive glass tonight. That's one area we miss James. He has the highest DR% on the team.

Need to keep feeding Fulky. I think he has a big night.
Likes: sport3500, Warriorvol and RollerVol

Seems like a good team to play zone against. A poor 3pt shooting team but they have the 5th best FG% on shots near the rim
Last edited: Feb 11, 2020
Likes: PulaskiVolFan, RollerVol and chuckb1448

I'd like to see zone a bit..... wouldn't hurt
Likes: RollerVol

Winnable if THEY don't bring their A Defense.
Likes: RollerVol
R

Went back and watched the KY game last night. This team actually played lights out defense. Pons was amazing. The all time low in 3 shot % killed us that game. Hopefully we do better tonight.

Any news on JJJ?

walkenvol said:
Can Bowden defend Jones?
Click to expand...
Well there is a rumor going around that Jones may be suspended tonight after getting into it with the coaches. Isaiah Joe is already out indefinitely so without Jones we'd be down to about 6 players and Tennessee wins by 30.

Musselman had done a great job this year with this team despite having little depth or size but we've run out of gas these last few weeks. We haven't lost a game by more than 7 this year so we're competitive but just don't have enough in us to close out games like we were earlier in the year. I think 4 of our 7 losses have been in OT.
Likes: PulaskiVolFan and tnvols72

Need this one bad
Likes: PulaskiVolFan

I know we speak of this often but I wish Bowden would start driving to the basket in the first half and build some confidence instead of waiting until midway through the second half to do it
Likes: Lankykong, Warriorvol, sport3500 and 2 others

chuckb1448 said:
I know we speak of this often but I wish Bowden would start driving to the basket in the first half and build some confidence instead of waiting until midway through the second half to do it
Click to expand...
I think that one of Bowden's issues has been that he's had a taste of possibly playing in the NBA and he's put too much pressure on himself to impress the scouts. If he'd just plan on making a living overseas and set NBA aspirations aside, maybe he can relax and his offense will come back. He needs to have fun... it's his senior year. No doubt he can play in Europe or the Far East.
Likes: sport3500 and chuckb1448

One way or the other I'm going to enjoy some smoked piggy tonight (Going to hit Central BBQ)
Likes: Warriorvol and chuckb1448

I am going out on limb here but Tennessee by 6 tonight.....Bowden will hit a late 3
New posts
You must log in or register to reply here.
<< Tennessee Vols Basketball Forum
Share: Facebook Twitter Email Link