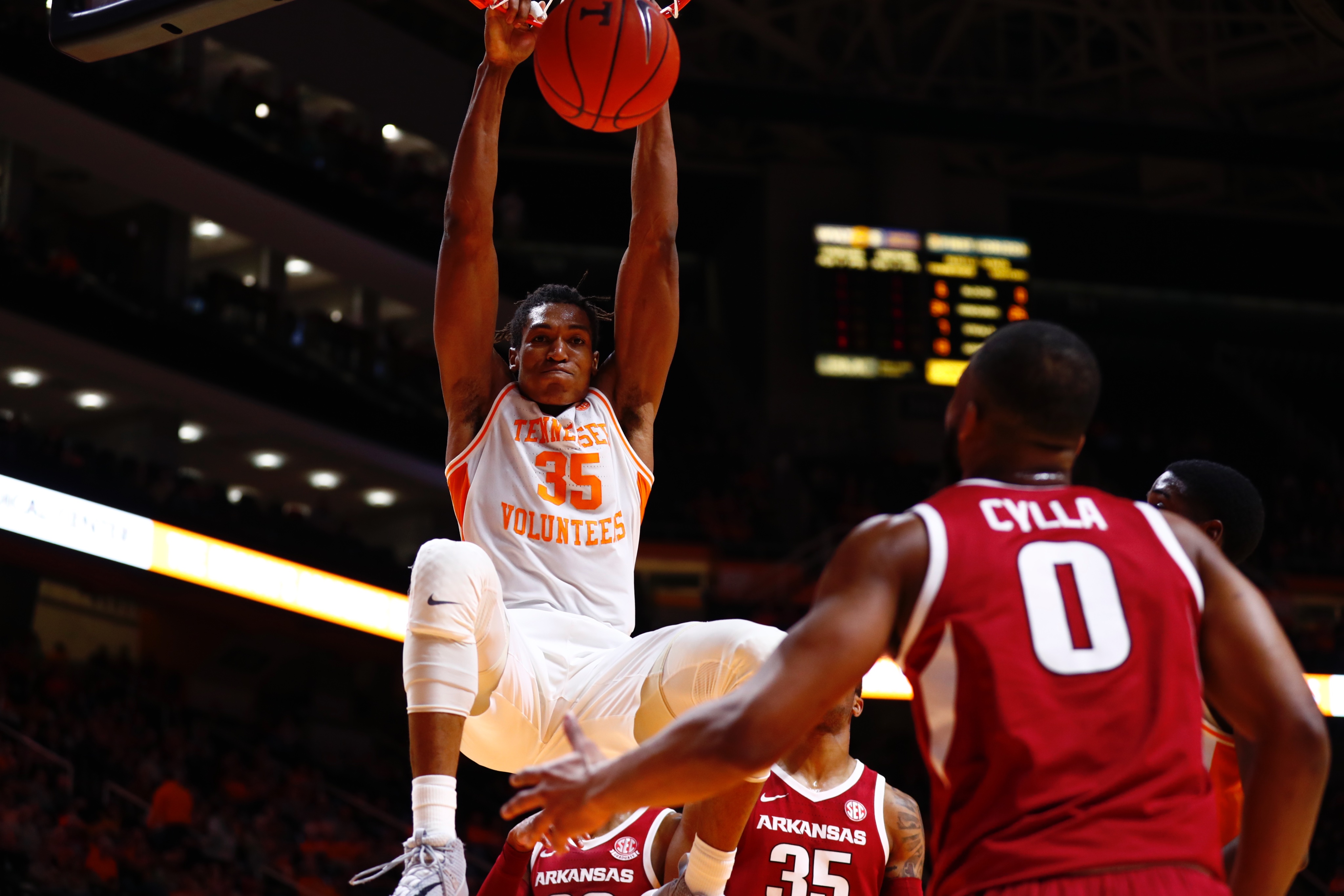 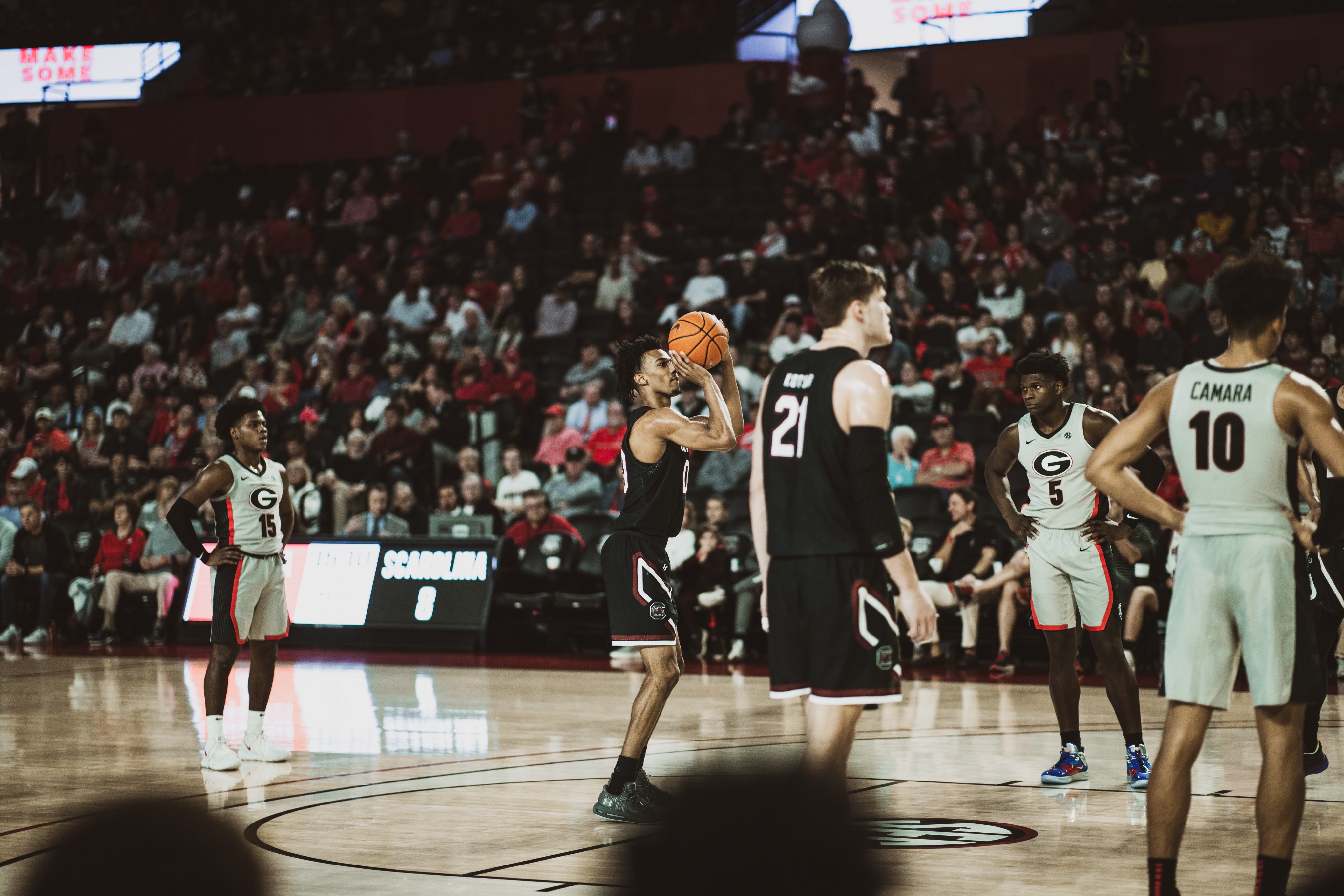 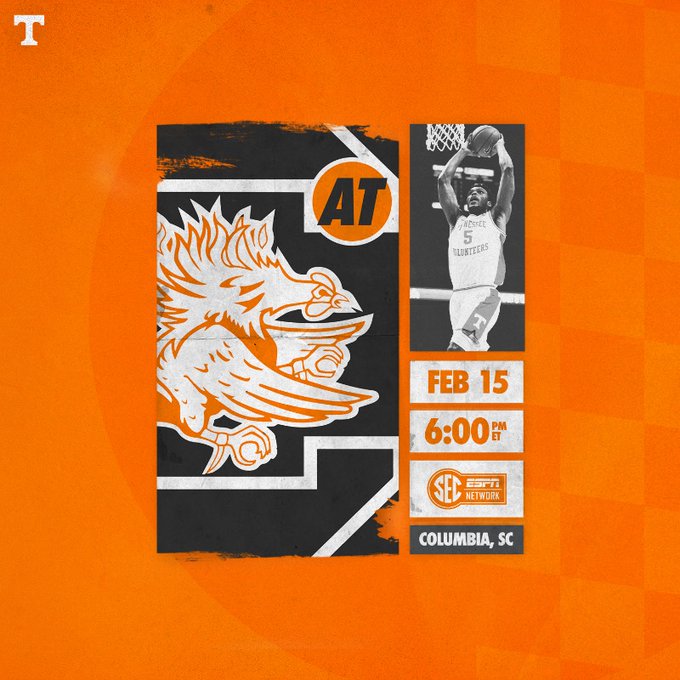 THE SERIES
• Tennessee leads the all-time series with South Carolina, 47-27, dating to 1927. The Vols are riding a five-game win streak against the Gamecocks.
• The series is deadlocked at 16-16 when contested in Columbia.
• Tennessee defeated South Carolina, 56-55, in Knoxville on Jan. 11.
Likes: FearAVolunteer, InVOLuntary, sport3500 and 2 others

A WIN WOULD…
• Give the Vols a winning record against the Gamecocks in Columbia.
• Extend UT's win streak over South Carolina to six games.
• Make Tennessee 11-0 in SEC regular-season rematch games since the start of the 2017-18 campaign.
Likes: FearAVolunteer, InVOLuntary, sport3500 and 2 others

STORYLINES
• In SEC road games, senior guard Jordan Bowden leads the Vols in scoring with 15.6 ppg. Juniors John Fulkerson (11.4 ppg) and Yves Pons (10.2 ppg) also average double-digit scoring on the road in league play.
• With 173 career 3-point makes, senior Jordan Bowden ranks 10th on Tennessee's all-time list.
• True freshman Santiago Vescovi dished out a season-high eight assists in Tuesday's win over Arkansas. He owns a 2.2 assist/turnover ratio over UT's last five games.
• Tennessee averaged 14.3 turnovers through its first 17 games but has averaged only 10.6 turnovers in its last six outings.
• Vols freshman Josiah-Jordan James has missed Tennessee's last four games with a groin injury. He had started every game prior to this setback, and his current status is day-to-day.
Likes: FearAVolunteer, InVOLuntary, volunator and 1 other person

LAYUP LINES
• During SEC play, Tennessee leads the league in blocks (6.2 bpg) and owns the conference's best scoring defense (65.5 ppg).
• Junior forward Yves Pons has blocked at least one shot in every game this season. He leads the SEC and ranks 20th nationally with 2.6 bpg. His 2.8 bpg during SEC play also leads the league.
• Freshman point guard Santiago Vescovi has made at least one 3-pointer in every game in which he's appeared (12), averaging 2.3 made threes per game.
• Barring injury or illness, senior guard Jordan Bowden will finish his career in the top five on Tennessee's list for career games played. Saturday will be the 126th game in which he's appeared.
• For three games earlier this month, Tennessee's starting lineup featured four different nationalities (American, French, Serbian, Uruguayan).
Likes: FearAVolunteer, InVOLuntary, sport3500 and 2 others

ABOUT SOUTH CAROLINA
• After falling to Tennessee on Jan. 11 in Knoxville, South Carolina has reeled off wins in seven of its last nine contests, with notable victories at home over Kentucky and on the road at Arkansas. The Gamecocks currently sit at 15-9 (7-4 SEC).
• South Carolina head coach Frank Martin has the Gamecocks trending in the right direction as the 2019-20 regular season nears its conclusion. The 7-4 SEC mark has South Carolina in a tie for fourth place in the league and in the hunt for a double-bye at the conference tournament next month.
• Senior forward Maik Kotsar continues to be a force for South Carolina on both ends of the floor. He ranks third on the Gamecocks in scoring (10.3 ppg), second in assists (2.1 apg) and first in rebounding (6.4 rpg), blocks (1.1 bpg) and steals (1.6 spg).
• Sophomore guard A.J. Lawson continues to be the Gamecocks' main scoring threat. While the Toronto, Canada, native has seen his overall scoring average drop since last facing the Vols, he has strung together one of his best stretches of games in recent weeks. In the Gamecocks' last five contests, he is averaging 15 points (eclipsing the 15-point mark three times) while scoring a game-high 20 points in South Carolina's big win at Georgia Tuesday night.
• The University of South Carolina libraries currently house the world's largest collection of work from famous author Ernest Hemingway.
• South Carolina's undergraduate enrollment is 26,733.
Likes: InVOLuntary, sport3500, volunator and 1 other person

Those Georgia jerseys in the pic are AWFUL
Likes: FearAVolunteer, InVOLuntary, TrumpedUpVol and 2 others

YankeeVol said:
THE SERIES
• Tennessee leads the all-time series with South Carolina, 47-27, dating to 1927. The Vols are riding a five-game win streak against the Gamecocks.
• The series is deadlocked at 16-16 when contested in Columbia.
• Tennessee defeated South Carolina, 56-55, in Knoxville on Jan. 11.
Click to expand...
They seem to be a different team than when we played the first time. Hate to say it but I’m seeing a double digit loss.
Likes: RollerVol
S

Roustabout said:
They seem to be a different team than when we played the first time. Hate to say it but I’m seeing a double digit loss.
Click to expand...
I think it all depends how it is officiated. If they let them play and we don't get to the line. We could lose by double digits.
Likes: PulaskiVolFan, Warriorvol, RollerVol and 2 others

YankeeVol said:
Those Georgia jerseys in the pic are AWFUL
Click to expand...
I wonder if Nike floated the Power T and Barnes said no -- Ive seen other schools with just the big logo on the chest, some look good (Arkansas) and some dont ( UGA)
Likes: sport3500 and RollerVol

Agreed on the officiating angle. I thought bama would dismantle us on their court but the refs called the game straight and we got to the FT line a lot.
Likes: PulaskiVolFan, InVOLuntary, RollerVol and 2 others

I think this game will go down to the wire again. If we continue to limit our turnovers we will have a chance. Can’t give away possessions to this team. Frank Martin is proving once again that he is a great coach. Should be a great game.
Likes: feathersax, PulaskiVolFan, volunator and 2 others
U

Rebound, dribble drive, and play solid defense and we have a good chance to win. Go Vols!
Likes: sport3500, Warriorvol and RollerVol

Good morning Volunteers! What has the experts said about this game?
Likes: UT_Dutchman and RollerVol
R

chuckb1448 said:
Good morning Volunteers! What has the experts said about this game?
Click to expand...
"we got this"...

SC is playing some good ball right now. Tn cant afford to go scoreless for 4 or 5 minutes at a time.
Likes: feathersax and PulaskiVolFan

Tennessee needs to feed Fulkerson and Pons in the post and take a limited amount of three point attempts.
Likes: feathersax, Warriorvol, UT_Dutchman and 2 others

Any word on illness? Read somewhere some players might be sick.

InVOLuntary said:
Any word on illness? Read somewhere some players might be sick.
Click to expand...
Fulkerson was sick earlier this week but he's apparently a lot better now. Pons & Johnson were also under the weather but are expected to play today.
Likes: Vols All Day, PulaskiVolFan and InVOLuntary
O

This will be extremely tough one to win.

S.C. one of hottest teams around right now. I think this is as close to a "must" win situation as you can have. Lose this and we will almost have to win out for big dance.
Likes: PulaskiVolFan

Ky getting that home cooking. a phantom call
Likes: feathersax