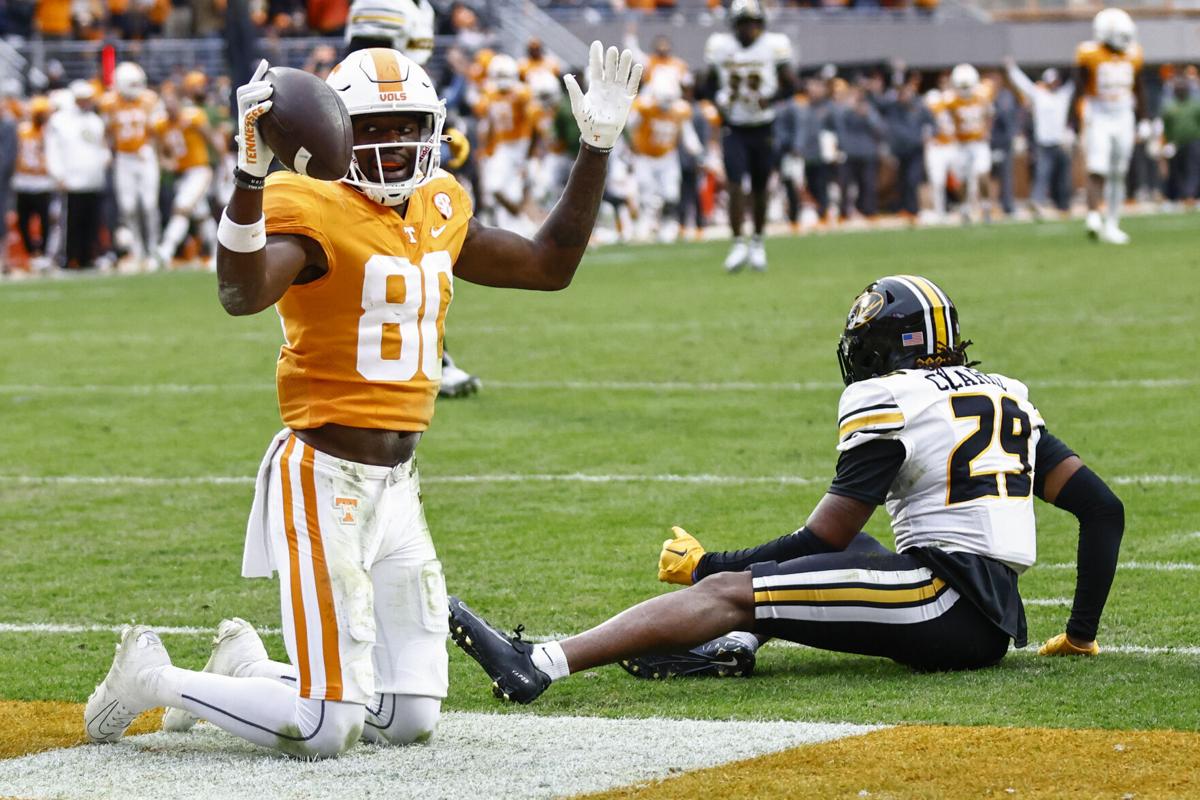 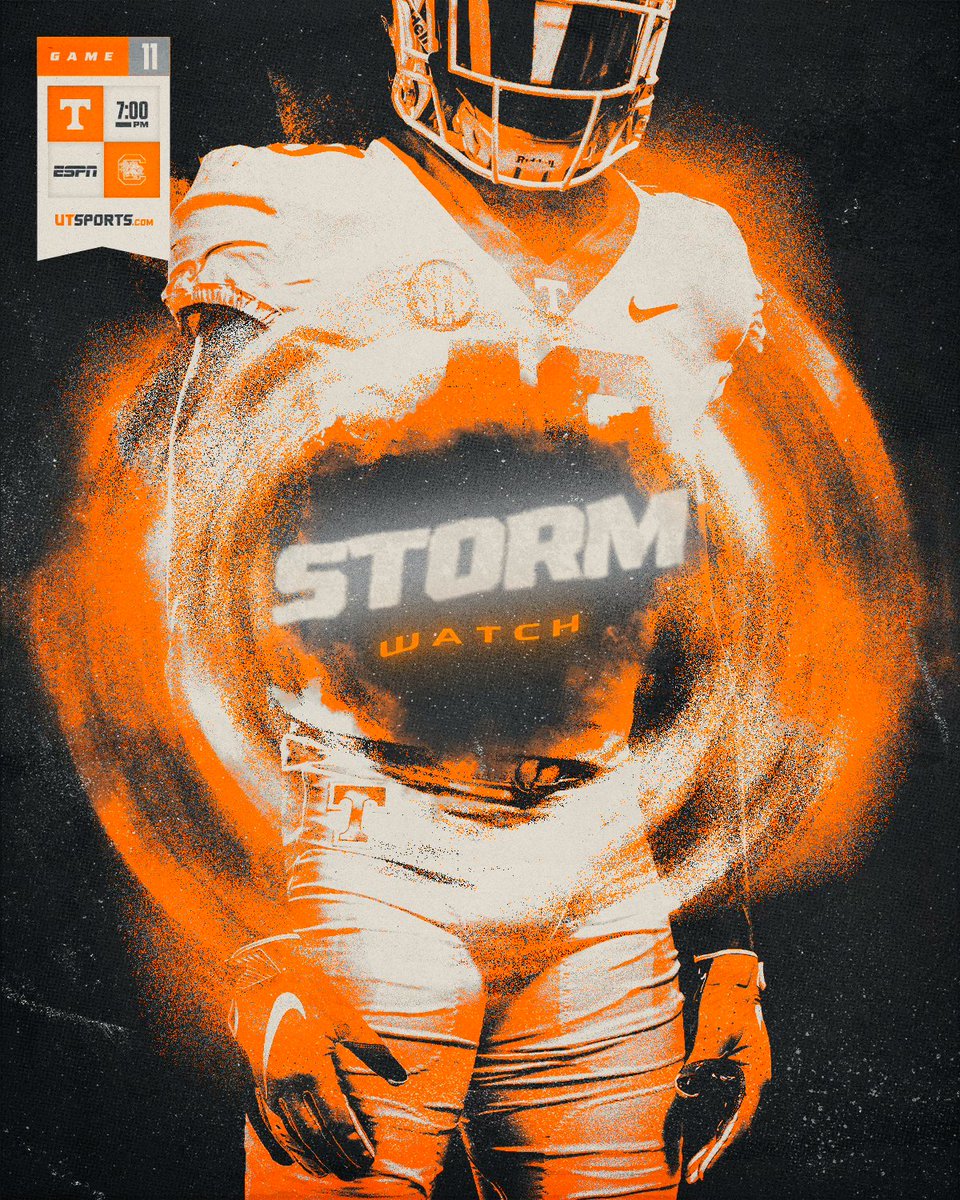 Push for the Playoff
Tennessee enters Saturday's game right in the middle of the College Football Playoff hunt, coming in at No. 5 for the second week in a row following a 66-24 thrashing of Missouri last week that saw the Big Orange set school records for points against an SEC opponent and total yards (724).

The Vols are seeking their first-ever appearance in the College Football Playoff and first trip to a New Year's Six bowl game since defeating Texas A&M 38-7 in the Cotton Bowl following the 2004 season.

Keepin' It 100
Rocky Top has become a go-to destination for wide receivers since head coach Josh Heupel arrived. Over the past two seasons, UT ranks third nationally with 18 individual 100-yard receiving performances. The Vols have had 10 individual 100-plus yard receiving games this season, which is tied for second nationally behind Ohio State's 11. Four different Tennessee pass catchers have eclipsed the 100-yard mark at least once this year (Jalin Hyatt – 5, Bru McCoy – 3, Cedric Tillman – 1, Squirrel White – 1).

Hooker to Hyatt
There hasn't been a more deadly and explosive combination in college football this season than quarterback Hendon Hooker and Hyatt. Both are having historic seasons for the Orange and White and have been racking up the honors along the way.

The tandem has been named to the semifinalist lists for the Maxwell and Walter Camp Awards. Hooker is also a finalist for the Unitas Golden Arm Award and a semifinalist for the Davey O'Brien Award while Hyatt is in the running to win the Biletnikoff Award, awarded to the nation's top receiver.

Defense Doing Its Part
While Tennessee's offense gets much of the attention, the Big Orange defense has been doing its fair share of the heavy lifting as well. In its second season under defensive coordinator Tim Banks, the Vols rank in the top 25 nationally in four different categories: rushing defense (11th - 104.1), redzone defense (20th - 76.3), turnovers gained (16th - 19) and third-down defense (25th - 32.9). UT also ranks third in the SEC with 64.0 tackles for loss and has held each of its last three opponents to seven or fewer second-half points, including shutting out Kentucky over the final two quarters in a 44-6 win on Oct. 29.

UT has been aggressive and opportunistic all year long, leading the SEC in turnovers forced (19) and turnover margin (+9). For comparison, the Vols had just 13 takeaways in 13 games last season.
Likes: General Jack, zeppelin128, GoBigOrange_2309 and 10 others

Tennessee leads, 28-10-2
The Volunteers and Gamecocks will meet for the 41st time when the two teams take the field on Saturday night. Tennessee has owned the all-time series and even has a winning record when playing in Columbia (10-7-2).

A win this weekend would mark UT's fourth straight in the series after dropping three in a row from 2016-18. Each of the last six meetings between the two programs in Columbia have come down to the wire, with all six of those contests being decided by six points or less.
Likes: General Jack, zeppelin128, MemphisVol77 and 5 others

South Carolina is led by second-year head coach Shame Beamer, son of legendary Virginia Tech coach Frank Beamer. After leading the Gamecocks to a 7-6 record and a victory over North Carolina in the Duke's May Bowl in year one, Beamer has USC bowl eligible again in 2022.

Redshirt junior quarterback Spencer Rattler leads the offense in his first year with the program after transferring from Oklahoma in the offseason. Rattler has completed 180 of 276 pass attempts for 1,982 yards and eight touchdowns but has also thrown nine interceptions.

Junior wideout Antwane Wells Jr. has been the Gamecocks top threat in the passing game with a team high 43 receptions for 590 yards and four touchdowns. Redshirt sophomore running back MarShawn Lloyd is the team's top rusher with 100 carries for 556 yards and nine touchdowns. Junior tight end Jaheim Bell is also an extremely versatile weapon for South Carolina who has totaled 18 receptions for 190 yards as well as 47 rushing attempts for 150 yards and a pair of scores.

On the defensive side of the ball, freshman defensive back Nick Emmanwori leads the team with 66 total tackles (51 solo) from the strong safety position. Redshirt sophomore edge rusher Gilber Edmond ranks first with eight tackles for loss while fellow edge rusher Jordan Burch is tops on the team with 3.5 sacks. Cornerbacks Marcellas Dial and Darius Rush each have recorded two interceptions to lead the secondary.
Likes: zeppelin128, chuckb1448, MemphisVol77 and 2 others

Live to ride. Ride to live.

Thanks. I believe it's spelled "Sock Arlina"
Phonetics. Just Sayin' 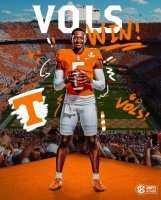 I'm still not over that mullet-headed SOB Steve Taneyhill beating us at Neyland in 92 and being a Scott Frost-level jerk about it after the game.

Owl-flavored said:
I'm still not over that mullet-headed SOB Steve Taneyhill beating us at Neyland in 92 and being a Scott Frost-level jerk about it after the game.

Vols by fitty...billion.
Click to expand...
never happened
92 was Columbia
I was there
Likes: P.O.T.S. VOL, HeadVol77, feathersax and 4 others

Click to expand...
Lol, you really have to choose that picture? … for them? 😂 😂 😂
Likes: MemphisVol77, Capt Whiskey and YankeeVol

VOLnVANDYland said:
Lol, you really have to choose that picture? … for them? 😂 😂 😂
Click to expand...
Yank has his own unique way of reminding teams they’re awful 🤣
Likes: P.O.T.S. VOL, HeadVol77, Plecoptera and 4 others

VOLnVANDYland said:
Lol, you really have to choose that picture? … for them? 😂 😂 😂
Click to expand...
I mean they lost 38-6 lol
Likes: HeadVol77, Plecoptera, MemphisVol77 and 3 others

Wear all the sunglasses you want Beamer nothing can help you now
Likes: Plecoptera, norrislakevol and MemphisVol77

Can Hyatt match their win total with touchdowns in one game?

My condolences to all the Vol fans who have to park at Williams Brice
Likes: chuckb1448, HeadVol77, MemphisVol77 and 2 others

South Carolina will always be one I notice on our schedule pretty quick. In 2013 Butch beat them while ranked. It was like we won the Super Bowl and FIFA Cup all at the same time. Times change and CJP is on his way. And I’ll always dislike South Carolina because for a minute they convinced me they were good-and I’m a little disappointed in myself

Been fighting a kidney stone since Monday, just passed it a few minutes ago. It's a sign, we winning tomorrow, and the playoffs 👀🤣
Likes: ABINGDON VOL FAN, tbh, HeadVol77 and 13 others