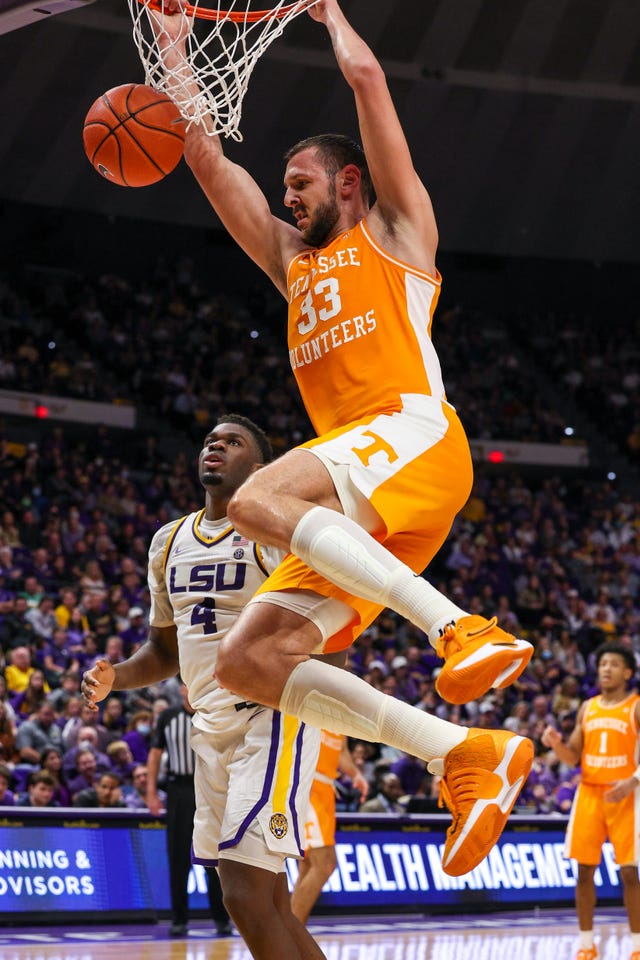 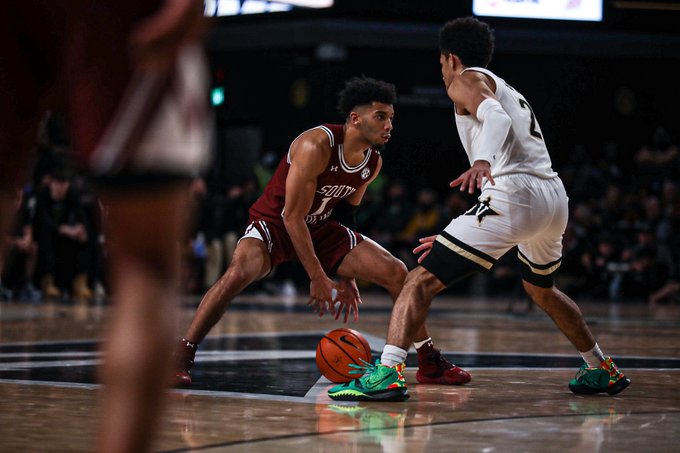 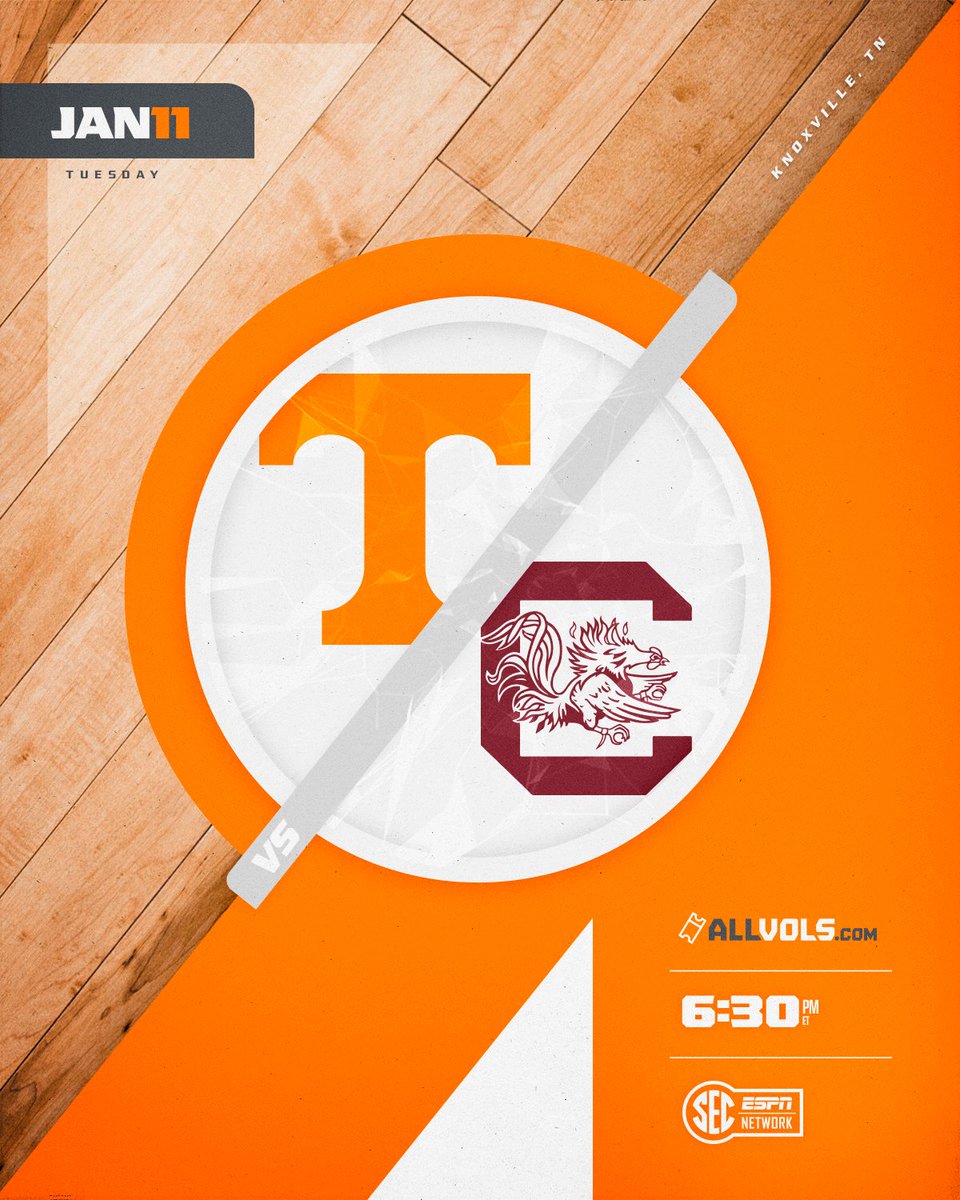 • Tennessee leads the all-time series with South Carolina, 48-28, dating to 1927. The Vols have won six of their last seven games against the Gamecocks.
• The Volunteers own a 29-9 lead when this series is contested in Knoxville and have won four straight over the Gamecocks at Thompson-Boling Arena.
• Victor Bailey Jr.'s best outing as a Vol came during last season's home win over South Carolina. See "Last Meeting" note below.
• Tuesday marks the 19th head-to-head meeting between good friends Rick Barnes and Frank Martin. See note below.
• The Volunteers are riding a nine-game win streak at Thompson-Boling Arena, dating to last season.
• In its last home game, Tennessee forced Ole Miss to commit 27 turnovers—a Barnes-era record.
Likes: Vols All Day, Volfan1000, InVOLuntary and 2 others

• According to KenPom, the Vols rank third in the nation in adjusted defensive efficiency, allowing only 87.7 points per 100 possessions. College teams typically average close to 70 possessions per game.
• The Vols rank among the Division I top 15 in turnover margin (+6.3, 6th), steals per game (10.6, 8th), assists per game (17.6, 13th) and assist/turnover ratio (1.49, 15th).
• Tennessee's 11.8 turnovers per game is the lowest (best) average in the SEC.
• The Vols have pulled down 10 or more offensive rebounds in 11 games this season, including each of the last seven.
• The Vols are attempting 8.3 more 3-pointers per game than they did last season (28.2 per game compared to 19.9). In wins, UT is shooting .375 from long range. In losses, that average drops to .200.
• Tennessee is one of only three SEC teams that has yet to surrender 80 points this season, joining LSU and Ole Miss.
• Each of the four teams that have beaten Tennessee this season are ranked in this week's AP Top 25.
Likes: Vols All Day, Volfan1000, InVOLuntary and 3 others

• Junior guard Santiago Vescovi has made at least three 3-pointers in each of the last four games. His 3.33 makes per game during SEC play ranks third in the league.
• Junior forward Uros Plavsic is averaging 8.0 points and 5.0 rebounds over UT's last two games. He scored a season-high 12 points Saturday at LSU.
• Kennedy Chandler's 2.31 steals per game lead all Division I true freshmen. And his 5.2 assists per game rank second nationally among true freshmen.
• Chandler ranks second in the SEC and 14th nationally with 2.31 steals per game.
• The SEC record for career games played is 152, held by Kentucky's Darius Miller (2008-12). John Fulkerson is closing in, having now appeared in a Tennessee-record 144 career games.
• Fulkerson also is just 18 points shy of 1,000 for his career.
Likes: Vols All Day, Volfan1000, InVOLuntary and 2 others

• South Carolina (10-4, 1-1 SEC) enters Tuesday's game having split its first two SEC games—falling to No. 9 Auburn at home, 81-66, before winning at Vanderbilt on Saturday, 72-70.
• The non-conference portion of South Carolina's schedule featured notable wins over Florida State and UAB, but losses to Princeton, Coastal Carolina and Clemson.
• The Gamecocks are 1-2 in true road games this season.
• South Carolina ranks 40th in the country in adjusted defensive efficiency, allowing 94.9 points per 100 possessions. The Gamecocks rank 188th in adjusted offensive efficiency, scoring 102.7 points per 100 possessions.
• The Gamecocks' leading scorer, senior guard Erik Stevenson, is averaging 17.0 points per game through South Carolina's first two SEC games. Stevenson is in his first season at South Carolina, having transferred from Washington. Prior to playing the 2020-21 season at Washington, Stevenson played two seasons at Wichita State.
• In total, South Carolina added six incoming transfers this season.
• The Gamecocks rank 17th in the nation and second in the SEC with 13.5 offensive rebounds per game.
• South Carolina is also holding its opponents to shooting 38.3 percent from the field, a mark that ranks 20th in the nation and third in the SEC.
• Tennessee freshman guard Zakai Zeigler has a history playing against a pair of players on the Gamecocks' roster. Zeigler played against South Carolina sophomore forward Josh Gray when they both attended high school in Long Island, N.Y. and played against freshman forward Ta'Quan Woodley in various AAU tournaments and camps.
Likes: Vols All Day, Volfan1000, InVOLuntary and 1 other person
G

Will we ever be relevant again?

Hope our offense shows up.
Likes: Vols All Day and Plecoptera

Not sure what to expect tomorrow. This team will struggle to beat anyone if we can’t shoot, yet can play with anyone with any consistent shooting. I just don’t know who else can shoot except Vescovi, and he goes in major droughts, too, while Powell needs more looks.

I was hopeful Chandler could take it to the hole more but …. Go Vols!
Likes: GiveHim6InSC

SC has a bad offense, good defense and plays uptempo…should be interesting.
W

That’s a surprising amount of points to give up by a team who’s lost 2 of the last 3 with an ugly win sandwiched between the losses. Would have expected about half that.
Likes: YankeeVol and VOLnVANDYland

Reminds me of the hours leading up to the Ole Miss game.

Better be prepared and not overlook this game leading to Ky.
O

Reminds me of the hours leading up to the Ole Miss game.

Better be prepared and not overlook this game leading to Ky.

Should be an easy win. But with this team and coaching staff that's never a guarantee
Likes: VollerNbham and DooleyOrangePants

bleedingTNorange said:
SC has a bad offense, good defense and plays uptempo…should be interesting.
Click to expand...
Probably gonna be more interesting than most of these fans want considering they are already talking about Kentucky.
W

mr.checkerboards said:
Should be an easy win. But with this team and coaching staff that's never a guarantee
Click to expand...
Stole this post from a bama board right before their Mizzu game? League games in the SEC are rarely ever guaranteed wins for anybody
Likes: Plecoptera

Ill beat everybody to the punch on this comment....."This game is over!"

Everything woke turns to sh*t

bleedingTNorange said:
SC has a bad offense, good defense and plays uptempo…should be interesting.
Click to expand...
I don’t think I’d go as far as saying their offense is “bad”. It’s just not good lol

Should be an interesting game.
T

Tennessee must shoot well, or find an inside presence tonight, or we all might be scratching our heads again about 8:30 pm. Also, 34 turnovers the last 2 games combined. When you’re not shooting well, those turnovers become even more glaring.

I‘m glad we are dealing with our current problems now, instead of later. Playing Alabama, LSU, and Kentucky on the road was a recipe for 3 early losses. At least our current troubles synced up with what was probably going to be losses, more than likely. Get this fixed now, and the schedule gets less intimidating, and we make a good run from here on out. Find a few answers, and the schedule will be a positive moving forward. Of course, basketball always has been about putting the ball in the hole. We must find a way to do that.
Likes: ndubvols, Plecoptera, walkenvol and 2 others

walkenvol said:
Stole this post from a bama board right before their Mizzu game? League games in the SEC are rarely ever guaranteed wins for anybody
Click to expand...
If this team is as good as it was thought to be pre season and the Ken Pom rankings suggest, it should be a guarantee. Road games I'll agree but never at home

That line is kind of crazy, tbh. I don’t know how anyone could think we should be favored by 15 points based on recent trends. Guess we’ll see.
Likes: wmcovol, VolBalls33 and walkenvol
O

Martin makes NCAA or is gone. USC tried to get rid of him last year but a legislator interfered. He's pretty desperate. This team is a mixed bag but plays okay defense. Two best players returning were Bryant and Couisnard who have yet to be healthy. Bryant is really struggling.