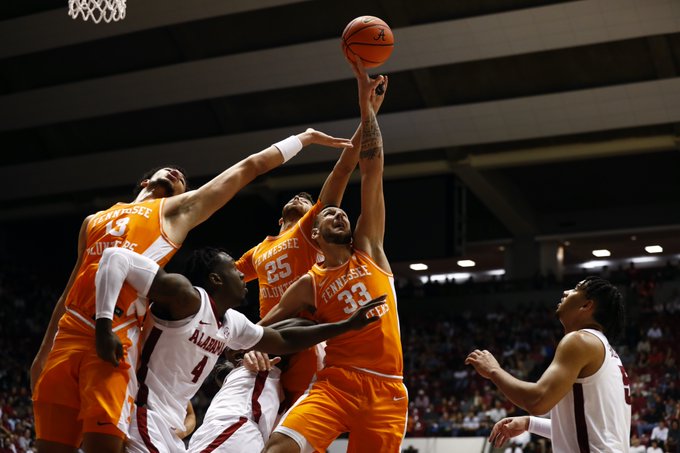 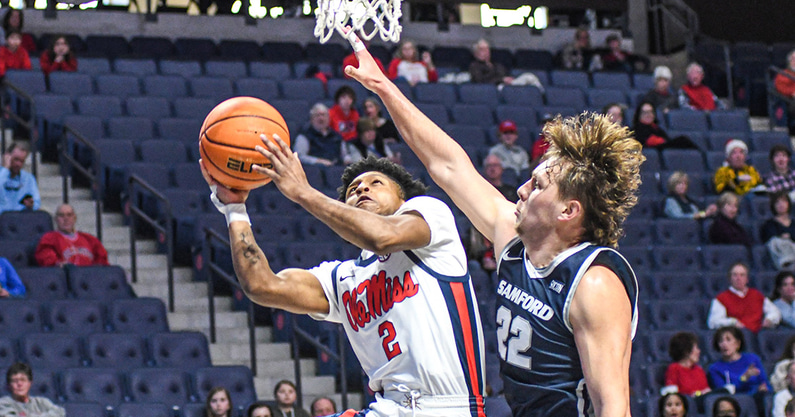 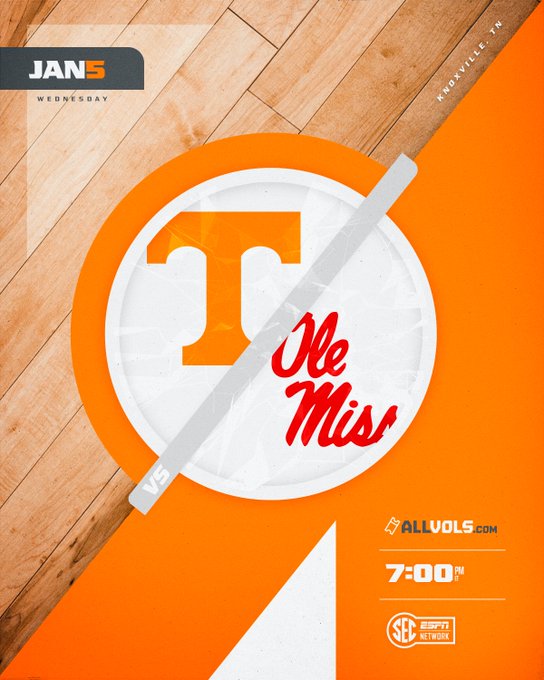 • Tennessee leads the all-time series with Ole Miss, 75-45, dating to 1924.
• When the series is contested in Knoxville, the Vols own a 43-12 advantage.
• While Ole Miss won last season's meeting in Oxford (52-50), the Vols have won five of the last six in this series.
• Ole Miss had its scheduled SEC opener (Dec. 29) against Florida postponed, so the Rebels haven't played since a 75-73 home loss to Samford on Dec. 21.
• The last time these programs met in Knoxville, John Fulkerson scored 16 first-half points en route to an 18-point, 10-rebound double-double that fueled UT to a 25-point win (73-48).
• In that same game, Olivier Nkamhoua shot a perfect 3-of-3 from the field and 4-of-4 from the foul line while totaling 10 points, one assist and two blocks in 19 minutes as a true freshman.
Likes: xtremevolfan, feathersax, hooter vol and 2 others

• According to KenPom, the Vols rank second in the nation in adjusted defensive efficiency, allowing only 85.7 points per 100 possessions. College teams typically average close to 70 possessions per game.
• The Vols rank among the Division I top 10 in turnover margin (+6.6, 6th) and assist/turnover ratio (+1.64, 8th).
• Tennessee's 10.9 turnovers per game is the lowest (best) average in the SEC.
• Tennessee owns a +28.7 scoring margin at home this season (85.6 ppg to 56.9 ppg).
• 43 percent of Tennessee's points this season have been scored by first-year Vols (402 of 930).
• The Vols are attempting 8.2 more 3-pointers per game than they did last season (28.1 per game compared to 19.9). In wins, UT is shooting .386 from long range. In losses, that average drops to .188.
• Tennessee ranks fifth nationally in average home attendance this season, drawing 16,692 fans per game at Thompson-Boling Arena.
Likes: xtremevolfan, feathersax, hooter vol and 2 others

• Tennessee was without its first- and third-leading scorers last week at Alabama, as Kennedy Chandler and John Fulkerson did not travel due to COVID management protocols.
• Chandler's 5.3 assists per game rank second in Division I among true freshmen.
• If Fulkerson returns to action Wednesday, it will be his 143rd career game played as a Vol. He will pass Wayne Chism (142 from 2006-10) to stand alone atop Tennessee's all-time games played list. See note below.
• The SEC record for career games played is 152, held by Kentucky's Darius Miller (2008-12).
• With Fulkerson out, forwards Olivier Nkamhoua (15), Brandon Huntley-Hatfield (8) and Uros Plavsic (6) combined to give the Vols 29 points at Alabama.
• Junior guard Santiago Vescovi has 13 steals over UT's last five games (2.6 spg).
Likes: xtremevolfan, tnhunter 10, feathersax and 1 other person

• Ole Miss travels to Knoxville with an 8-4 overall record. The Rebels' initially-scheduled SEC opener against Florida last Wednesday was postponed after COVID issues arose within the Florida program, making Wednesday's matchup with Tennessee Ole Miss' first SEC game of the season and first game at all since Dec. 21.
• In its non-conference portion of the schedule, the Rebels posted home wins over the likes of Memphis, Middle Tennessee and Dayton, while falling to Marquette, Boise State and Western Kentucky on neutral courts. Most recently, Ole Miss fell to Samford at home on Dec. 21, 75-73.
• Ole Miss has yet to play a true road game this season.
• Rebels' head coach Kermit Davis is in his fourth season at the helm of Ole Miss' program, having posted a 59-46 during his time in Oxford.
• Graduate 7-foot center Nysier Brooks leads the team in rebounds (7.8 rpg), blocks (0.9 bpg) and is third on the team in scoring (8.9 ppg). Brooks is in his first season at Ole Miss after spending two seasons at Miami (2019-21) and three seasons at Cincinnati (2016-19).
• After suffering a fractured hand in the season-opener, freshman guard Daeshun Ruffin has returned from a four-week absence to register three straight standout performances for the Rebels, averaging 16.0 points, 2.7 assists, 1.7 steals in Ole Miss' last three games. Ruffin, a top-40 prospect in the class of 2021, is Ole Miss' first McDonald's All-American signee in school history.
• The Rebels' leading scorer, senior guard Jarkel Joiner, is averaging 14.8 points per game and has scored in double figures during all but one of Ole Miss' games this season.
Likes: xtremevolfan, tnhunter 10, InVOLuntary and 2 others
V

Always a tough battle against Mississippi no matter the venue.
Likes: StarRaider

Good grief that line. Ole Miss must be really bad.

YankeeVol said:
ABOUT OLE MISS
• Ole Miss travels to Knoxville with an 8-4 overall record. The Rebels' initially-scheduled SEC opener against Florida last Wednesday was postponed after COVID issues arose within the Florida program...
Click to expand...
Not a good look to catch any disease that a Florida team had...
Likes: StarRaider

Anything but an absolute Ass kicking is unacceptable! There should be plenty of motivation!
Likes: Volfan1000, camp_steveo, Plecoptera and 1 other person

First true road game for Ole Miss and they are going to be short handed. That’s a recipe for a 20 point blowout.
Likes: camp_steveo

VolPack22 said:
First true road game for Ole Miss and they are going to be short handed. That’s a recipe for a 20 point blowout.
Click to expand...
How many are they missing. I’m lazy and haven’t followed the latest. Just know they have covid issues

GBO18 said:
Good grief that line. Ole Miss must be really bad.
Click to expand...
They beat Memphis so they’re not awful. They are missing a ton of players though due to injuries and COVID. That’s why the line is so high.

TheMookieMonster said:
They beat Memphis so they’re not awful. They are missing a ton of players though due to injuries and COVID. That’s why the line is so high.

Can’t lose this game. No excuse.
Click to expand...
Even at full strength metrics have this as a 13-14 point Tennessee win in Knoxville
Likes: ArdentVol

Joiner out with his back injury but others will be out with COVID. Really interested to see who is out. Ole Miss isn't exactly deep when it comes to scoring. Their defense is solid though.

If that freshman, Ruffin, is out along with Joiner, I don't know if I see Ole Miss scoring much more than 50 points.
C

Beware the “no way we can lose” mindset.
Likes: Willy14, dogsoldiersc, Plecoptera and 8 others
D

Talking Over/Under. I don't like sub 140 Under but these are 2 good defensive teams. However Vols are at home and we can expect big offensive production. Any thoughts?

Just hoping we win, still slightly nauseated from leading Bama the entire game then losing... hopefully we get on the right track tonight...

Payback for the BS football game.
Click to expand...
Squirt ketchup on Kermit Davis if we lose.
Likes: StarRaider and chuckiepoo