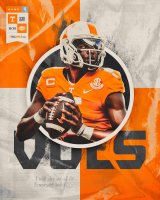 NEED TO KNOW
#CheckerNeyland
Saturday's game will mark the sixth iteration of #CheckerNeyland, which showcases Tennessee's iconic checkerboard pattern throughout the stadium. The contest also marks the second consecutive sellout at Neyland Stadium, a first since the 2016 season when the stadium was sold out for games against Florida (Sept. 24, 2016) and Alabama (Oct. 15, 2016).

To find out if your seat section is orange or white, go to CheckerNeyland.com and enter your section/row/seat number as it appears on your digital ticket. Fans in the North End Zone Party Deck are encouraged to wear white.

Offense Flying High
A year after setting a school record for points in a season and becoming the FBS' most improved offense (No. 7, 39.3 ppg), Tennessee's offense is still thriving. The Vols are averaging 52.0 points per game, which is No. 1 in the SEC and No. 4 in the FBS. UT has put up at least 30 points in six straight games, a first since they did it in seven straight games from 2016-17. The Big Orange average 553.7 yards per game of total offense this season, a mark that ranks No. 1 in the SEC and No. 3 in the FBS. Tennessee's passing offense ranks No. 5 in the FBS and No. 2 in the SEC with 371.3 yards per game through the air.

Vols Starting Fast
With a sold-out, raucous crowd on hand, Tennessee will be looking for another one of its patented fast starts on Saturday. The Vols have outscored their opponents by an amazing 228-61 margin in the first quarter since Josh Heupel took over as head coach, including 190-51 in 2021 and 38-10 this season. UT has scored at least one touchdown in the first quarter in every game under Heupel (16 games).

We Play Defense Too
While Tennessee's high-powered offense gets most of the headlines, the defense has continued to improve under coordinator Tim Banks. The Vols are allowing just 14.3 points per game, have forced multiple turnovers in three of their first four games and are ranked third in the league in third-down conversion stops (11-of-46, 23.9%) this season. After ranking second in the SEC in tackles for loss last season with 102, the Big Orange have picked up where they left off with 22 TFLs through three games this year, good for third in the league. UT is also third in the SEC in sacks with eight.
Likes: malinoisvol, SAPPER 5, hjeagle1vol and 14 others

Your world frightens and confuses me

SERIES HISTORY
Florida leads series, 31-20
Tennessee will be looking to end a five-game skid to Florida. The Vols' last win in the series came in 2016 when they scored 38 unanswered points to rally from a 21-3 halftime deficit and take down the Gators, 38-28, in Knoxville.
Likes: SAPPER 5, hjeagle1vol, 5FingerVolPunch and 8 others

ABOUT FLORIDA
The Gators, led by first-year head coach Billy Napier, enter Saturday's game with a 2-1 record after escaping with a 31-28 victory over South Florida last Saturday. Florida opened the year with an impressive victory over No. 7 Utah before falling to Kentucky, 26-16, in its SEC opener a week later. Saturday's contest will be UF's first road game of the season after opening the year with three straight at home.

Dual-threat quarterback Anthony Richardson leads the Gators' attack, combining for 557 yards of total offense and three touchdowns (all rushing) entering the game. Arizona State transfer wideout Ricky Pearsall leads the team with 120 receiving yards while Xavier Henderson leads the team with 15 receptions. On the ground, the duo of Montrell Johnson Jr. and Trevor Etienne have carried the bulk of the load, combining for 406 rushing yards and four touchdowns.

Defensively, senior Trey Dean III leads UF in tackles (30) and tackles for loss (2.5) from the safety position. The Gators' secondary has been opportunistic with four interceptions already this season. Four different players have recorded a pick for Florida, including Jalen Kimber, who had a 39-yard pick six last Saturday against USF.
Likes: 5FingerVolPunch, Behr, VolPack22 and 4 others

Likes: WeNeedaQB, friVOLity, SAPPER 5 and 12 others

If they play bump and run give ‘em a go and throw your hand up. To much speed to much talent.

You just thought it was loud before…

powder keg and all Florida has to do is make a mistake early and it’ll hit another level.
Likes: volfan__18, SAPPER 5, Vol in Buckeye Land and 9 others

This game shouldn’t be close and I hope like hell Tennessee does not let them hang around
Likes: volfan__18, SAPPER 5, 5FingerVolPunch and 8 others

I wanna hurt these people
Likes: BubbaDoc, Vol in Buckeye Land, CornbreadVol and 2 others

Defense needs to come out and set the tone early:

Make them earn every fkn inch and make damn sure they feel every hit legally of course.
Likes: volfan__18, SAPPER 5, guido4198 and 2 others

We don't have to know who wins, thats why they play the games. Only 2 ways this goes, close tight battle to the end or UT runs away with it. Neither would surprise me.
Likes: Proud Army Wife and DD4ME 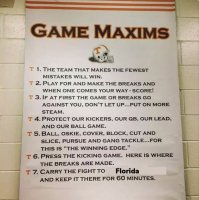 Jeff Clark said:
The Vols are going to crush the Gators 45-28 in a game that will never be close. I think Henson Hooker will throw for 307 yards and 3 touchdowns and run for 1 touchdown.
Click to expand...
That would be a shocker. Not the score, but the TDs by Henson 😀
Likes: SAPPER 5, hjeagle1vol and DD4ME

Defer to the 2nd half and get a quick 3 and out.

Watch the ground shake.
The noise level rise.
The ringing in your ears sounds like a dial tone.
Rocky Top is not playing occasionally it’s on repeat.
Smokey starts to howl
The crowd has become a rabid sea of orange and white

And your only 2 minutes into the game and this Hooker ain’t turning tricks but throwing touchdowns.

Tell me Billy what do you do?
Likes: jhcrane14, SAPPER 5, Vol in Buckeye Land and 7 others