Question: How many goals have the Lady Vols surrendered this season.
Likes: Bret178, StrangeVol and mad4vols 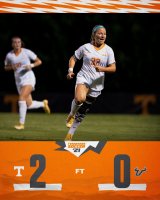 TAMPA, Fla. – No. 22 Tennessee extended its win streak to five and defeated its first ranked opponent of the season on Thursday, taking a 2-0 victory over a USF team that was receiving votes in the United Soccer Coaches Poll and ranked No. 23 by Top Drawer Soccer.

Redshirt-junior Brooke Wilson and senior Mackenzie George were the goal scorers for UT (5-0-0), while junior Lindsey Romigrecorded the shutout in goal. Romig had three saves on the day to stretch UT's streak of shutouts to five.

USF (3-2-0) out-shot Tennessee 18-14, though Tennessee managed 10 shots on target while The Bulls only had three on frame.

"This was a great team win. This is a tough place to play, against a very good opponent - a fantastic possession team. We dug in and showed the toughness that it takes to win big games. We weathered a few USF storms but kept plugging away and kept fighting," said Tennessee head coach Brian Pensky.

"Of course, somebody's got to make a play, and none other than Brooke Wilson stepped up. We're all so darn happy for her! And then Mackenzie George adding that second goal was the dagger we needed. After that, our entire team did a nice job just killing off the game."

The match got off to a slow start, with neither team managing to get a shot off before lightning delayed the game for 30 minutes just under 10 minutes into the contest. South Florida knocked a couple off the crossbar early on after play resumed, and Tennessee fired off seven shots at the other end, but the score remained knotted at zero through the first 45 minutes.

The second half was back and forth until Wilson scored the game-winner in the 73rd minute, driving a ball low and past the keeper. George added another eight minutes later, giving Tennessee some insurance.

"This is a good stepping stone for our team. Showing ourselves that we can go on the road and win tough games. It's nice to be heading back to Knoxville with this win, but we have a quick turnaround and need to start preparing for another good possession team in High Point on Sunday," said Pensky.

UP NEXT: UT returns home to host High Point in a 6:30 p.m. ET contest on Sunday at Regal Stadium. The game will be streamed on SECN+.

450 AND COUNTING: Tennessee has held opponents scoreless for 450 minutes, opening the season with five straight shutouts for the first time in program history.

That was a very good win. Our defense is no joke. I love that we are pressing up with our defense. Also, it was great to see another team hit the crossbar twice in one game. 5-0 ain't a bad place to be.
Likes: kregman, mad4vols, volfan__18 and 1 other person

StrangeVol said:
That was a very good win. Our defense is no joke. I love that we are pressing up with our defense. Also, it was great to see another team hit the crossbar twice in one game. 5-0 ain't a bad place to be.
Click to expand...
Do you think we are better than the preseason predictions that came out saying Tennessee would finish 5th in the SEC?
S

mad4vols said:
Do you think we are better than the preseason predictions that came out saying Tennessee would finish 5th in the SEC?
Click to expand...
I think we definitely have the potential to be better than 5th in the SEC. But that is potential only at this point. If we stay aggressive, I can see us having a very good season and being among the top three. Much of our future success will depend on coaching and having the mental discipline to continue to take the match to the other side and control possessions. Also, keep your eye on #3, defender Abbey Burdette, in the midfield. She's doing serious, gritty work and is all over the pitch.
Last edited: Sep 3, 2021
Likes: Rickster and mad4vols

One of UT’s finest.

I like we are pretty relentlessly on the attack.
Likes: StrangeVol and mad4vols

KNOXVILLE, Tenn. -- No. 22 Tennessee will look to extend its win streak to six on Sunday as it hosts High Point for a 6:30 p.m. ET match at Regal Soccer Stadium. The game will be streamed on SECN+.

UT is coming off a 2-0 win on the road against its first ranked opponent of the season in a USF team that is receiving votes in the United Soccer Coaches Poll and is ranked No. 23 by Top Drawer Soccer. At 5-0 on the season, it's the best start a UT team has had since 2017 when the Vols opened the season with nine straight wins.

High Point is looking for its first win of the season, holding a record of 0-3-1. In their most recent outing, the Panthers fell to East Carolina, 1-2. HPU was picked to finish first in the Big South by the league's coaches in the 2021 preseason poll.

It is the first matchup between the two programs. UT is 9-0-1 all-time against Big South opponents.

Several food trucks will be on-site for UT's Foodies Paradise night, and the first 100 children in attendance can follow dinner up with dessert at the Sunday Sundae & toppings bar. Full details utsports.com/FanHQ.

UP NEXT: Tennessee will hit the road again next Sunday, traveling to Chattanooga for a 6 p.m. matchup.
300 CLUB: With the win against USF, UT's 26-year-old program logged its 300th victory. It becomes just the fourth SEC team to reach that milestone, right on the heels of Auburn who achieved its 300th program win on Aug. 26 against Troy. UT boasts the third-best all-time winning percentage in the league at .615.

HOT START: Tennessee has started the season with five straight shutouts for the first time in team history. Previously, the longest stretch of shutouts to start the season was three games in 2015.

THAT'S A LOT OF GOALS: Tennessee's 20 goals through five games ranks third in the country for total goals scored.

LOCKDOWN DEFENSE: The Vols' back line has tallied 450 scoreless minutes, limiting opposing teams to a combined 13 shots on goal and 10 corner kicks over the last five games.

MAY WE ASSIST YOU: UT's 19 assists ranks seventh in the nation and second in the SEC behind only Georgia.

A BALANCED ATTACK: With Mackenzie George scoring her first goal of the season against USF, 11 different Vols have scored at least one goal this season.

BENCH CONTRIBUTING: Nine of UT's 20 goals have been scored by players coming off the bench.
Likes: StrangeVol and Rickster 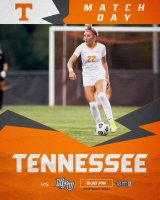 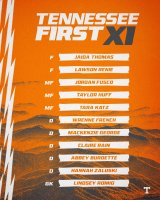 Dipasupil's penalty the difference after the first 45. 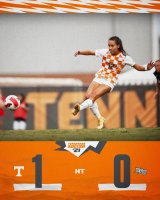 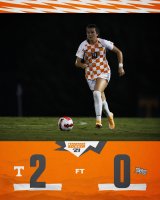 KNOXVILLE, Tenn. – No. 22 Tennessee got its sixth straight shutout on Sunday night, taking a 2-0 victory over High Point.

"This is six games without giving up a goal, so we're pretty proud of that," said Tennessee head coach Brian Pensky. "It's about not giving away opportunities and not giving away goals. Obviously, we gave up some chances at South Florida, but that's a great team. But beyond that game, in the other five games, I think we're probably averaging giving up three or four shots a game. It's a pretty connected effort. It's our back line, and it's our defensive center midfielders, but it's also the front kids doing a ton of work up there making sure the ball never reaches the back line, so it's a collective team effort."

The Volunteers' goals came off a penalty kick by junior Claudia Dipasupil and an own goal. Junior goalkeeper Lindsey Romigrecorded her fifth clean sheet of the season, making one save on the night.

Tennessee dominated possession in the first half, getting off 18 shots and 10 corner kicks while holding the Panthers to one shot.

Dipasupil put away a penalty kick at the 28-minute mark after Abbey Burdette was fouled in the box. Dipasupil didn't give Hairston a chance at a save, placing it well out of reach in the top left corner.

UT continued to get chances in the second half, peppering the Panthers with 19 shots and taking six corner kicks.

Redshirt-sophomore Jaida Thomas had an excellent look in the 54th minute, getting her head on a cross at close range, but Hairston was there to make the save.

Dipasupil also got a quality shot off, blasting one from 25 yards out low and to the left in the 80th minute, forcing Hairston to make a diving save.

The final goal of the night came with just over a minute left in the match off a missed clearance from a Taylor Huff cross.

UP NEXT: Tennessee will be back in action on Sunday, facing Chattanooga on the road at 6 p.m. ET. The game will be streamed on ESPN+.

DIPASUPIL STEPPING UP: Junior Claudia Dipasupil scored her fourth goal of the season against HPU. With four goals and two assists, she currently leads the team in points with 10.

FIRST STARTS: Freshman Jordan Fusco and senior Hannah Zaluski each earned their first starts as Volunteers against High Point, suiting up in the midfield.

HOT START: UT's six wins to start the 2021 campaign is the most wins in a row at the outset of a season since the Big Orange started with nine straight wins in 2017.

BENCH CONTRIBUTING: With Dipasupil's goal against HPU, 10 of 22 UT goals on the season have been scored by players coming off the bench.
Last edited: Sep 5, 2021
S

Not our best effort, but we won anyway. Perhaps two matches in three days is a bit much. Dipasupil is having a really nice season and our version of the energizer bunny, Abbey Burdette, just keeps playing really well. I'm looking for a better performance vs Chattanooga. 6-0 still looks great!
Likes: kregman, youcancallmeAl, Rickster and 1 other person