…and unscored on so far….
Likes: StrangeVol, Rickster and mad4vols

COOKEVILLE, Tenn. – Six different Vols found the back of the net in Cookeville on Thursday as UT took a 6-0 win over the Golden Eagles to remain undefeated on the season.

Redshirt-sophomore Jaida Thomas opened the scoring, finding the back of the net from six yards out off an assist from Tara Katz at the 16-minute mark.

Eskin punched in her first goal of the season 28 minutes into the game off a pass from Thomas to put the score at 2-0.

Junior Claudia Dipasupil made it 3-0 four minutes later, getting a foot on a cross from senior Mackenzie George and redirecting it to the far post.

In the 38th minute, freshman Jordan Fusco found Schleifer in front of the goal to put UT up 4-0 at the half.

Senior Hannah Tillett put in the first goal of the second half at the 74-minute mark, knocking in a header off a cross by Schleifer.

Freshman Taylor Huff capped off the scoring with two minutes left in the game, beating a defender and driving one far post from just inside the 18-yard box.

UP NEXT: Tennessee returns home to host the Ragin' Cajuns on Sunday. Kickoff is set for 1 p.m and the game will be streamed on SECN+.

BALANCED ATTACK: With three different Vols scoring their first goals of the season against Tennessee Tech, eight UT players have now logged a goal this season.

DIPASUPIL DIALED IN: Junior Dipasupil entered the 2021 season with two career goals and has already surpassed it, moving her season total to three with her goal against TTU.
Likes: Putbacks, VOLINVONORE and StrangeVol 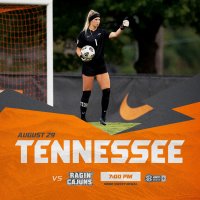 KNOXVILLE, Tenn. -- No. 17 Tennessee continues non-conference play on Sunday, hosting Louisiana at Regal Soccer Stadium. The game, originally scheduled for 1 p.m., will now be played at 7 p.m. ET, and the match will be streamed on SECN+.

The Volunteers enter the contest with a perfect 3-0 record on the season, having outscored opponents 14-0. The Ragin' Cajuns hold a record of 1-2, losing to Kentucky in their most recent outing, 5-0. Louisiana, who has made the semifinals of the Sun Belt Conference Championship for the last two seasons, was picked to finish fifth by the league's coaches in the 2021 preseason poll.

It will be the first matchup between the two programs. UT owns a 5-0 record against Sun Belt opponents while Louisiana is looking for its first win against an SEC school, holding an all-time record of 0-25.

BIG TIME BENCH PLAY: Through two games, Tennessee's bench accounts for seven of the team's 14 goals and nine of 15 assists.

LOCKDOWN DEFENSE: The Vols' back line has limited opposing teams to a combined 16 shots and three corner kicks over the last three games.

BALANCED ATTACK: With three different Vols scoring their first goals of the season against Tennessee Tech, eight UT players have now logged a goal this season.

UP NEXT: UT will play its second road match of the year, facing off with No. 15 USF. 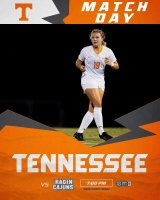 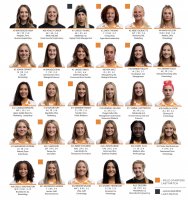 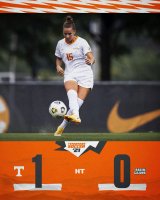 Still in the rain delay but here is the 4th goal

Another night of firsts -
⚽First goal of the season for Wrenne French
⚽First collegiate goal for Tara Katz
⚽First saves as a Vol for Ashley Gabor
Vols Shut Out Ragin' Cajuns, 4-0

Fifth-year senior Wrenne French scored her first goal of the season, and junior Tara Katz logged the first goal of her collegiate career. Senior goalkeeper Ashley Gabor made her first start as a Volunteer, tallying two saves on the day.

French scored UT's lone goal of the first half just after the nine-minute mark, heading the ball near post off a corner served by senior Hannah Tillett.

The Vols wasted no time adding to their tally in the second half, with Katz carving through the Ragin' Cajun defense to put the Big Orange up 2-0 just over a minute into play.

Freshman Taylor Huff ran onto a serve from sophomore Maddie Eskin to score her fourth goal of the season at the 62-minute mark, sliding a shot past the Louisiana keeper and into the corner.

A long ball from freshman Claire Rain set redshirt-junior Brooke Wilson up for her second goal of the season 14 minutes later, putting UT up 4-0.

A lightning delay with just over 12 minutes left to play created a break in the contest, but no additional goals were scored once play resumed.

UP NEXT: Tennessee will continue non-conference play, heading to Tampa on Thursday for their first matchup against a ranked opponent this season in No. 15 USF. Kickoff is set for 7 p.m. and will be streamed on ESPN+.

BALANCED ATTACK: With Wrenne French and Tara Katz each finding the back of the net against Louisiana, 10 different Vols have scored at least one goal this season.

STARTING STRONG: For the first time in program history, Tennessee has opened the season with four straight shutouts.
Likes: Bret178, Rickster and StrangeVol

Really pleased to see TARA get that goal...her first I think. So much was expected from her when she was recruited. Maybe this will turn the lightbulb on for her! Hope so!
Likes: mad4vols 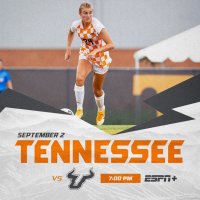 KNOXVILLE, Tenn. -- No. 22 Tennessee will play its first ranked opponent of the 2021 campaign in Tampa on Thursday, squaring off with a USF team that is receiving votes in the United Soccer Coaches Poll and is ranked No. 23 by Top Drawer Soccer. Game time is set for 7 p.m. ET, and it will be streamed on ESPN+.

UT enters the match having opened the season with four straight shutouts for the first time in program history. The Big Orange currently ranks third in the nation in goals scored with 18, and 10 different players have found the back of the net already this season.

It is the first meeting between the two programs. The Vols hold a 6-3-0 record all-time against ACC opponents.

USF enters the game with a 3-1 record, having already faced three SEC opponents. The Bulls beat both Florida and Kentucky, 2-1, and fell to LSU, 1-2. USF was picked to finish first in the AAC by the league's coaches in the 2021 preseason poll, having captured its fourth consecutive conference championships in 2020 with both the regular season and tournament titles.

UP NEXT: Tennessee returns home to host High Point at 6:30 p.m. on Sunday. The game will be streamed on SECN+.
FRESHMEN STARTING HOT: Freshmen Taylor Huff, Jordan Fusco and Emmy Schleifer have combined for seven goals through four games.

HUFF CLIMBING CHARTS: With four goals on the season, Taylor Huff currently leads the team in goals scored. That figure ranks first among freshmen in the SEC and 22nd in the nation among all players.

MAY WE ASSIST YOU: UT's 18 assists ties Clemson at third among Division I programs. 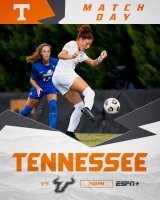 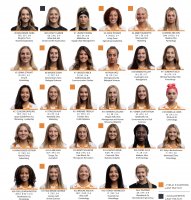 USF has already won matches this year against Florida and Kentucky so this should be a good test on the road. I was tempted to go see the match tonight since I live in Tampa Bay but I can’t miss the football season opener.
Likes: FabSmokyVol and StrangeVol
S

This should be a very good early season match. Afterward we'll have a much better idea of how good we are. On the road, I think this match is a toss up.
Likes: mad4vols
New posts
You must log in or register to reply here.
<< Tennessee Lady Vols Forum
Share: Facebook Twitter Email Link