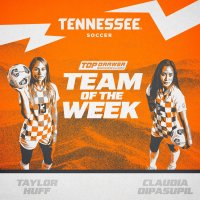 Seems like folks in the know are starting to notice our young ladies and what a solid team they are!
Likes: volfan__18, Lurker, kregman and 2 others 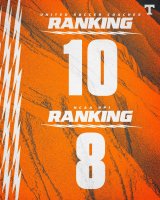 Likes: volfan__18, Putbacks, StrangeVol and 2 others

Friday’s kickoff time is set for 7 p.m. and gates will open at 5:30. Food trucks will be on site, as well as a Mississippi State-painted smash car in the parking lot. Smokey X will be there to take pictures and the first 500 fans will get checkerboard shirts.
Likes: StrangeVol

Looking for our sixth straight SEC win & 3,000+ fans in the stands!
MATCH CENTRAL: No. 10 UT vs. Mississippi State

KNOXVILLE, Tenn. – No. 10 Tennessee is hosting Mississippi State on Friday in a 7 p.m. matchup that will be streamed by SECN+.

The Vols are attempting to break the Regal Soccer Stadium attendance record during the match, and promotions include free checkerboard jersey t-shirts for the first 500 fans, food trucks inside the stadium, a Mississippi State smash car and photos with Smokey X. The current attendance record of 3,042 was set in 2001 when No. 18 UT hosted No. 1 UNC.

Tennessee is 12-1-0 on the season and in the midst of its longest SEC winning streak since 2007, having won five straight conference games. In its most recent outing, UT defeated No. 19 South Carolina on the road, 1-0. The win snapped USC's home unbeaten streak in conference play dating back to 2018.

Mississippi State enters the match on the heels of a 1-0 loss at Alabama. The Bulldogs have a 3-6-3 record on the season and a 1-4-1 mark in conference play.

UP NEXT: Tennessee will travel to Vanderbilt on Thursday for an 8 p.m. ET matchup that will be streamed by SECN+.

AROUND THE LEAGUE: Tennessee has allowed the fewest goals in the SEC (6), has recorded the most shutouts (9), and has the best overall win percentage (.920).

PROTECTING THE NET: The Vols have recorded nine shutouts this season, the most since 2018 when they managed a program-best-tying 12. Through 13 games, the back line has limited opponents to a combined 6 goals and 49 shots on goal. UT ranks fourth in the nation in goals-against average at .455.

STACKING UP: This is the fastest any UT team has made it to 12 wins, and five straight SEC wins is the longest streak since 2007 when the team strung six together. The program-best SEC win streak of eight was set in 2004.

EVERYONE IS DANGEROUS: Thirteen different Vols have scored at least one goal this season, and 13 of UT's 36 goals have been scored by players coming off the bench.

SECOND HALF TEAM: Tennessee is outscoring opponents 24-3 after halftime, has scored eight goals during the final 10 minutes of regulation and has landed two golden goals this season.

DIPASUPIL TAKES THE LEAD: With a goal and two assists last week, Dipasupil took the lead in total points with 18.
Likes: 3rdDegreeVol, StrangeVol, Vols4life and 3 others

It's a beautiful day to beat the Bulldogs & break an attendance record!
🔘Checkerboard T-shirts
🔘Smokey X
🔘Food Trucks
🔘Smash Car
7PM🔜LET'S DO THIS! 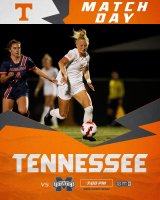 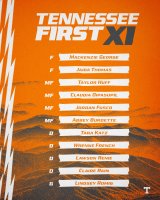 Really wish there was more of the crowd noise in the actual broadcast. I think it would add to the game to be able to listen in.
Likes: mad4vols
K

Not our best half but not bad would like to get up by more than one goal. We are having trouble clearing the ball from our box.
Likes: mad4vols 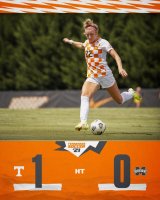 Diapasul with the goal. I was following the ball thinking it was heading out then bam goal.
Likes: Rickster and mad4vols
K

Bad goal keeping she has to come get that ball even though the d failed badly.
Likes: mad4vols
K

D needs to pick it up.
Likes: mad4vols and Volstylexx

State is so quick on their counters, and our back line is looking very vulnerable all night.
Likes: mad4vols and kregman
K

Their goalie can really hammer the ball creating some of these run outs.
Likes: Volstylexx and mad4vols