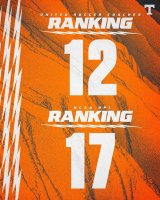 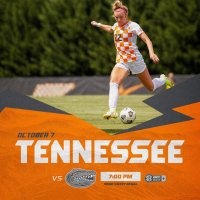 KNOXVILLE, Tenn. -- No. 12 Tennessee is back in action at Regal Soccer Stadium on Thursday, hosting the Gators in a 7 p.m. ET match that will be streamed on SECN+.

Florida (3-6-3, 2-1-1 SEC) is in its first year with head coach Tony Amato at the helm and was picked to finish tenth in the SEC by the league's coaches in the 2021 preseason poll. The Gators lost to Ole Miss in their last match, 1-0.

UF holds an 11-18-3 advantage in the all-time series, but UT has logged three straight wins over the Gators since 2018. A win on Thursday would mark the longest win streak Tennessee has ever posted against Florida.

The game is UT's annual Breast Cancer Awareness Month match, and the team will be donning pink jerseys for the night. Additionally, the first 500 fans will receive Tennessee scarves.

UP NEXT: The Vols will face No. 19 South Carolina on the road Sunday, kicking off at 2 p.m. ET in a contest that will be broadcast by ESPNU.

BY THE NUMBERS: Tennessee has allowed the fewest goals in the SEC (6), has recorded the most shutouts (7), and has the best overall win percentage (.909).

PROTECTING THE NET: Before giving up a goal at Arkansas, UT's defense tallied 633 scoreless minutes. Through 11 games, the back line has limited opponents to a combined 6 goals, 42 shots on goal and 20 corner kicks.

HAPPY TO ASSIST: Mackenzie George has logged assists in five straight games, racking up a team-high seven on the season.

SECOND HALF TEAM: Tennessee is outscoring opponents 22-3 after halftime, has scored seven goals during the final 10 minutes of regulation and has landed two golden goals this season.

AGGRESSIVE OFFENSIVELY: UT is second in the nation in corner kicks per game (9.0), fifth in total shots per game (22.27), and is seventh in shots on goal per game (10.55). With 33 goals on the season, the Vols are tied for ninth in the nation in scoring offense at 3.00 goals per game.

FINDING THE NET: Through 11 games, UT has scored 33 goals, surpassing the total number of goals scored by Tennessee over 15 games during the 2020-21 season (30).

EVERYONE IS DANGEROUS: Thirteen different Vols have scored at least one goal this season, and 13 of UT's 33 goals have been scored by players coming off the bench.
Likes: Volfaninfl2 and StrangeVol 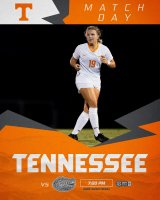 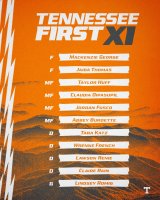 It’s a monsoon but they are getting ready to start. Soccer players are not wimps.
Likes: Volfaninfl2 and mad4vols

interesting how they went with a pink orange combo instead of an all pink uni.
K

mad4vols said:
interesting how they went with a pink orange combo instead of an all pink uni.
Click to expand...
Know why we do it but not a pretty look.
Likes: mad4vols

Was that not a hand ball a minute ago?
K

Should be up more but we kept the pressure on til we subbed pretty heavy before half. I believe it is Ellis who they sub in for George and she is just not good at this point.
Likes: mad4vols 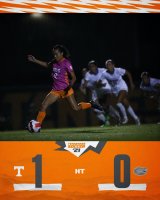 Good win. Starters got a lot of rest and no one seemed to get injured so all positive and backups got time. We are awesome at getting corners but inept at scoring on them. Renie could help if she could get the ball down a little more.
Likes: StrangeVol and mad4vols

Make that 4⃣ SEC wins in a row! 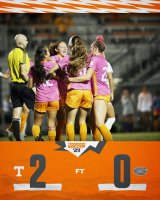 Likes: volfan__18, StrangeVol, Putbacks and 4 others

Thought we were going to get a third goal on that header near the end.
Likes: volfan__18, StrangeVol, kregman and 1 other person

The victory extended UT's win streak over the Gators to four, dating back to 2018, which is the longest stretch in program history.

Junior Claudia Dipasupil and freshman Jordan Fusco found the net for Tennessee (11-1-0, 4-1 SEC). In goal, junior Lindsey Romig made three saves to record her seventh clean sheet of the season. The Vols were dominant offensively, maintaining possession for 64 percent of the game, outshooting the Gators 25-6, and taking 14 corner kicks while limiting UF to two.

Shaye Seyffart had the best chances for Florida (3-7-3, 2-2-1 SEC), getting off four shots, two of which were on frame. UF keeper Alexa Goldberg came up with six saves on the day.

"This (win) was big. Obviously, all the points you can get are important overall in the league and then within the SEC East. It's the first time we've beaten Florida four times in a row, so it's a big achievement for all the kids in that locker room," said Tennessee head coach Brian Pensky.

"I think our confidence just continues to grow with each game. Tonight was the first night in SEC play where we scored first, so that's kind of a big deal. In our first three SEC wins we had to come from behind. It's also our first SEC shutout. Hopefully those two things can build our confidence going into a very difficult place to play (at No. 19 South Carolina) against a very, very good team on Sunday."

The match against Florida was UT's annual Pink Night in recognition of Breast Cancer Awareness month, and the team donned pink uniforms for the occasion. Kickoff was slated for 7 p.m. ET but was delayed to 7:30 p.m. due to inclement weather. There were periods of driving rain throughout the match.

Tennessee outshot the Gators 14-3 in the first half, with Dipasupil putting one in the side net on a penalty kick at the 20-minute mark to give the Vols a 1-0 lead at the half. Freshman Taylor Huff drew the foul that led to the penalty.

Fusco found the goal six and a half minutes into the second half, one-touching a pass from Jaida Thomas into the top right corner of the net from 15 yards out.

Taylor Baksay got a shot on frame in the 81st minute for the Gators, but Romig was there to make the save, securing the shutout for UT.

UP NEXT: Tennessee travels to Columbia on Sunday for a 2 p.m. matchup with No. 19 South Carolina. The game will be televised on ESPNU.

DIPASUPIL TAKES THE LEAD: With a goal and an assist against Florida, junior Claudia Dipasupil took the lead in total points with 17. She has six goals and five assists on the season.

TRIPLE THREAT: Taylor Huff, Jaida Thomas, and Claudia Dipasupil are in a three-way tie for most goals scored, each with six.

SECOND HALF TEAM: Tennessee has outscored opponents 23-3 after halftime, has scored seven goals during the final 10 minutes of regulation and has landed two golden goals this season.
Likes: 3rdDegreeVol, volfan__18 and StrangeVol
S

Ho-Hum...another gator hide to nail to the wall. I do so love to skin the gators in anything! Way to go Ladies!!!

Props to our grounds crew...the field held up really well in that downpour. Great job gang.

Love that little Claudia is tied for the team lead in goals. When she gets squared up she rarely misses. Man we have a LOT of talent on this team. The really good news that our talent is spread pretty evenly from Freshmen to Seniors.

If we keep dominating on offense and our back line continues their stellar play, this could be a really special season!
Likes: volfan__18, Volfaninfl2, Putbacks and 4 others

We're back at home on Friday & it's going to be a BIG one - T-shirts, Smokey & Food Trucks! 🍔🐶🚗
Come out & help us break the Regal Stadium attendance record!

Bunny Shaw does it again, they are loving her in Manchester.