sccshortstop said:
Where you at Strange?
Click to expand...
Was thinking the same thing when I discovered that the season starts tomorrow.
Where is our Lady Vols soccer guru?
Miss the insights.
Have no clue what to expect from this years squad, who are some of the stand out players?
We need you @StrangeVol.
Likes: sccshortstop
S

Hi guys. I just woke from a long summer nap to find that there is interest in soccer on this board, so I'll fire up my keyboard and get something together for tomorrow. This has been a really strange run-up to the season with little to no info (other than the chart that mad4vols posted) available and a whole lot of questions that need answers. I'll do what I can but don't expect a whole lot.
Likes: LadyVols_WBK, HeadVol77, NochNoch and 1 other person

Thought you had changed your handle EstrangedVol! Welcome back. The spotlight is on.
Likes: Bret178, sccshortstop and StrangeVol

Was surprised to see that #7 Vanderbilt who upset us in the SEC tournament won the title.
Pretty impressive considering they had to get by the #1, #2 and #3 seeds.
Hats off to the Commodores.

Vanderbilt definitely looked like the most superior team in the tournament. They have some awesome players. Just took them a while to get going game wise this season. And no, I am not a Vandy fan. I am all Big Orange.
Likes: mad4vols

Lady Vols in the Pros
Michelle Alozie • F, Houston Dash (NWSL) • Years at Tennessee: 2019
After beginning her pro career a year ago with Kazakhstani front-runner BIIK Kazygurt, Alozie is set to join the Houston Dash of the NWSL next week for preseason competition. In her lone season at Tennessee as a grad transfer in 2019, the forward from Apple Valley, California, scored three goals in 17 appearances for the Big Orange.

Carlyn Baldwin • M, Sporting CP (Portugal) • Years at Tennessee: 2014-16
In her fourth season with traditional Portuguese power Sporting CP, Baldwin battled back from injury and returned to the pitch for her club on October 10, 2020. Averaging 20.5 minutes per game this season, the former Vol has made eight appearances and scored one goal during the 2020-21 campaign.

Maya Neal • D, Le Havre AC (France) • Years at Tennessee: 2015-19
A four-time All-SEC defender for the Vols, Neal made her professional debut for Le Havre AC in France on November 14, 2020 against her former college teammate Bunny Shaw, subbing on against Bordeaux in the 87th minute. The Naperville, Illinois, native has made three appearances on the back line for HAC so far this season.

Sonia Ouchene Salón • M, Stade de Reims (France) • Years at Tennessee: 2019
Following her freshman season on Rocky Top in 2019, Ouchene returned to Europe to begin her professional career with top-flight French club Stade de Reims. The 20-year-old midfielder from Paterna, Valencia, Spain, has made 13 appearances with 10 starts this season. Her best performance came against Issy FF on October 3, 2020, when Ouchene scored a hat trick in a 7-1 victory for her club.

Bunny Shaw • F/M, FC Girondins de Bordeaux (France) • Years at Tennessee: 2017-18
The 2018 SEC Offensive Player of the Year has not missed a beat at the next level, scoring 15 goals in her last nine matches for Bordeaux. Just past the midway point of the 2020-21 season, the Jamaican international has her club firmly in third place as the FCGB women vie for a qualifying spot in the UEFA Women's Champions League.

In her most recent outing, Shaw recorded her third hat trick of the season with three goals in a 7-1 win over Stade de Reims. The six-goal victory was the largest league win for Bordeaux in club history.

MA Vignola • D/F, Valur Reykjavík (Iceland) • Years at Tennessee: 2016-19
Vignola is another former Vol joining a new club for the 2021 season. She signed with Valur Reykjavík in Iceland last month following a successful rookie campaign with crosstown rival Thróttur Reykjavík. The striker from Cincinnati, Ohio, made 12 starts for Thróttur in 2020, scoring four goals in her final three matches with the club before the Úrvalsdeild cancelled the remainder of the season in early October.

Hannah Wilkinson • F, MSV Duisburg (Germany) • Years at Tennessee: 2012-16
Now in her fifth season as a professional soccer player, Wilkinson recently announced that she has signed with MSV Duisburg of the German Frauen Bundesliga. The New Zealander and three-time World Cup participant spent the 2020 campaign with Djurgårdens IF in Sweden, making 17 appearances for the club last year.

Shae Yanez • GK, London City Lionesses (England) • Years at Tennessee: 2015-18
Tennessee's all-time career leader in save percentage has found her stride across the pond, as Yanez has gone 450-plus minutes in the FA Women's Championship without conceding a goal for her London City Lionesses. She has played and started in all 14 matches for the club during the 2020-21 season, logging 1,260 minutes and a 0.79 goals-against average.
Likes: Rickster, scores4fun, HeadVol77 and 2 others

Today’s match will be broadcast on SEC Network+ @ 4pm 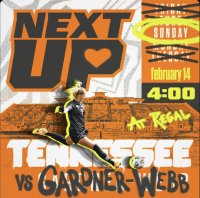 All 6 goals from Tennessee’s big win.

Remember this name, she is just a freshman

mad4vols said:
Remember this name, she is just a freshman

View attachment 352027
Click to expand...
Already knew her name because she played lights out back in the fall! Got a motor along with talent!
Likes: mad4vols

So what do you think...are we that good or has our competition been that bad?
Likes: mad4vols
S

So what do you think...are we that good or has our competition been that bad?
Click to expand...
Not mad who i respect but i think maybe a little of both. competition not great but you still have to kick it in the net. I would love to hear your thoughts on it as well!
Likes: mad4vols
S

Given that I haven't seen either match this second half of the season, it sure looks like we have discovered some firepower during the break ! Our match next Sunday versus Xavier will show us if this was fools gold or not. Xavier is consistently good year to year.
Likes: mad4vols and sccshortstop 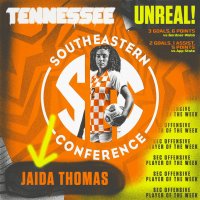 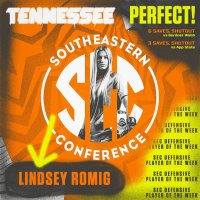 So what do you think...are we that good or has our competition been that bad?
Click to expand...
I’m leaning more towards the competition being bad.
Likes: sccshortstop 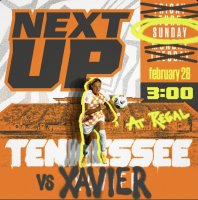