VA_VOLFAN said:
Great inside footage and even given us some practice and lifting vids! The freshman are looking like sophomores and they are transforming into the college athletic body. So exciting to see and looking forward to a great season 😊
Click to expand...
Did I see that TK has cut her nails?
Likes: chuckiepoo

youcancallmeAl said:
Did I see that TK has cut her nails?
Click to expand...
She said she was getting them done over the weekend lol..
Likes: chuckiepoo, dapeak and youcancallmeAl
V

youcancallmeAl said:
Did I see that TK has cut her nails?
Click to expand...
Haha i believe she was about to get them done 😂
Likes: dapeak and youcancallmeAl
D

May be arriving late she was there before but your right shes not in the photo . Her social media's all still have LV info so i dont think its anything major .
Likes: chuckiepoo and dapeak
R

Click to expand...
She’s in this TikTok on the team page
Lady Vol Basketball on TikTok
Likes: TnScooby, Volfaninfl2, mcannon1 and 1 other person
D

Tess and Zack have a new gig.
Likes: chuckiepoo, ATLVOLFAN01, LVsinceJV and 1 other person
X

From the Cavinder twins to Kendric Davis, the transfers who should cash in big in college basketball

xtpsrh08123 said:
From the Cavinder twins to Kendric Davis, the transfers who should cash in big in college basketball

“This is not a ranking -- rather, a group of transfers who could be athletes, students and entrepreneurs this season.”
L

Did anyone read the interview with CP3 in USA Today? Paywall,
So I can’t read it. But I do know the interviewer asked her if she would let her daughter play at Tennessee. Candace “winced” and implied that maybe not since reproductive rights in TN have been severely restricted.
Likes: 1reVOLver
R

LadyOrange said:
Did anyone read the interview with CP3 in USA Today? Paywall,
So I can’t read it. But I do know the interviewer asked her if she would let her daughter play at Tennessee. Candace “winced” and implied that maybe not since reproductive rights in TN have been severely restricted.
Click to expand...
The same could be said about most of the schools in this country right now, especially the SEC
Likes: chuckiepoo, LV renaissance, dapeak and 1 other person
R

River67 said:
Marta looks amazing 🤩 View attachment 490063
Click to expand...
Marta looks like she’s ready to do some damage on the court
Likes: chuckiepoo, LadyVol1908, ATLVOLFAN01 and 1 other person 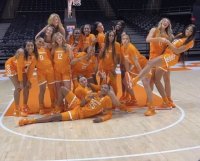 Kellie Harper may have the hardest job in women basketball, who are you going to play?
Likes: chuckiepoo and Memvol44
H

I think at least 10 will play; the real question is who doesn't get to play?
Likes: chuckiepoo
L

youcancallmeAl said:
Did I see that TK has cut her nails?
Click to expand...
LOL! I was like you, hoping the light bulb had finally come on. But ... siiiiigh ... still not ready to be a serious baller. And OF COURSE, that's perfectly fine and dandy and even, for probably most, admirable. But for this old jock, I cannot even for one hot second believe that someone so dedicated to having super long and professionally maintained nails that are the envy of her peers is somehow not going to think about those expensive-ass nails while playing basketball in them. There is simply NO WAY that having long nails that one is super proud to have spent money on does not affect the way a person plays basketball. NO. FREAKING. WAY. As an aside, I feel strongly that long nails are potentially dangerous in the sport. As someone who has been poked in the eye during a basketball game I can tell you that it was excruciatingly painful -- and the poke was from a finger with short nails, so, essentially, I got poked with the skin at the end of a finger. What if it had been a half-inch-long painted fingernail that actually could have sliced my cornea? Or even punctured my eye?

I actually thought long fingernails weren't allowed in NCAA basketball for that reason, but apparently I am wrong to think that. It SHOULD be against the rules, IMO.
Last edited: Sep 15, 2022
Likes: chuckiepoo, Putbacks, youcancallmeAl and 2 others

Everyone will play untill game gets tougher then 10 players for sure.

Hexad Vol said:
I think at least 10 will play; the real question is who doesn't get to play?
Click to expand...
I think where the big situation comes in for players and playing time is at the three and four where we have Jackson, Suarez, Pissott, Puckett, Striplin, Darby and Franklin and possibly even Horston even though I expect her to play a lot at the two. That is seven players vying for time at two positions. I think I feel fairly confident that it will be Key and Hollingshead at the five and Powell, Miles, and maybe some Walker at the point. I think we may see Walker moving to the two where she will be in competition with Wynn and Horston more than likely.

All the girls that were already here look physically fit and much improved over their last season. If Franklin is totally recovered from her ACL going to be hard to keep her out of the lineup. Jackson, Horston, Powell, and Key are givens and Puckett seems to be the sixth man with Walker possibly starting at the two just because she is experienced and a starter last season. Miles is going to backup the point and Hollingshead the five so there are nine players. Suarez, Striplin, Darby, Wynn, and Pissott seem to be the five on the outside that will be vying for any additional minutes. That is just the way it looks right now we could have some surprises for sure. Whomever ends up on the bench will be purely because of numbers at certain positions because all these girls have developed into confident and excellent basketball players going into this next season.

The ability to have the depth to exhaust and fatigue most teams seems evident to me. This is the most quality depth I've seen on a Tennessee team in years.
Likes: Volfaninfl2, travis929, chuckiepoo and 4 others
L

River67 said:
Marta looks amazing 🤩 View attachment 490063
Click to expand...
It's shocking sometimes just how much a young person can mature physically (and, with some luck, mentally) after only a couple of years in college. Marta looks ready to beat defenders down the floor for lots of layups this season!
Likes: chuckiepoo, LadyVol1908 and ATLVOLFAN01