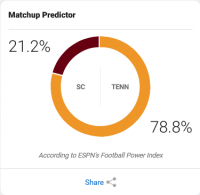 Tennessee returns to Knoxville following a historic crushing of Missouri in Columbia last weekend. The Vols offense has seldom appeared more dominant and they had little trouble dispatching the Tigers in emphatic fashion, giving several starters a short day of work as the back-ups got plenty of run. This week, we go from Tigers to Chickens as first year coach Shane Beamer brings his squad to square up against the Vols.

1. Expose the D: South Carolina has a solid defense that you would expect from a Will Muschamp assembled team... at least on paper. Georgia is obviously a powerhouse this year and they dropped 41 point on them, which is their scoring average. Their other games have been against Kentucky, EIU, ECU and Troy. ECU is highest in scoring offense at 52nd nationally... Kentucky at 78, Troy 96 and what the heck is an EIU? I think South Carolina gets the benefit of being good on paper but will be exposed in reality.

2. Turnover Margin: South Carolina does have a ball hunting defense that is 4th in the nation, creating 14 turnovers, with 9 INT's and 5 fumble recoveries. Hendon Hooker will need to continue his trend of taking care of the football and be sharp in the passing game to avoid turning the ball over to a decent SC secondary.

3. Play it Again: SC is 72nd in the nation in rushing defense and the Vols just rushed for over 450 yards at Mizzou. Do the thing.

4. Score over 30: Which came first, the chicken or the egg? Three USCe opponents are within the top 12 of total defense nationally. Is that because they played South Carolina, or is South Carolina's offense limited by those defenses? Look for USC to score a bit above their average which means the Vols will need to be around 30+ on the day.

South Carolina is back to having a scholarship QB playing football for them and not a GA, which is cool, I guess. GA Zeb Noland actually has a higher QBR than former highly rated recruit Luke Doty. Ultimately, I think the USCe offense is better than they have been but the Tennessee offense overwhelms them as the Vols stack drive upon drive.

A little closer than we would like. We don’t execute as cleanly as last week and their offense scores a bit more than we want.
Likes: drvenner, almirUT and b_gann

I think Tennessee has a good shot at winning but I'm putting money on that spread... It's way too high lol
Likes: b_gann

A little closer than we would like. We don’t execute as cleanly as last week and their offense scores a bit more than we want.
Click to expand...
I think there is a good chance this could be like you say, just with some things going the wrong way and us over reacting to a perfect performance last week, as though that is the new expectation... but I said what I said.
Last edited: Oct 6, 2021
Likes: SweetasSoda, hooter vol, ionaVOL and 1 other person

Toss conventional Vol performance observations in the can. New era with innovative O and D led by highly competent coaches and now a real QB. Will still be bumps in the road, but when you can run the rock and stop the run - good things happen. It opens the pass game for the O when they bring more guys into the box and it forces the opponent into being one dimensional passing the ball when you can stop it in your base D.

That's what we have seen already. I don't see any let up in performance. The foot will be on the accelerator.

SC is OK at running the ball, but we are good at stopping the run. So that means more stops on D. Giving the ball to this O more means more scoring - period.

Vols by 20+ for 2 weeks in a row, even with Nick trying to jinx our performance.
Likes: VOLSONLY

Catbone said:
I think Tennessee has a good shot at winning but I'm putting money on that spread... It's way too high lol
Click to expand...
Same... SC has covered often this year.

Catbone said:
I think Tennessee has a good shot at winning but I'm putting money on that spread... It's way too high lol
Click to expand...
What’s the spread?

OGbabyaviVol said:
Vols by 20+ for 2 weeks in a row, even with Nick trying to jinx our performance.
Click to expand...
Easy there, horse boy
Likes: VOLSONLY, ShargioVol, InVOLuntary and 2 others

SpringBokVol said:
10.5
Click to expand...
I don’t see any way we don’t win this game by at least 14 but what do I know
Likes: SpringBokVol

Waited for the jerseys to drop to put in my prediction. I’m now at 42-10 Vols.
Likes: nicksjuzunk, Brillovol, MarcoVol and 6 others

KPT_VFL said:
Waited for the jerseys to drop to put in my prediction. I’m now at 42-10 Vols.
Click to expand...

Does ut skull drag us or
They seem optimistic. LOL
Likes: IhateGA, nicksjuzunk, TheBigOne10 and 5 others

Only thing I'm worried about is our ability to sustain drives against a solid defense.

But their D isn't that good, their offense is around as bad as Bowling Green's and we have all the momentum in the world.