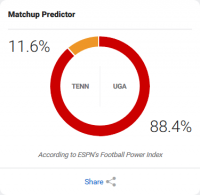 Tennessee heads down I-75 this week, winners of 8 in a row to test their mettle against the Georgia Bulldogs. On paper, Georgia has more talent, having brought in some of the best classes in the nation over the previous few seasons. The good news is that Tennessee is closing that gap. The Vols are not yet at that level, but every year, they add more and more pieces and are finally more than just schedule fodder for the Bulldogs.

1. Turnover Margin: Tennessee is going to need some breaks. So far this season, they are +3 in turnovers, giving the ball up 0 times. Georgia has 4 takeaways with 2 turnovers lost. The Vols need to be on the right side of this margin at the end of the game. JG has done a good job taking care of the football, especially the last game, although he almost had a horrible mistake when he was getting hit. He needs to make the right decisions all night long and not become the next mark on safety Richard LeCounte III's hit list.

2. Outrush UGA: I'm not sure when the last time Tennessee outran Georgia... maybe with Dobbs... but it's not been very often over the past decade. Zamir White is a great RB but he is not at that level (yet) that they have been churning out in recent years (Gurley, Chubb, Swift, etc.) And for the first time since Jalen Hurd, the Vols have some dudes who can peel off yards themselves. Both teams feature massive and talented Offensive Lines that can clear the way for their RBs.

3. Clean up the Defense: While Tennessee improved on defense last week, there were still too many breakdowns in the secondary, with Alontae getting burned badly while trying to jam a receiver and another WR dropping a wide open pass in the middle of the field that should have scored. Georgia will not make these mistakes. If Tennessee can't get this dialed in, they will be made to pay. George Pickens is the best WR outside of Bama the Vols will see all year and they are going to have their hands full with him. I expect UGA to try to fully exploit the short range passing game with plenty of slants and begin taking shots downfield if we begin to sit on the routes. Vol fans need to hope Shawn Shamburger is not only available, but rust free because we will need his edge. Aside from that, the Vols have relied on a pretty vanilla defense so far this year so it will be interesting to see if we have anything dialed up for Stetson Bennett or if we are content to let him try to make the throws. He can be slippery to get hold of and is a wee little thing, but he has been efficient with the ball and hasn't made a lot of mistakes. I'd love to see our DL get in his face and see Pruitt bring DB blitzes off of the edge.

4. Surprise, Surprise?: This is the type of game where Pruitt is likely to take a chance or two with an unexpected onside kick, fake punt or some tomfoolery with a TE. He's been talking a big game about not playing and coaching with fear. This is a great chance to steal an edge when the opponent is not expecting it.

Prediction: Contractually, Tennessee must lose this game, playing in the 3:30 CBS time slot. I'm already stressed just thinking about the theme music. Expect UGA to have the most 20% full stadium you've ever seen. I think it's a solid game, but it's too early for the Vols to win this one. It's not out of the realm of possibility, but I just can't get myself into the realm of PROBABILITY, and that's where I try to get my predictions to land.

My heart wants to pick my vols but my head just says no. I’m ready for Pruitt to prove me wrong on Saturday
Likes: SmokinBob, 1Volnation, blouder1 and 10 others

I'm not saying we are going to win, but the FPI seems way off to may. I would put it more like a 25%-30% chance we win the game.
Likes: Proud Army Wife, berryvol, TurnoverTrashCan and 3 others

You put a lot of work in to these so I would love to give it a like, but you picked the puppies. You gotta be more of a homer to earn a like fTom me. 28-24 good guys. Go Vols!!!
Likes: SmokinBob, BennesseeVols, Kristy* and 8 others
I

Thanks, Nick. This obviously will be a very tough game. With the line being 14 that should be easy money. I expect it to settle at around 12 points. I'm not sure yet what my pick will be. Gonna a ponder on it for a couple of days.
Likes: SmokinBob, berryvol, nicksjuzunk and 1 other person

When we win this game Saturday we will become the new school of choice for many five-star recruits!
Likes: preacherwebb, TN-POSSUM, MikeTheVol and 13 others

Good job @nicksjuzunk, Im with you on this one even though I hope we’re both wrong here. But I think we loose this one 33-20. Secondary and QB positions are still questionable jmo
Likes: Devo182 and nicksjuzunk
B

I think Pruitt has something up his sleeve for UGA this week and he is the ultimate motivator if it’s one thing I know it’s that the vols will be ready to play... dogfight in this one Tn 27 UGA 20
Likes: TN-POSSUM, Volfan1000, ScornedPapaVol and 10 others

This is a measuring stick game. How far have we come? I'm excited to see how our O-line matches up with their defensive front. That should be strength vs strength, and I'm looking forward to seeing how we do. I think we're closing the gap, but top to bottom, UGA still has a pretty significant talent advantage. I think we'll scare them but come up short.

VAWLS 🍊 gonna stun the pups and get the attention of the whole college football world!
Likes: ValleyAlVol, 2GeeZ4VolZ, VolSoldier4lyfe and 6 others 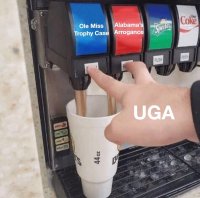 Dawgs overrated due to a strong first half against an overrated Auburn team. Add in the deficiencies of Mahlzahn's glorified HS RPO offense that Smart knew how to defense well.

Exclusive of turnovers deciding - Vols pound the ball, Dawgs pound the ball. So its JG versus SB. I cannot see a team with Trey, Cade, Eric, Henry, and Bryce losing to a team led by a QB with the name of Stetson. The defense plays well enough to get stops that lead to...

It’s Sunday. I think UGA has the potential to beat us by double digits. By Wednesday I’ll be the soyouresayingtheresachance.gif. By Friday I’ll have myself convinced WGWTFA. By Saturday I’ll be pins and needles.
Likes: Bret178, Proud Army Wife, nesbuddha66 and 19 others
2

Keep saying Auburn’s performance had more to do with yesterday’s game than UGA did...
Likes: Pacer92, 5FingerVolPunch, UTProf and 8 others

Just get a win.

Sticking to my guns from yesterday...

Vols win 27-17, and make a huge statement that TENNESSEE IS BACK!!
Likes: SweetAsSodaPop, BennesseeVols, VOLFan65 and 18 others

It's a good on good matchup with our o line vs their defective front.

For us to win jg has to find different level and be special.

Our defense against their offense... Who knows...I think they have potential stars with guys like white and Pickens. We have Taylor and Thompson and ht....I think both sides on this matchup win/lose some... Turnovers and big plays will determine the winner.

TN D steps up and slows down UGA's run game and makes their qb beat us. Our Oline opens enough holes to get our run game going.
VOLS 24-17
Likes: preacherwebb, VolSoldier4lyfe, franklinpence and 1 other person