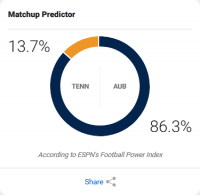 I'm very limited in my time this week which is why the thread is up so late. Not much analysis from me. Just copy and paste from the A&M thread for the most part.

1. Offensive Rhythm: The Vols continue to struggle offensively, having run down Arkansas' throat in the first half before completely falling apart in the second half. JG played fine before he was injured. Brian Maurer was awful. Harrison Bailey didn't do much wrong but got very little leash. If the Vols don't trust their QB, there is no chance at a victory. If Harrison Bailey gets the start here, he will have a lot of pressure dialed up from Kevin Steele. Chaney will need to account for this and get the ball out of his hand quickly, especially to build confidence in the young QB. Receivers will need separation right off the ball.

2. Pass Defense: Bo Nix is hit or miss. We need him to have an off day. If Pruitt dials up pressure like we did at the end of the Arkansas game we may force him into bad decisions. Tennessee still cannot defend the middle of the field, in spite of all logic.

3. Coach to Win: There was a time when Tennessee would gamble, go for it on 4th down, throw in a trick play and have a random onside kick. The Coach was Jeremy Pruitt. Now, we seem to go through basic motions whether they are working or not, as if it was a script that could not be altered. The coaches need to play to win, not play for the sake of playing, and they need to call the game that way.

4. Know Thy Enemy: Pruitt knows this offense extremely well and last time we played Auburn, he called a beautiful game that resulted in the victory. Tennessee has major upset potential tomorrow night.

I think the Vols can win this. I'm not sure they will. Harrison Bailey and the freshmen finally get some playing time. There are flashes of hope, but growing pains.

i think we win. it's ugly. it's stressful. it doesn't necessarily cure all ills with an irrate fanbase that want's it's coach's head on a stake. but we find a way.

Freeze to The Hill

I'm going with my standard prediction....

Vols: Not very many
Auburn: a bunch
Likes: VOLSONLY

Diamond in the ruff

Screw it. Quit moaning and whining for a little while. Praise God we are still playing during this Insanity.
Bo Nix wets the bed. Chaney and Pruitt get their egotistical butts on the same page. Players play and lose the drama. 24-14. Go Vols!!!
Likes: drvenner, VOLSONLY, tnktm and 2 others

Hope we come out and look like a completely different team with Harrison Bailey leading the charge. I hope JG never sees the field.

I expect Pruitt to trot out JG and for us to look similar as the last few games.

we suck
Auburn sucks too... just less than us
Likes: VolByLaw

Leeleesteeth said:
Screw it. Quit moaning and whining for a little while. Praise God we are still playing during this Insanity.
Bo Nix wets the bed. Chaney and Pruitt get their egotistical butts on the same page. Players play and lose the drama. 24-14. Go Vols!!!
Click to expand...

Leeleesteeth said:
Screw it. Quit moaning and whining for a little while. Praise God we are still playing during this Insanity.
Bo Nix wets the bed. Chaney and Pruitt get their egotistical butts on the same page. Players play and lose the drama. 24-14. Go Vols!!!
Click to expand...

Ron Swanson said:
50-0 Auburn
Click to expand...
Ok, who are you and what did you do with Ron?

I thought we all agreed to skip this week
Likes: VOLSONLY and GroverCleveland

Game will be competitive. 3rd quarter will come and AU will score 28 unanswered and beat us something like 45-17
Likes: BruisedOrange

Carry the fight to that buyout

My prediction is we will be talking about Teen Wolf in the third quarter
Last edited: Nov 20, 2020
Likes: Smokeytom, VOLSONLY, Rocky_Top_Vol13 and 5 others
New posts
You must log in or register to reply here.
<< Tennessee Vols Recruiting Forum
Share: Facebook Twitter Email Link