Banks was the defensive coordinator at his alma mater, the Central Michigan Chippewas from 2007 to 2009, serving under head coach Butch Jones.[9]
In 2007 and 2008, the Chippewas led the Mid-American Conference in rush defense and the 2008 unit led the conference in sacks with 35.[3] This helped Central Michigan secure invites to the Motor City Bowl both seasons.
The defense led the Mid-American Conference in total scoring defense with 18.9 points per game, was second in rushing defense with 122.8 yards per game and fourth in total defense in 2009. The Chippewas would win the MAC Championship with a 12-2 overall record and win the 2010 GMAC Bowl.[5]
Click to expand...
Last edited: Feb 15, 2021
Likes: Bms4880, C.W. McVol, captainfalcon777 and 3 others

How can he accept this job today? Banks are closed.
Likes: Neyland Rising, beneVOLence, VOLSONLY and 26 others
J

rdavis007 said:
I would take that luck most any day. What was it $900k for two months effort at a job you enjoy?
Click to expand...
Its a rough life. Lol

jackcrevol said:
Downhill, usually steep, on both sides sometimes toward a stream, river etc. Sometimes grassy, sometimes bouldery.
Click to expand...
I got through half of this post before I figured out it wasn’t about football. Still not convinced that it isn’t.
Likes: SmokinBob and NMVol

InVOLuntary said:
Can we really bank on this guy?
Click to expand...

He led coaching clinics in Memphis, and continues to know several coaches there. He’s very close with coaches at Houston, Melrose, Whitehaven and Treadwell. It’s not an active recruiting spot for PSU.
Likes: Neyland Rising, Bms4880, BisonVol and 33 others

RiotVol said:
I also appreciate "back end talent."
Click to expand...
We haven't had back end talent since Khalil MacKenzie
Likes: SD189 and RiotVol

T Dog said:
Yeah I rescheduled that one interview follow through and was bored so I looked some more on job boards and seen one closer. I called them and bam another interview tomorrow. I am still keeping that first one in back pocket just in case this new one low balls me, gotta get a certain amount or I will still be looking. But new one sounds real promising and I could see it turning into a career. I just feel blessed my lord and savior is giving me opportunities.
Click to expand...
Awesome and amen!
Likes: Smokey19rt and T Dog

Interesting to see who he brings with him. He has a huge network given the length of career and number of schools.
Likes: Neyland Rising, BisonVol, bpvol and 19 others

tn88volfan said:
Click to expand...
So could he be DC and DB coach. And what does Swain and Haynesworth think about this dude.
Likes: Smokey19rt

SoilVol said:
We haven't had back end talent since Khalil MacKenzie
Click to expand...
Kiffin's hostess program was the peak back end talent era
Likes: SoilVol and VolsDoc81TX

The Memphis to Knoxville pipeline 'bout to build a new world.
Likes: barrylee, Smokeytom, Paper_Towel and 10 others

Another good day for the Vols. Good DC hire. Players coach. High energy. Great technician. Players will love playing for him. That and Simpson delaying his announcement are very good signs. Moaners, keep moaning. It's what you do. GO VOLS!!!
Likes: Neyland Rising, Heeter, bpvol and 20 others

InVOLuntary said:
How can he accept this job today? Banks are closed.
Click to expand...

Bassmaster_Vol said:
Click to expand...
They refer to him in the article heading as just an assistant.

Can someone confirm the ink is dry? Tweets do nothing for me these days.
Likes: VolsDoc81TX

Also can we please finally stop the VQ doesn’t know anything narrative? They had Banks as a possibility long before anyone else.
Likes: Bruce Wayne

Geronimo said:
Can someone confirm the ink is dry? Tweets do nothing for me these days.
Click to expand...
Hubbs said its done. he's on the way
Likes: beneVOLence, VOLSONLY, Paper_Towel and 17 others 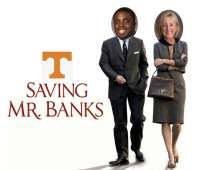 amazingGRACE said:
Also can we please finally stop the VQ doesn’t know anything narrative? They had Banks as a possibility long before anyone else.
Click to expand...
Didn't Price also say that he didn't have any interest?
Likes: barrylee, Smokey19rt, captainfalcon777 and 3 others

Bassmaster_Vol said:
Click to expand...
So Sallee thinks he'll be a Co-DC here?

amazingGRACE said:
Also can we please finally stop the VQ doesn’t know anything narrative? They had Banks as a possibility long before anyone else.
Click to expand...
As long as there is VN, there will be doubt.
Likes: VOLSONLY, VolsDoc81TX and Newman
New posts
You must log in or register to reply here.
<< Tennessee Vols Recruiting Forum
Share: Facebook Twitter Email Link