m1al said:
Sooo, WTF is going on in here? Been busy all day. Finally got a new job.. 🕺🕺 Good grief, what a long drought... We hire anyone else? Have the wheels come off? Are they wobbling? Any good, new rumors?
Click to expand...
Congrats on the job.....can I get a loan?
Likes: m1al

BigOrangeTrain said:
Sounds like all the smoke surrounding White meddling in the DC hire is true. Sheesh.
Click to expand...
Bruh
Likes: SLICKYINC

Ashevolle said:
Hoping this is all BS being leaked. I'd prefer to think that I'm an ant and DW and JH enjoy burning me with a magnifying glass.
Click to expand...
I think most of us feel this way. But given what we have put up with over the past decade, it’s hard not to feel like we are seeing the same song and dance being played out before us.

HoleInTheRoof said:
Everything was agreed to in principle. DC was on board with the coaches being brought in. Trivial detail is causing a hang up. One side has taken a step back.
Click to expand...
I obviously am not close to the negotiations, but hopefully vols don’t paint themselves into a corner on this.

drvenner said:
Depends on who you ask. Many seem to think that DW is meddling in the DC search just to ensure a minority is hired, just like he did at UCF, despite the fact that there is zero evidence that he has meddled at either university.
Click to expand...
Wow, haven't seen any of that, but I haven't gone back and tried to catch up.. Sounds like there's not much point to it..

In the absence of any real information, people will definitely make some up.. haaa
Likes: hooter vol, SmokinBob, drvenner and 5 others

MoCo_Vol said:
I think it was his Senior year I came to the homecoming game and he single handedly carried the team. Had like 400 or something total yards. I think he scored every single way possible except for receiving. I know he ran one in, threw one and had a return. Pretty sure he had a pick 6 too.
You remember that one?

For other posters, science's younger brother was about 5'10" or so and 175-185lbs. Was the starting QB, and played both ways (secondary) was 4.5-4.6 guy, the fastest guy on the team. We had a really strong WR too, kid was 6'4" and not much slower. They were fun to watch that season, despite the rest of the team being pretty weak.
Click to expand...
I came to all I could that year. Actually had grew to about six feet by the time his senior year came around.

He was the perfect definition of late Bloomer! Ha.
Likes: MoCo_Vol

tnhunter 10 said:
Congrats on the job.....can I get a loan?
Click to expand...
Well, I just accepted the offer. I have to start and then the first order of business is getting caught to where I can at least smell the horse's ass.. 😎
Likes: drvenner, CornFlake and tnhunter 10

Let me take a minute from the coach conversation to show off my new office. Painted myself 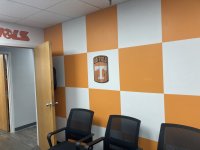 Likes: Neyland Rising, The Comb, Rocky_Top_Vol13 and 76 others

sutro said:
Wait, so you're going to be the new DC? Just to let you know, the new guy has a thing about leaks before announcements, so this may be short-lived. Congrats.
Click to expand...
Crap, I just leaked myself didn't I?
Likes: VolsDoc81TX and drvenner 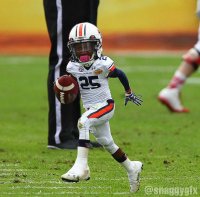 VolsDoc81TX said:
Birmingham obviously
Click to expand...
He just HAD to wave to the crowd.... 😂🤣😂🤣

volinbama256 said:
So we picked a former college WR who's most recently been an OC at Rice to come in and coach RB's over Mondario Hardesty..... interesting....
Click to expand...
Yeah because what has Hardesty done to deserve the job? The basketball game from Tuesday still have you shook?
Likes: SugarCC and drvenner

Josh Heupel is retweeting everything UT. From basketball to Condredge Holloway film. Heupel is definitely trying to embrace Tennessee.
Likes: Neyland Rising, LynxVol, Rocky_Top_Vol13 and 35 others

SpringBokVol said:
did that dude die????
Click to expand...
Almost definitely a traumatic brain injury velocity of that wheel (tire on a rim) could also break his neck...

volKano said:
Saw this pic in his Twitter feed

View attachment 351091
Click to expand...
Is it me, or is that very bizarre looking..
Likes: 5FingerVolPunch, Rizzo924 and BlackLabelVols

reVOLution33 said:
Because you said:


I said we were trying to hire a black coach and for some reason you felt it was necessary to describe what a "diverse" hire is.

I know what diverse/diversity means and I was clearly correct by saying we were trying to hire a black coach and not hire the best available coach.

I was pointing out the hypocrisy in the coaching search.
Click to expand...
That’s ignorant, but you’re obviously not gonna change your mind.

I’m not the one that keeps mentioning you, it’s not me following you around beating a drum here. 🤷🏻‍♂️
Likes: barrylee and JohnnyD1024