BruinVol said:
Much rather have WillM than Arnett and it isn’t close
Click to expand...
Crazy. Arnett >>>>>>Chump
Likes: captainfalcon777, VolByLaw and Smyrna ATL Vol

So uhh didn’t know this but Angelina Brummett who is coming as our Director of On-Campus Recruiting was also a UT Grad just like Lawson. *Not to mention she is light on the eyes.....

She worked with our Football Program under Butch. 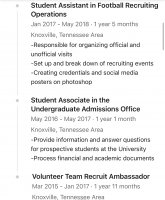 TrippieRedd said:
With each day passing, I get more and more pissed that we don't have any staff announcements.
Click to expand...
How dare he not consider your schedule on the announcement of the next DC. lol
Likes: VOLSONLY, VFLBerg, Exiled and 3 others

Has Atlanta Vol made an appearance yet since the hire?

NMVol said:
I feel like I need to point something out to some of you. Constantly jonesing for a HC with an OM connection is not a good look.
Click to expand...
It's a joke.
V

BruinVol said:
Much rather have WillM than Arnett and it isn’t close
Click to expand...
I don’t.... I want arnett
Likes: captainfalcon777, VolByLaw and Sleegro

cHiZzLeVOL said:
So uhh didn’t know this but Angelina Brummett who is coming as our Director of On-Campus Recruiting was also a UT Grad just like Lawson. *Not to mention she is light on the eyes.....
Click to expand...
Should I message her on FB and tell her?
Likes: Bruce Wayne and cHiZzLeVOL

Ulysees E. McGill said:
Mushdump? Yeah I agree, he is a good coordinator.
Click to expand...
I didn't realize it at the time but evidently he doesn't have a mitigation clause in his contract with SC so it looks like he gets 75% of his salary through 2024, something like 13.2 million. If he was to take another job it doesn't let SC off the hook for any of his buyout unless they work something out with him, like Cash Now.

The reason for the mitigation clauses was reportedly to prevent coaches from double dipping, getting paid for their new job and for their previous job at the same time, something Boom took advantage of when he was fired from UF and went to Auburn as the highest paid DC in the conference while drawing his full buy out from UF.

He may just want to take an extended vacation.

I sort of like the idea of having the offense and defense separate. Let Heupel go balls to the wall on offense and let the defense deal with whatever it has to deal with, which I think is what we're going to be doing anyway. jmo.
Likes: Ulysees E. McGill

TrippieRedd said:
Should I message her on FB and tell her?
Click to expand...
I mean you can, I’m not 😂 my wife might kill me. I’d rather not be dead.

I am 100% a sucker for the off-season workout stories. Always feels like the Rocky training montage to me.

cHiZzLeVOL said:
I mean you can, I’m not 😂 my wife might kill me. I’d rather not be dead.[/QUOTE

drvenner said:
Be safe, Brother.
Click to expand...
Welp...I made it, but that sucked. I don't mind driving in slushy snow, but that slush had turned to ice in a lot of places on the backroads...and there are no flat straight roads in these mountains.

I normally would tell my boss not gonna do it on a pre-sunrise bad weather morning run like this, but this client has 4th stage cancer and has to do a 4-5 hour treatment once a week, so I knew if I didn't do it somebody was going to have to, so I just white knuckled it and got it done...now my nerves are shot to heck, but I ain't got nothin to do but sit here gettin paid for being on VN for the next four hours..lol. 😉
Likes: Big Orange#1, Paper_Towel, VolsDoc81TX and 19 others

05_never_again said:
It's a joke.
Click to expand...
And a great opportunity to make a point that needed to be made.
Likes: SweetasSoda
B

Vols2DaWall said:
Crazy. Arnett >>>>>>Chump
Click to expand...
Just not a fan of someone trying to reinvent the wheel with a freakish defense

if we get him I’ll start believing he’s ahead of his time and a real trail blazer but for now I think that Texas and LSU passing is a red flag. Texas wasn’t able to hire a big name either

VFLPastor said:
I am 100% a sucker for the off-season workout stories. Always feels like the Rocky training montage to me.

Click to expand...
JH in the weight room...meanwhile Pruitt and Tee would be in their offices asleep, watching netflix.
Likes: Big Orange#1, Paper_Towel, VolByLaw and 14 others

VFLPastor said:
I am 100% a sucker for the off-season workout stories. Always feels like the Rocky training montage to me.

Click to expand...
Don't think I ever saw pictures of Butch or Pruitt in the weight room, watching and cheering on players And Dooley spent most of his time decorating his office than actually coaching.
Likes: Big Orange#1, VolsDoc81TX, VolByLaw and 10 others

BruinVol said:
Much rather have WillM than Arnett and it isn’t close
Click to expand...
I think I agree with this, although Muschamp doesn't want to be a DC long term and will jump at the first chance he gets. At least with Arnett I feel like if he's successful we might get 2-3 years.
Likes: Smokey19rt, Dudley Smith and BruinVol
N

BruinVol said:
Much rather have WillM than Arnett and it isn’t close
Click to expand...
Same. Muschamp fully focused on defense would be really good. I don’t think he wants any part of calling defense on other end of fastest offense though. Also would think TRob wouldn’t have took another job already either since those two are tied to hip.
Likes: Smokey19rt and BruinVol

What say you, @cHiZzLeVOL lol, should I

HoleInTheRoof said:
Just heard who our DC us and I have to say, I’m over the moon about it.
Click to expand...
Still got to take jabs at Atlvol I see.
Likes: VOLSONLY, Smokey19rt and SweetasSoda

scienceteaching_vol said:
Do I believe there are a few people on this site that have sources? Absolutely. I think the evidence would say some people have sources. There's been some specific things said by some people before it's been reported in the media.

Do I fawn over every poster that drops a nugget. No. Don't confuse positivity with naivety.
Click to expand...
K. Good luck in your future endeavors
Likes: Smokey19rt

SergeantVol said:
It’s just the fancy way of saying I spread my buttcheeks so my starfish can get some
Sun.
Click to expand...
post of the day iyam.
Likes: SergeantVol and gainesvol82

ACvol3 said:
So what is the difference in him telling us the two names and him saying what he did and then coming back and saying I told you so? You seem like a nice guy, so I don’t want to come off as bashing, but you are extremely gullible
edit- I just saw how new you are.. it’s understandable. You’ll learn
Click to expand...
Lol maybe you could learn to not take it so seriously. Just have a little fun with it.
Likes: VOLSONLY and VFLPastor

05_never_again said:
It's all a big fake out - Heupel is a smoke screen and we're actually announcing Lane as HC.
Click to expand...
wait...bringing back PA?
New posts
You must log in or register to reply here.
<< Tennessee Vols Recruiting Forum
Share: Facebook Twitter Email Link