BigOrangeTrain said:
Ok so we suck but we are supposed to be able to hire a great head coach?
Click to expand...
Yes

engineerVOL said:
So Heupel is just casually walking around campus and no one cares enough or recognizes him to report it.
Click to expand...
Well, there was a guy who thought maybe Pawn Stars was filming a remote segment on campus tomorrow, but other than that, no.
Likes: bullet20 and engineerVOL

VFL28 said:
Basilio saying we didn't even contact Herman.
Click to expand...
I love the notion that Basilio has a full list of everyone we’ve contacted. He’s been right about some stuff during this process, but I have a hard time believing Tony stumbled across White’s call list.
Likes: seaofORANGE22, coskramer, Bassmaster_Vol and 1 other person

volfan1631 said:
Maybe they will have pity on us and give us time served.
Click to expand...
Thats the hope. Find out what the NCAA stuff is and then make the move. We likely aren't going to be good the next couple years anyways, so why not wait a year or two, see what the NCAA doesn't then bring in your big gun.

We finally get it right and UT is great once again

omghulkhands said:
He’s probably done more damage to this football program than anyone not named Lane Kiffin
Click to expand...
So can’t cut off your nose to spite your face. Thought we had a pro negotiating for us now.

JT3 said:
Why would TE come for the same position? TB confused.
Click to expand...
Ucf would hire Elliott

JT3 said:
Why would TE come for the same position? TB confused.
Click to expand...
No, don't be surprised if UCF hired him. Their job is viewed as a better job than TN
Likes: JT3
P

Yeah this is a wash. I seriously hope I’m wrong but this just screams desperation. Hopefully we can break even for the near future but I don’t expect much more than that. I’ll be anxious to hear what the InSiDuUuUurs have to say about this for their daily dose of forum karma but it’ll likely reiterate what we know. No one will take us on a date. Goodnight all
Likes: mr.checkerboards

drvenner said:
*throws
Click to expand...
Not very far if it’s you

SoilVol said:
10 opt-outs, Covid year, no offseason, etc. You can't really assess his abilities as a head coach with such a small dataset. He's only been there 3 years, and 1 year was obviously Covid. First year was undefeated, and the second year (IIRC) he lost his star QB and still had a very impressive season. Personally, I'd like to see what he'd have done with 5 or 6 seasons at that level.

But he's still consistently produced on the offensive side of the ball everywhere he's been. There's enough data to show that, at multiple levels. There's possibility if you pair him with a strong DC that we could field some good teams. But as we've discussed ad nauseam, hiring a head coach is a crap shoot.
Click to expand...
We’re the 10 players any good?

engineerVOL said:
So Heupel is just casually walking around campus and no one cares enough or recognizes him to report it.
Click to expand... 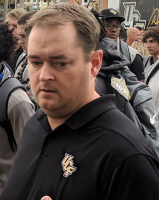 There are probably a half dozen guys that look just like this walking around on UT's campus at any time.

The most distinct thing about him is the lack of distinct features.
Likes: Big Orange#1, radford, berryvol and 22 others

I feel the same. AV will let us know
Likes: KPT_VFL

engineerVOL said:
So Heupel is just casually walking around campus and no one cares enough or recognizes him to report it.
Click to expand...
Absolutely no way he is on campus and someone not have a pic of him.
Likes: Sleegro and engineerVOL

Burn it down
Click to expand...
It doesn’t bother me. Same as the one’s screaming NOT to pay Butch.
M

If it’s not Heupel if hope AP gets crushed by the media/fans
Likes: radford, 5FingerVolPunch, VolByLaw and 10 others

5 years. No matter what

mr.checkerboards said:
Basilio said hes not sure Steele sticks around
Click to expand...
AP just said the same. Heupel’s success depends on that DC hire. He better get it right.
Likes: Dudley Smith and mr.checkerboards

JT3 said:
Why would TE come for the same position? TB confused.
Click to expand...
I think he means TE go to UCF as HC
Likes: JT3

Nashvegas31 said:
He apparently doesn’t play nice with boosters so you knew our crew ain’t hiring him since he won’t be a puppet on a string
Click to expand...
Not just boosters. Everyone at Texas was happy to see him go. Read up:

InstrumentalVol said:
Brandon Johnson going to be very confused after his new coach bolts for UT lmao
Click to expand...
Didn't his uncle or someone like that post in here some. Tag em' and see what they know.
Likes: 4chrissy
New posts
You must log in or register to reply here.
<< Tennessee Vols Recruiting Forum
Share: Facebook Twitter Email Link