Bassmaster_Vol said:
Turns out that guy did not have Corona virus. But something was clearly wrong with Trump today.
Click to expand...
The Brazilian President didn’t, but a second non-governmental person he took photos with has tested positive.
Likes: volatil, barrylee, hooter vol and 2 others

OrangenSC said:
What you said may not be factually incorrect since it's just an opinion, but I think the numbers I posted indicate that our hospitals have a ton more capacity than what we are now using. More specifically, this line of comments refers back to us not being able to handle what Italy is experiencing.
Click to expand...
ICU beds and ventilator numbers are well-established, and we don’t have enough if this thing ramps like at has elsewhere. This ain’t the flu.
Likes: barrylee, hooter vol and InVOLuntary

Devo182 said:
Congrats on the future sex.
Click to expand...
So she a stewardess?

Guys, this SC game is very important. They beat Ga. we need to beat them. That would show we’ve really made improvements this season
Likes: Brillovol, Buddy’s Bandit, bullet20 and 3 others

Dad gummit! They just scored on their first play! Where was that Pruitt defense? Not a great start. 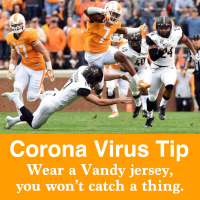 Bassmaster_Vol said:
Dad gummit! They just scored on their first play! Where was that Pruitt defense? Not a great start.

Muschamp is laughing. I can’t stand that dude
Click to expand...
I bet we win, end up blowing them out actually
Likes: Bassmaster_Vol and VOLSONLY

mr.checkerboards said:
I bet we win, end up blowing them out actually
Click to expand...
Would be huge after spotting them 7. But what are we gonna do at QB? We just started JJ. No way they go with JG, right?
Likes: titansvolsfaninga, barrylee and Ulysees E. McGill

Bassmaster_Vol said:
Would be huge after spotting them 7. But what are we gonna do at QB? We just started JJ. No way they go with JG, right?
Click to expand...
I hope Shrout and Mauer play
Likes: VOLSONLY and Bassmaster_Vol

Well boys, as long as they keep stocking trout and beer, I think I can tough my way through all this.

Bassmaster_Vol said:
Would be huge after spotting them 7. But what are we gonna do at QB? We just started JJ. No way they go with JG, right?
Click to expand...
You’re a weird guy ace
Likes: Brillovol, Ryno14, OGbabyaviVol and 8 others

Bassmaster_Vol said:
Maurer has a concussion. No way he’s playing
Click to expand...
I forgot about that, Wild Dog it is
Likes: Bassmaster_Vol
V

My main fear is that we're more on-course to be like Italy. As I've revealed in prior posts, I'm an ER doc in the San Francisco area. We had our first positive at my hospital in January. The testing criteria were so geographically strict initially that we were basically shut down from testing anyone aside from critically ill, admitted patients for the next month and change. We could see on the ground that we were letting through suspicious cases, and so it was no surprise that we had community transmission when we did with the degree of business travel from Silicon Valley to China (similar in the Seattle area). I have implicit trust in the CDC - the folks I've interacted with from CDC in the past have been nothing short of spectacular. Based on what I understand, they tried to make a comprehensive test - a COVID component (which functioned perfectly) and a much, much broader PCR viral panel that likely mirrors a test I have available at my hospital (testing for 15-20 common respiratory viruses and a few bacterial pathogens) which we use frequently to avoid invasive workups in small children and which is also useful in the elderly. That would allow hospitals that didn't have the capacity to run a PCR test on their own to not only get a +/- on COVID, but would give some confirmation to a negative COVID test by potentially providing an alternative explanation for symptoms with diagnosis of another viral illness. The viral panel was evidently the problem, as it returned inconclusive results. That forced a recall, and set us back by weeks. They tried to make it perfect for all settings, but proved once again that doing something very complex, for the first time, at speed, is very hard. The only real knock I have on the initial plan was that I think that there was a false sense of security that in concert with the very draconian response in China, we would be able to catch cases with airport screening, and that locally-based testing - versus a 3-4 day turnaround to send a test to the reference lab in Atlanta - wouldn't be necessary. I think that they were expecting much lower numbers of tests initially, and the lack of available test kits forced them into very restrictive testing criteria.

As a result, we missed our chance at any significant local control of infection here. An earlier declaration of a national state of emergency would have at least loosened the reins on University medical centers and private labs to get their own tests approved sooner. That has finally happened, and the news today was positive, though far, far too late.

I don't have exact numbers, but I would imagine that we are in the mid-teens in terms of positive tests in my medium-sized hospital. A couple deaths (one as-yet unreported, likely due to coroner review). Five or so positives in the hospital. A number of recovered patients discharged. A number of pending tests in the ED this morning with very suspicious stories.

Testing has definitely improved in the last week, and I am now able to be a doctor again and make testing decisions based on my clinical thinking, which is a definite plus. My gripe is that if we all had been able to do this a month or two ago, we might have been able to slow community transmission with strict quarantines for positive patients as opposed to a catch-and-release method with a hopeful self-quarantine. Much less effective if you as a patient can convince yourself that you might not have the disease and you aren't really that likely to kill your neighbors accidentally if you go out.

This is very much hub-and-spoke transportation-based spread. Initial cases largely clustered around major international airports. Now new cases cropping up in regional airport cities. Soon to arrive in rural areas. We aren't likely to be as good at strict quarantine for hard-hit geographic areas as the Chinese. Lots of cat-herding would be necessary to make that happen, and a nation of 330+ million unruly, self-important and indignant cats will make that quite difficult, until the cats are well and truly concerned.

We found out thursday evening that today is the last day of school for my three kids until April 20th. While that really, really sucks for a household with two full-time physicians and no local family support, I'm in full agreement. Each day in the ED over the last two weeks has had just a bit more flavor of exponential spread - more and more suspicious cases each day. My hospital is still coping relatively well, but even before this started, we were running at close to capacity with general medical illness and wintertime flu, pneumonia and other viral illnesses. The hospital has definitely hired up and tried to open new areas that were previously underutilized in other roles, but the fact remains that we (and most other hospitals) don't have that much unused capacity left over.

The whole idea of shutting everything down is to decrease the rate of transmission and flatten the exponential growth curve. The same number of people will contract the virus, but over a longer time period, hopefully leaving us in a situation that we can flex up to handle. The alternative (which is feeling more concerningly real by the day, at least in my area) is that hospital resources are at some point suddenly outstripped by the flood of patients and we are in an Italy, Wuhan or Katrina-like nightmare situation, making horrific decisions because we have no other options.

That's the rationale behind all the seemingly knee-jerk closures. If you're in East TN, behavior change and expanded testing still have a chance to help out significantly given the likely small degree of local spread to this point. This isn't some horrible disease that will kill us all. It is far, far worse for those in my parents generation than for me or my kids. But given the prolonged recovery time, even five of those patients per day admitted to most hospitals will quickly outstrip our capacity to keep things under control. The real challenge now is to see if we can mount a coordinated public response to limit the rate of spread to avoid a worst-case-scenario. If we can do that, the next step will be looking outward to try to help keep the rest of the developing world (just now starting to be touched by COVID) from arriving at the worst-case-scenario, with far more dire political stability and societal consequences.

In the meantime, this is going to suck for at least the next few months. The economy is going to take a huge hit. Try to support local businesses - get take-out even if you're too concerned to go out to dinner. Small businesses are going to need all the help they can get. The other group that is going to be absolutely (and legitimately) terrified by all this is the over-60 crowd. Offer to run errands, get groceries, so that they don't have to run the risk of doing it themselves. You may save a life. At the least, you'll take some of the fear out of their daily lives.

This was always coming, regardless of governmental missteps on both sides of the Pacific. And something like this will always come again - it's just a matter of time and chance. I think that the lesson is that regardless of political divisions and the hyperpartisanship of the last few decades, we are, together, facing a stark threat. If we can pull in the same direction as a group (and more broadly, as a species), we can muddle through, hopefully without too much personal or societal damage. If we can't, this gets much uglier and the fallout reverberates around the world for years.
Click to expand...
Long but someone on the front lines. Thanks for your contributions!
Likes: VolsDoc81TX, titansvolsfaninga, TennacJed and 3 others

mr.checkerboards said:
I forgot about that, Wild Dog it is
Click to expand...
Shrout in now. Wonder how much we’ll trust him
Likes: Ulysees E. McGill

Bassmaster_Vol said:
Shrout in now. Wonder how much we’ll trust him
Click to expand...
I bet not too much, if he sucks Pruitt will pull him
Likes: Bassmaster_Vol

Dang it. Refs are on SC’s side. We just got screwed on a ineligible player downfield penalty. JJ fosses a dime tho
Likes: Ulysees E. McGill

Bassmaster_Vol said:
I’m 12 mins in if y’all want to join this discussion

Coke Zero is hard to snort

Goodness. When this is all over, they gonna be a bunch of broke mofos running around, trying to find receipts for their $2700 worth of TP.
Likes: drvenner