PLAYER RANKINGS (do they matter?). Let the debate!


people will love to point out the 3 star who had an amazing career and made the NFL but fails to point out that the teams winning it all every year signed majority 4-5 star players.
Click to expand...
Doug Atkins didn't have no stars and look at what he done

9876543vol said:
Rankings follow top coaches, not the other way around.
Click to expand...
No they don’t. Plenty of 3 stars go to Bama, Georgia, etc

Orange. said:
Everyone who loves to talk about the theory, practice, competence, manipulation, and effect of the star system and player rankings should have a special place to devoted to this interest imo.

Also, the RF would benefit -- not only by having all the opinions and information on this subject in one place -- but the individual individual player thread would benefit because news specific to recruits would not be overwhelmed by posts about rankings in general.

If someone quoted your post in a player thread and posted and replied to it here, do you think it would help to have everything in one place?

Would some people knowledgeable on and interested in player rankings be willing to take the lead here and explain why how much rankings matter? Ot how they don't?
Click to expand...
I think this is a good idea. Some people on here are very knowledgeable when it comes to rankings, stats, etc. and have well informed perspectives on these issues. I think you’ll find though that if the usual suspects (sjt and/or others) keep shouting down members with differing opinions, then this thread will become the same type of hot mess that we’ll do our best to avoid.

This is a page for the same old "If we don't have a number one ranked recruiting class the ___________________" (ie coach is clueless, season is a bust, I will give my donation to someone else, and "anyone who doesn't agree with me is an idiot jerk") crowd will fill with venom. Way to go OP!

Give me a bunch of those guys and I’ll win a lot of ball games.

I guess we need to simplify this for some.

If you are giving me 20 gift cards I will take the second group.
Likes: jwilliams, BlinghamptonVol and unfrozencvmanvol

Where some folks, myself included, have a gripe is the notion that rankings themselves have intrinsic value. They do not. The kid makes the stars, the stars don’t make the kid.

Boy this topic is never going to end. It’s too exhausting to deal with on here. People say them same things and nothing changes. Let it go and watch your team play. Not much else you can do and both sides are beating there head together trying to prove points. In the end nothing has changed. Let’s play football because I have had my fill of star debates and NIL. GBO! It’s Football Time in Tennessee!
S

For sure the truly talented guys the top schools get 4 stars, but so do a bunch of other guys that don’t hold up.
O


people will love to point out the 3 star who had an amazing career and made the NFL but fails to point out that the teams winning it all every year signed majority 4-5 star players.
Click to expand...

OH please. Details! Details! But... But... What about Cedric Tillman?

Dudleys87 said:
It’s not about rankings.
If they’re coachable
If they’re willing to sacrifice
If they’re a team guy
If they buy in

overseasorange2 said:
OH please. Details! Details! But... But... What about Cedric Tillman?
Click to expand...
Want to pick Tillman and the 24 guys rated nearest him?

I’ll take the top 25 players from the same class.

Who do you think would have the better group of players?
Likes: BucksnortVol, Winchester73 and Devo182
O

Vol8188 said:
Want to pick Tillman and the 24 guys rated nearest him?

I’ll take the top 25 players from the same class.

Who do you think would have the better group of players?
Click to expand...

sjt18 said:
So you are saying those teams were talented AS A RESULT OF being ranked higher? I just responded to more of BOT's non-sense in another thread. It is pretty easy for them to take a peak at who Saban, Day, Smart, and Swinney are recruiting... look at their measurables then slap a high rating on them. They know those programs are winners, send lots of guys to the NFL, and have a great process for recruiting.

But when the recruiting sites have to go more on their own... they simply DO NOT predict winners. IIRC, only 9 of the final top 25 last year had averaged a top 25 class in the previous 4 years.


Here are the standings from last year and the 4 year composite talent ranking in the SEC according to 247:

You can attribute part of that to coaching but the West according to the talent 247 says each program has... is essentially upside down. They can take cues from UGA and Bama but when they have to evaluate more on their own... they don't predict winners. Recruiting rankings do not predict winners... except for the really easy predictions.
Click to expand...
Then why do those programs all have 3 star players listed as signing with them if they're just giving artificially high grades for being committed to a specific team?

Yes recruiting rankings predict winners. In math we call this a "strong correlation". 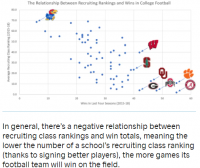 Recruiting sites piggy back off of successful program offers. There are obvious elite recruits in every class and they have typically ended up at Bama, UGA, OSU, and Clemson over the last ten years.

My biggest issue with recruiting sites is they bump a lot of 3 stars that commit to the programs I mentioned above which inflates the class ranking, when in reality it’s a crapshoot after the top 100 players.

Bottom line, football programs have their own recruiting databases that are much better than 247, Rivals, etc. These sites are for the fans.
Likes: LittleVol

How many 5 star flops have we had, I can come up with many

Yes in aggregate and on average stars matter. Are there 3 star hero’s and 5 star zeros, sure. Do more 3s make to NFL than 5s, yes…population is in their favor. Are top 5 classes better than classes ranked 15-20, all day. Stars matter, move on.

How many official visitors can Tennessee get for football during a calendar year?

There is an undeniable correlation between recruiting rankings and success. But the services adjust their rankings based on what proven staffs do on the trail. Hundreds of good players are overlooked, and probably just as many are overvalued every year.