He is the president of the saban “nut hugger” fan club.
Likes: marcusluvsvols

Alto1 said:
He is the president of the saban “nut hugger” fan club.
Click to expand...
🤣

Sounds like he just recently signed a contract extension with the Mothership.

You Don't Have No Idea How Little I Care

tdawgs said:
Am I the only one that gets sick just looking at the guy. His obsession with bama is so obvious and Espn loves him for it. You're a grad of UT for pete's sake! I can't watch Sec network because of this guy anymore Thoughts. Comments. Who agrees?
Click to expand...
He suffers from assholism
Likes: marcusluvsvols

RTE said:
You don't like Murleen from Andalusia, or Big Billy from Talladega?
Click to expand...
Not familiar with them, but I'm sure they're delightful.

give_him 6 said:
Sounds like he just recently signed a contract extension with the Mothership.
Click to expand...
He did. He was already making $5 million a year, so I’m sure a got a bit of a bump as well.

I only watched Finebaum because I like SEC sports and figured he was a good source for news. However, I found him a complete bore wasting my time with meaningless chatter. I can't watch that crap any more. Kinda like watching CNN propaganda hoping to get the news. Never delivers substance. Just biased gossip that makes a man dumber.
Likes: TNnative, Zues1, Nickid1975 and 1 other person

I’ve never really watched much Finebaum. To me, he’s just not that interesting.
Likes: kcvols1, golfballs and marcusluvsvols

Finebaum made his money by discussing news in the SEC and then either antagonizing or encouraging fans of football programs who listened to him. To maximize his impact, he needed an audience that would call in and make fools of themselves, complain like gibbering morons, and ramble on like they left the better part of their IQ in the gas station toilet bowl just that very morning. What better place to find such fine folk than Alabama?
Likes: Boogievol and marcusluvsvols

RexTheWonderDog said:
He admitted years ago that his childhood hero was Joe Namath and that as a kid he pulled for a different SEC team other than UT.
Click to expand...
Hell, I loved Namath as a kid. I loved the white shoes, mink coat & hot women.
Likes: RexTheWonderDog

Boston Vol said:
He did. He was already making $5 million a year, so I’m sure a got a bit of a bump as well.
Click to expand...
Woah I had no idea he had that kind of listener/viewership
S

wmcovol said:
He owes his livelihood to Alabama football. They made him.
Click to expand...
Bingo, he knows he's a millionaire because the Gumps sat on the edge of their seats with mouths agape, taking in his radio show. Which vaulted him to his current gig with the SEC's version of the Jerry Springer show. They do have an occasional good interview with SEC coaches.
Likes: kcvols1

His family has an above the ground gene pool. 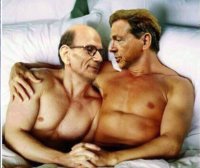 tdawgs said:
Am I the only one that gets sick just looking at the guy. His obsession with bama is so obvious and Espn loves him for it. You're a grad of UT for pete's sake! I can't watch Sec network because of this guy anymore Thoughts. Comments. Who agrees?
Click to expand...
It's got to do with "MONEY" his that is. He rides the "Bama" wave. More Bama fans, more support for him and ESPN/SEC Network. Lit Bama fall (with/when the lose of "Satin") and see where ESPN's support goes. Very likely back to Ohio St/NDame... Their SEC support picked up a whole lot with the making of the SEC network. When Fine Bomb doesn't have Bama, then he will be just another sport's voice of no consequence.
S

VOLfrombama said:
I can promise you one thing, if we were winning at a clip even remotely close to Bummer, he would be gushing about UT at every opportunity.
Click to expand...
Doubt it. He knows where the butter on his bread came/comes from, and it's not Tennessee.
Likes: AllVols

I think his show relies on a lot of really dumb drunk people calling in. So there's that.
Likes: gone2thefarm
S

GoVols15 said:
I thought the SEC commish gave more of a political speech rather than talking about SEC football ... terrible!
Click to expand...
It didn't go unnoticed that he implied that "get vaccinated or forfeit games". Good for him! The same should go for all school kids. We already have a bunch of shots kids must have to even start to 1st grade and before. One more on the list should make no difference.

RexTheWonderDog said:
He admitted years ago that his childhood hero was Joe Namath and that as a kid he pulled for a different SEC team other than UT.
Click to expand...
Yea, I believe he grew up in Memphis and was a Bama fan.
Likes: RexTheWonderDog

It's a little more complicated than just saying $$$$$$.

Finebaum started out as a reporter. Not long after graduating from college (yep, UT Knoxville) in '78, he landed a gig writing for the Birmingham paper. Hey, you take the jobs where you find them. At that point he was still bleeding orange...I think. Still at that job, he broke the story on Antonio Langham hiring an agent while a student at Bama...and got the program on probation. Yep, still bleeding orange, heh. That was in '93 or '94.

The dude has a ton of journalism awards, so apparently his writing skills are pretty darn good.

Well, you know how the evolution happens. Hot sports writer gets interviewed on the local sports radio show...then gets a regular weekly call-in with those guys...then gets his own show. At this point, no surprises. Finebaum has a good voice for radio.

But this is, I think, where his blood starts turning from orange to crimson. Because it's much harder not going native when you're interacting in real time with a bunch of folks.

Anyway, he does well with radio, too, and somehow parlays that into TV gigs. Lord knows how he pulls that off, he has a face that could scare ghosts. And by the time he is making the big $$$$ with ESPN, I think he is already converted to the evil empire's side.

So follow the $$$$ isn't quite right. More accurately, follow the influence and pressure of the crowd. If he'd had more strength of character, he probably could've resisted. But...well...he's Finebaum.

p.s. I believe he spoke the truth when he said he was a big Namath fan as a kid. But I think he only said he was also a Bama fan to endear himself to the bulk of his radio listenership. But who knows.
Last edited: Jul 20, 2021
K

Hacksaw said:
This. He first gained notoriety in Bama with a radio show that catered to Tide fans. And without his rabble of drunken Bama nitwits his SEC Network show would've been cancelled a long time ago.
Click to expand...
He actually first gained notoriety at the Knoxville News Sentinel. I can remember when he moved from Knoxville to the Birmingham news paper. That was long before sports radio.
New posts
You must log in or register to reply here.
<< Tennessee Vols Football Forum
Share: Facebook Twitter Email Link