Jackcrevol said:
Keep an eye on App State here.
Click to expand...
If he isn’t a Vol being a Mountaineer would be the next best thing.
Likes: hjeagle1vol, PA Vol, Enki_Amenra and 2 others

appvol said:
If he isn’t a Vol being a Bucaneer would be the next best thing to Voldom. Mountaineers can go drink pig swill
Click to expand...
-90's rivalry, prolly.

After getting a scholarship offer from Tennessee less than three weeks ago, Isaiah Shirley now is ready to see for himself what the Vols have to offer. The Class of 2023 edge rusher from Watauga High School in Boone, N.C., told GoVols247 that he's scheduled to travel to Tennessee on Sunday for an unofficial visit that will give him his first look at the program.

Tennessee gave the 6-foot-4, 250-pound Shirley his latest offer on April 25. The Vols joined Vanderbilt as the second SEC team to join the race for him, and he's now being pursued by at least 15 schools.

Boston College, Duke, Louisville, N.C. State, Virginia, Virginia Tech, Wake Forest and West Virginia are among the other schools in the running for Shirley, who's ranked by 247Sports as the No. 44 edge rusher in the 2023 class and the No. 17 junior from the state of North Carolina.

He said Tennessee coach Josh Heupel's staff recently has stayed in contact with him on a regular basis. Last month, Shirley tagged Tennessee defensive coordinator Tim Banks and defensive line coach Rodney Garner on the tweet announcing his offer from the Vols.
"They have been pretty consistent since they offered," Shirley said.

The lone prediction on the 247Sports Crystal Ball points to N.C. State as the current favorite to land him. But he said he's intrigued by his opportunity at Tennessee, and he's looking forward to seeing the Vols on Sunday.

"Tennessee has a rich history and I wanted to go give it a look," he said.

Shirley recorded 36 tackles, including nine tackles for loss and 5.5 sacks, in eight games during his junior season.
Click to expand...
-Callahan
Likes: hjeagle1vol, clt_tiger, Scvol7906 and 18 others

HoleInTheRoof said:
Click to expand...
That kid is sharp as a tack, impressive!!
Likes: hjeagle1vol, Pacer92, Palm Beach Vol and 1 other person

Ericvol2096 said:
That kid is sharp as a tack, impressive!!
Click to expand...
Doesnt sound blown away
J

Ericvol2096 said:
That kid is sharp as a tack, impressive!!
Click to expand...
Wow, incredibly impressive. Maturity off the charts.
Likes: hjeagle1vol

Jackcrevol said:
Doesnt sound blown away
Click to expand...
I wonder what his interviews from visits at other schools sound like
Likes: lenoxvol 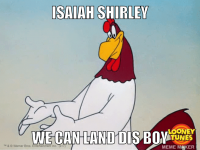 Isaiah Shirley remembers traveling to Tennessee’s campus nearly six years ago to see his hometown school, Appalachian State, play against the Vols inside Neyland Stadium. After getting a scholarship offer from Tennessee in late April, he didn’t wait long to make the trip to Knoxville again and take a closer look at the Vols.

The Class of 2023 defensive end from Watauga High School in Boone, N.C., visited Tennessee on Sunday after the Vols gave him his second SEC offer on April 25, and he said they made a strong impression on him while he was there. He said it was a “good visit” that improved their standing with him, but he’s “still evaluating” things and trying to decide where they might stand among the 15 teams pursuing him.

“I would say definitely, when UT offered me, that’s intriguing to anybody, to any guy who’s a football guy,” said Shirley, who’s ranked by 247Sports as the No. 45 edge rusher in the 2023 class and the No. 17 junior from the state of North Carolina. “You know their history. You know their rich history, so it’s something you kind of can’t really ignore, I guess, is the way to put it.

“So I went over there, checked it out,” he said Monday night. “And, it being only a day after, I’m still trying to evaluate, kind of see where it kind of lies. … But I would say they have bettered their position, just because I didn’t know them before. I know them now.

“I can’t tell you how high they went up or not, to be honest with you right now.”

The 6-foot-3, 259-pound Shirley said he “wasn’t sure how much they really wanted me over there and stuff like that” when Tennessee coach Josh Heupel’s staff first reached out to him.
During Sunday’s visit, he said the Vols “definitely made me feel like a priority — at least on that day, for sure — and they even went out of their way to even say I’m a priority for them and they need me.”

Tennessee defensive line coach Rodney Garner, defensive analyst Levorn Harbin and Heupel himself all spent plenty of time with Shirley on Sunday. Shirley said he “was the only recruit on campus, it seemed.”

“They said they really like my measurables, how I bend, how I play and how my hips — my hips are loose, stuff like that — all the attributes that they are looking for in a defensive end,” he said. “And then they were kind of just like, ‘Once we got to meet you, too — I mean, your story and the type of person you are.’ He said, ‘Not only do we want the football player, but we want the person.’

“He was kind of just talking about how he could see me being a leader. He said, ‘Leaders are hard to come by, and that’s probably why you (are being pursued by) these other universities and us now.’”

Shirley was already familiar with Neyland Stadium before Sunday’s visit. But he said Tennessee’s campus “looked a lot different, too, believe it or not,” compared to what he saw in 2016.

“They’ve got a lot of big things they’re doing with the facilities,” he said. “The Peyton Manning Room was really cool. You can definitely tell it’s SEC, for sure, so it was a good visit. We had a good time meeting with Coach Heup and Coach G and Coach Harbin and all them, and everybody was just obviously going to be so nice. They were nice and seemed like good people, for the most part. …

“We kind of drove around campus on a golf cart — that type of deal — looked at the facilities, looked at the plans that they’re going to do for the facilities, which looks like it’s going to be one of the best in the country — if not, second to none, really — that they’re trying to build there. And I’m standing there thinking, ‘How can you keep making it better?’ They’re working on that.”

Garner talked extensively with Shirley, he said, and explained “kind of where he sees me in the defense.” Shirley said the Vols “see me as a true strongside defensive end” who also might be capable of sliding inside and being “an athletic three-(technique defensive tackle) on passing downs.”

A longtime SEC defensive line coach who has produced a number of NFL defensive linemen, Garner is one of the reasons Shirley is intrigued by his opportunity at Tennessee. He said the chance to play in the SEC probably won’t be a factor in his decision.

“I kind of just really get down to the people and the place and, is it right for me?” Shirley said. “SEC attached to it or ACC attached to it, at the end of the day, that’s not really going to factor in way too much for me, to be honest with you.

“But I did like Coach G a lot — very genuine, very spiritual man, and that means a lot to me because of me being a Christian and stuff like that. He seems like a follower of Christ and the kind that treats all his players like he would treat his own kids. That’s just the vibe I got from him in 45 minutes talking to him, sitting down, and then throughout the day talking to him.

“He’s got a crazy resume, and he develops guys and he keeps in touch with those guys, too — keeps relationships with them. He knows a thing or two about how to develop D-linemen, for sure.”

Shirley said N.C. State, Duke, Tennessee, Virginia, Virginia Tech and Appalachian State are the teams that have been recruiting him hardest. The Vols have joined that group since extending an offer to him a little more than three weeks ago.

He's not sure yet whether he will visit the Vols again, but he said they will “be in the talk for one of those” two remaining official visits, “maybe during the week or something like that.”

“(I will) kind of let the emotions die down from it and kind of just really look at — because those facilities are so great, but you’ve got to look beyond that because, at the end of the day, that’s not going to make you a better football player and a better man,” Shirley said. “So kind of just look at the people, if it’s in the right place and if it fit me — those are the kind of things I look for. So, like I said, I’m still evaluating.”

He said he hopes to make his college decision around the “end of July” or “a couple weeks into August at the latest.”
Click to expand...
-Callahan
Likes: bigvol67, wwilso29, F0Rt_V0L and 7 others