take all the bigs.
G 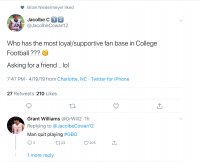 “I speak with Tennessee every day,” Cowan told GoVols247 on Sunday during The Opening regional. “Daily with Coach (Jeremy) Pruitt, Coach (Chris) Weinke, Coach Rocker, Coach (Chris) Rumph. They need players that can come in and make an instant impact,” Cowan said of the daily message he hears from the Vols. “They feel like I’m a player that can definitely do that. “I have the potential ability to be a great player and the athletic, skill, the intangibles of what it takes.”

The thought of Rocker helping him build on that talent — joining names like Dee Ford, Nick Fairley, Greg Hardy, DeMarcus Ware and Osi Umenyiora, among others from Rocker’s coaching past — is an idea he’s open to. “Just knowing the guys he’s put in the league,” Cowan said. “Of course he played defensive line himself, he played in the league himself. He’s just a mastermind of that particular position. He knows the craft. He knows what it takes to get (to the NFL). I know guys that are in the league, guys that are currently playing for him. Coach Rocker is a great guy. He knows what he’s doing.”

Cowan said he’ll likely visit Georgia next month, with trips to South Carolina, North Carolina State and Ohio State in his plans. Oregon and Oklahoma aren’t out of the question, either. Tennessee on March 2, for a junior day in Knoxville, and North Carolina earlier this month are his two most recent visits, making two trips to Chapel Hill since the hiring of Mack Brown.

“Really and truly I’ll just be taking visits,” Cowan said. “I’m still trying to have fun, but it’s getting down to the nitty gritty. These next couple months will really determine it. “I could commit this summer or could be all the way up until the early signing period.” Through May, Cowan said he’s still using unofficial visits. Then he’ll start making plans for officials. Is Tennessee in the mix for one? “I won’t confirm anything,” Cowan said, “but yeah, they’re in there.”
Click to expand...
-247
Likes: WilliamDuVOL, sneakergawd, highspeed and 5 others

Among other notable visits this week, Tennessee was out and about to see Jacolbe Cowan. The Charlotte product will be back in town in late May or early June, he told Volquest earlier this week. He appears set to do something closer to his senior season.
Click to expand...
-VQ
Likes: Vol8188, ChiTownVol, T Dog and 3 others

Hasn't he fallen bigtime, in the 24/7 rankings?

reVOLution33 said:
Hasn't he fallen bigtime, in the 24/7 rankings?
Click to expand...
Yes, was in the top 60 earlier this year.

reVOLution33 said:
Hasn't he fallen bigtime, in the 24/7 rankings?
Click to expand...
Probably went to a camp and won MVP
Likes: Coach Punk, SmokeyDaBear, WilliamDuVOL and 13 others

Blake25p said:
Yes, was in the top 60 earlier this year.
Click to expand...
Yup. Still top 100 on rivals.
Likes: SmokeyDaBear

Not coming. Funeral came up