Thank You Sir, May I Have Another

What was the most satisfying win for you in 2019 and why?

For me it was the Vandy win. I sat in Vandy stadium in 2018 and watched the Vandy faithful dancing in the isles as they were laying the beatdown on my Vols in the 4th quarter. That game was a low point for me (lowest until GA ST) and I hoped that Pruitt and staff would get it turned around in 2019. Well we all know how 2019 turned out. At 1-4 I was terribly worried about our Vols but they turned it around and made me proud to be a Vol fan. The Vandy win in 2019 was one more marker that we will once again be a power in the conference. Yes the USC jr, Mizzou, KY and Miss St wins were good, but never in the recent history of the Vandy/UT series had we lost so many games to them as we had in the last 5 years (prior to 2019).

In 2020 we may wind up being third in the SEC east again but that is a far cry from where we have been in the last 10 years. At least some respect and maybe some fear will be seen in the eyes of the opponent in 2020 and beyond.

Edit: Second for me was Mizzou because they have owned the series since entering the SEC. Third was USC jr because Muschimp is a jerk.

South Carolina because Muschamp's dominance of the Vols was getting old.
Likes: AF_VOL, RDU VOL#14, LittleVol and 57 others

I love kicking the sh%$ out of the Big-10
Likes: Kngsport VFL, MemphisVol77, 12 Monkeys and 1 other person

There's no if this team is not built to come back

Vol_from_86 said:
South Carolina because Muschamp's dominance of the Vols was getting old.
Click to expand...
I agree. Hearing about it got old too.

Vandy was satisfying too, but I had convinced myself that there was no way Pruitt was going to lose to them again, so SC was more.
Likes: MemphisVol77, StarRaider, joepuppy and 2 others
N

Week by week, each win was satisfying because each win continued to build our resume. MSt was big because it got us started with SEC wins, though an ugly game. USC was big because it kept momentum going and broke the Muschamp win streak. Kentucky was big because it kept us moving towards bowl eligibility. Miz and Vandy were big because they'd both had their way with us recently, and Miz made us bowl eligible... I felt like we'd beat Vandy because they were just bad, so I'm going with USC and MIZ as a tie for most satisfying because they'd beaten us too much recently... probably USC as top one because I can't stand them, and at the end of the day, I STILL don't consider MIZ as SEC traditional rival.
Likes: MemphisVol77, swampfoxfan, ShreveportVol and 1 other person

SC was easily it for me. We lose that one, and I’m afraid it would’ve been a death spiral.
Likes: MemphisVol77, ArdentVol and vader

For me it was the Kentucky game.... 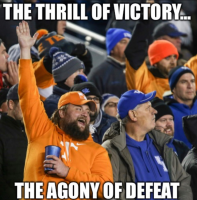 I love kicking the sh%$ out of the Big-10
Click to expand...
Kicking the shi$ out of the Big 10...one point win... Let's put this in perspective; Ohio State beat Indiana by 40 points, on Indiana's home field.
Likes: Dawgoutofwater and USMC-TNVOL

Vol_from_86 said:
South Carolina because Muschamp's dominance of the Vols was getting old.
Click to expand...
Yeah, we had to win that one, because we'd never done it and these streaks have a way of taking on a life of their own. There's really no earthly reason why Muschamp should have a streak over us anyway. So it felt like we re-established some sanity to the world with that win.

The bowl win was also important, because Pruitt proved he can coach us to a postseason victory.
Likes: stephp4ut

It probably won’t make many lists, but honestly beating Miss State in the middle of the gauntlet part of the schedule may have been as important as any. It was no great win, but it showed we at least could play a little.
Likes: jamesthesame, agent|orange, UTwild82 and 8 others

For me it's the Vanderbilt game and the TaxSlayer Bowl win over Indiana
Likes: Shocker0

GAVol said:
It probably won’t make many lists, but honestly beating Miss State in the middle of the gauntlet part of the schedule may have been as important as any. It was no great win, but it showed we at least could play a little.
Click to expand...
It and the Kentucky game.
Likes: BucksnortVol and GoBears

South Carolina. Only real time the team asserted their dominance and it was nice to see Muschumps forehead veins throbbing with frustration
Likes: USMC-TNVOL, mpfvol, MemphisVol77 and 7 others

shut up and just Pruitt

Kentucky, only because my boss is a UK fan and getting to see the look on his face the following Monday when I walked in wearing my orange victory shirt... I was classy though. All is said was " good game, I told you UK sucked, and always will. Hang in there big guy BBall season is almost here. "
Likes: Bret178 and Yanks24

Kentucky because even when the season is just so so or bad, we can always count on that W. SCAR is a real close second and should probably be first. Bituli's stuff on the goal line in the KY game was my favorite play of the year BTW.
Likes: Bret178, MemphisVol77, stephp4ut and 1 other person
J

USCe hands down. That $hit got old in a hurry.

Uscjr, and ky are a tie. It's always satisfies me when we beat my cousins.
Likes: Devo182 and StarRaider

tpsdave said:
Kicking the shi$ out of the Big 10...one point win... Let's put this in perspective; Ohio State beat Indiana by 40 points, on Indiana's home field.
Click to expand...

South Carolina. Simply because Muschamp is an a$$.

Florida. Oh, whoops, you mean last year. I was already responding about next year.
Likes: gnm53108, Wireless1 and alaVOL

tpsdave said:
Kicking the shi$ out of the Big 10...one point win... Let's put this in perspective; Ohio State beat Indiana by 40 points, on Indiana's home field.
Click to expand...
The television folks asked us to keep it entertaining..........

By chance, are you the negative clown who sat next to me and left with 10 minutes remaining on the clock?
Likes: 508mikey, BanditVol, gnm53108 and 4 others
New posts
You must log in or register to reply here.
<< Tennessee Vols Football Forum
Share: Facebook Twitter Email Link