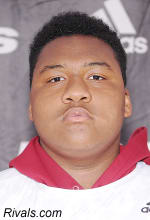 The 6-foot-5, 300-pound St. John said he plans to make the trip to Tennessee with teammate Reggie Love, a four-star Class of 2020 running back who also added an offer from the Vols last week. “We’re for sure going up to Tennessee this weekend,” St. John said. St. John said Tennessee, Auburn, Kansas State, Illinois and Iowa State are the five schools he’s strongly considering at the moment among his dozen offers, and the offer from the Vols “was an exciting one” for him.

“I like Tennessee, actually,” said St. John. "I really like them. I don’t know. It’s the tradition. It’s just all that. “I’m going to be dropping my top eight in the next month or two. They’re going to be in there.” He already has looked up a few videos online that have given him a glimpse of Tennessee’s campus and facilities, and he said he has seen clips from “some of the old games” that have offered a few examples of the Vols’ tradition.

He said he’s exciting to see “how it is down there” at Tennessee, along with “seeing the culture and the tradition and just trying to get to know the coaches and see where I can fit in at.” Tennessee wide receivers coach Tee Martin extended the offer to St. John last week. St. John said he also has been in contact with Vols offensive line coach Will Friend and quality control analyst Kevin O’Brien.

“Tennessee, it’s an ‘O-line U’ down there,” St. John said. "That’s what I know. I’ve been watching them a lot — like, the early enrollees on YouTube and stuff. (Friend) said he’ll put me at guard, but he could play me at tackle because I’ve got good footwork. He was just like, it just all depends on where I feel comfortable at. But I could play anywhere.” “Me and Reggie — well, like, all the 2020 class — we always look out for each other,” St. John said. “I just put them on him, and coach Tee Martin liked him. I just sent them his film, like, ‘We’ve got another dog.’”
Click to expand...
-247
Likes: Pane di mais, kmkemp11, volthruitall and 11 others

Daaaaang this sounds really good for us on both fronts. “We’ve got another dog”. I’m digging it.
Likes: Pane di mais, Tennessee Cowboy and feathersax

Will this trigger another whining episode from MO's Barry Odom?
Likes: SweetasSoda and Bassmaster_Vol

Although Tennessee does not have the natural connections to Trinity Catholic that Illinois does, St. John singled out the Volunteers for the work they have done building a relationship.

“Me and coach (Tee) Martin, we have been clicking for awhile, since he was at USC,” St. John said. “When he got to Tennessee I could just relate to all of them and the love was everywhere. Coach (Jeremy) Pruitt, coach (Will) Friend… they are a good group of men.”

St. John has yet to visit Tennessee’s campus, but expects to make a trip to Knoxville this summer. He is wrapping up a productive spring that saw him earn MVP honors at the St. Louis stop of the Rivals 3 Stripe Camp presented by adidas.
Click to expand...
Rivals

Pruitt and Tee hit this guy up immediately

Bassmaster_Vol said:
Pruitt and Tee hit this guy up immediately
Rivals.com - Floodgates open after Jalen St. John de-commits from Missouri
Click to expand...
While other Missouri recruits in the 2020 class have been told the University plans to have a new head coach in place within two weeks, St. John does not expect to give the Tigers another look. “I am just going to go ahead and look for another place,” St. John said. “With the whole coaching staff being gone it’s just a lot, because I connected with them real well.” St. John had nearly 20 scholarship offers when he announced his commitment to Missouri this past July. Upon re-opening his recruitment, many of those schools immediately reconnected with the four-star lineman. “Now that I have opened my recruitment back up, there are a lot of schools contacting me,” St. John said.
Click to expand...
“I talked to coach J.B. Grimes today from Auburn. I talked to (Tennessee’s) coach Pruitt on Thanksgiving and I talked to coach (Tee) Martin today. I talked to Mississippi State today.” Other schools that have been in contact with St. John since he announced his de-commitment are Penn State, Arizona State and Minnesota and expects visits from Arizona State and Indiana coach William Inge at his school this week. St. John plans to utilize each of his four remaining official visits before making his college decision. “I am really just taking my time with it and re-thinking a lot of things,” St. John said. “I am really trying to come in and play, but if it doesn’t happen it doesn’t happen. I’m (looking) for a place I can go and be good, where my family doesn’t have to worry about me. I’m just ready to get this journey started, honestly.” St. John has not ruled out making an official visit this upcoming weekend if an opportunity arises this week. He will take his recruitment into January, though, and sign in the late period.
Click to expand...
-Rivals
Likes: PA Vol, Scvol7906, Ron Swanson and 2 others

I think this dude starts seeing orange soon. Coaches on him.

can we fit another OL into the class?
Likes: TNHopeful505

bignewt said:
can we fit another OL into the class?
Click to expand...
That's what I was wondering. I didn't think we were going to try to get another, UNLESS we see one of the currents playing on defense. I was thinking the only other one we were looking at was Reginald Perry.
I mean, by all means, we need OL, especially with Ryan Johnson leaving, and possibly Trey leaving.

I really am not sure how the numbers are going to work. But I'm sure the staff will figure it out. As I posted in another thread, it really seems like they're just targeting the biggest, fastest, meanest players, and are figuring out the positions later.

And also.....with him looking around, does that mean Reggie Love is too? The earlier quotes talked about us wanting both of them. Wonder if that's the case?

Just heard from St. Louis 4-star OL Jalen St. John that he has scheduled an official visit with Tennessee for the weekend of Jan. 24. St. John decommitted from Missouri last week after they fired their head coach and declared at that time he would bypass the early signing period. He did not officially visit anywhere this past weekend, and does not have any official visits scheduled for this upcoming weekend.

The other official visit St. John has scheduled in January is Mississippi State Jan. 17. He has two more official visits available to him if he wants. Auburn, Indiana, Penn State, Arizona State and Minnesota are some of the schools trying to get him on campus next month.
Click to expand...
- Josh Helmholdt, Rivals
Likes: MoB_MoVols, PEPPERJAX, dmwhite1 and 9 others

Pruitt recruiting like we have unlimited spots. LOVE IT!!!!!! No stone unturned....
Likes: SugarCC, almirUT, SweetasSoda and 2 others

xtremevolfan said:
Pruitt recruiting like we have unlimited spots. LOVE IT!!!!!! No stone unturned....
Click to expand...
They never stop
Likes: SugarCC, MarcoVol, WestTnVFL971 and 2 others

He’ll need to jump in the boat if he wants a spot. Will need at least a year to condition to SEC play.

If he visits and we’ll play hard ball. If not, his spot will go elsewhere.
Likes: jakez4ut, Sleegro and SweetasSoda

Bassmaster_Vol said:
They never stop
Click to expand...
Member when atl said coaches were hitting the trail like never before and everyone panicked like that was a bad thing. I member.
Likes: sonofUT62, SugarCC, MarcoVol and 3 others

This kid is a monster. Interior O-line about to be shored up for a long time
New posts
You must log in or register to reply here.
<< Tennessee Vols Recruiting Forum
Share: Facebook Twitter Email Link