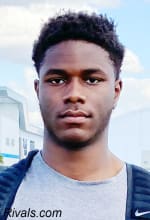 Okunlola? I don't even know her!

Just noticed big Samson is his younger brother for the 23' class.
Likes: Maxwell865, InVOLuntary, VOLINVONORE and 2 others

"It was exciting to receive the offer. I'm very grateful," said Okunlola, who's ranked the No. 539 overall prospect and No. 36 strongside defensive end in the 2022 class, according to the industry-generated 247Sports Composite. "I look forward to building a relationship and learning more about Tennessee."

The 6-foot-4, 225-pound Okunlola, who has piled up offers from more than 40 schools, said the Vols indicated that they envision using him as an edge rusher who could line up at defensive end or outside linebacker in new defensive coordinator Tim Banks' system.

"They like my ability to get to the quarterback and stop the run," Okunlola said. "I also have versatility in my game. I can play in space and drop back into coverage."

While he's still learning more about Tennessee's program, he said he likes that the Vols are "in the SEC, one of the most competitive leagues in college football." He said it's too early to say what he thinks of Tennessee or where the Vols might stand among the dozens of schools pursuing him, but he's already planning to take a closer look at the Vols in the near future.

"I have a virtual visit planned with Tennessee next week, where I will meet some of the staff," he said, "and I’ll go from there."
Click to expand...
-Callahan
Likes: T Dog, SmokeyDaBear, volthruitall and 6 others
New posts
You must log in or register to reply here.
<< Tennessee Vols Recruiting Forum
Share: Facebook Twitter Email Link