BigOrangeTrain said:
Going after them Brandon Browner type. I like it.
Click to expand...
Hopefully without the cocaine and attempted murder
Likes: Megatron88, Smokey19rt and allvolrecruiting

After getting his offer from Tennessee more than three weeks ago, Perry said the Vols were “definitely” one of the top teams he was considering among his dozen offers and added that he expected to visit them again.

“They’re a huge school and one I’m really looking forward to considering,” he said at the time. “It just makes me want to work harder and just be able to improve each day and everything like that. This is just the beginning, just as with all the other offers, as well.

Perry said the offer from Tennessee “was definitely a surprise” despite the attention the Vols' coaches showed him during the camp.

He said Tennessee defensive line analyst Levorn Harbin contacted him “about two weeks” before the camp and made it clear that the Vols were interested in him. But he didn’t know what would come of it when he made the trip to Knoxville.

“(Harbin) was like, ‘I really love your film and everything’ — he’s called ‘Coach Chop’ here — and he wanted to get me up here at the camp and everything, see what I can do. So I came up here and just tried to show out and do my best,” Perry told GoVols247 on June 1.

“I went out there and they really liked how I moved and everything like that. I had an idea (Tennessee might offer), but sometimes you don’t want to hope for something and then it not happen.”
Click to expand...
-Callahan
Likes: I4Vols, Woodlawn VOL, allvolrecruiting and 3 others

From saftey to DL and everything in-between is pretty versatile. Lol

T Dog said:
From saftey to DL and everything in-between is pretty versatile. Lol
Click to expand...
Like they’re creating a position for him.

bigl3327 said:
Javon Kearse fit that mold.
Click to expand...
Man if he can turn into a freak show, sign him up for real. 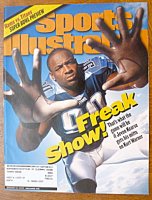 Perry visited for camp a few weeks back and the Georgetown, Kentucky native has remained in constant contact with the defensive staff. Things have been trending there for the last little bit.

“I’m not going to say it’s tough, really. I mean, it’s nice to gain another offer,” said Perry, who’s ranked the No. 80 linebacker in the 2022 class and the No. 7 rising senior from the state of Kentucky, according to the industry-generated 247Sports Composite.

“It’s just going to (depend on) how I feel with everything academically and football-wise, and it’s just another opportunity. I want to get as many opportunities as I can, so I’m just going to take my time and see.”

Perry said he has lived in Kentucky for “about nine years, 10 years.” But he’s originally from South Carolina and grew up liking the home-state Gamecocks.

Still, he said he’s intrigued by the Wildcats, at least in part because of their recent history of producing NFL players on defense.

“I would say, with the position — linebacker, hybrid — they put some of the top linebackers in the NFL, two of them being first-round — or maybe three, actually,” Perry said, referring to former Kentucky stars Josh Allen, Bud Dupree and Jamin Davis.

“They know what they’re doing at linebacker and everything, so that’s definitely one big factor for them, as well. They’re really good defensively.
“I don’t know. I’m just going to get to learn as much as I can, question them and take my time with it.”

But Perry also holds Tennessee in high regard. He has been to Knoxville multiple times in the past, including his visit June 1 for the Vols’ camp, and he’s looking forward to learning more about the program this weekend.

Maxwell865 said:
-Callahan
Click to expand...
Did someone say playing football and engineering?

“I had a really good time and enjoyed my visit,” Perry told Volquest. “Just being able to see the coaches and the privilege of being able to hang around them and see what they stand for and who they are as a person was really nice and super good.

“I loved being able to meet with some of the players on the team and hangout with them. They took me around and showed me the city. It was a really nice weekend.”

Perry’s parents accompanied the 6-foot-3, 215 lbs. linebacker for his return to Knoxville. They enjoyed the trip as much as Perry.

“All of these schools have big facilities and what not, but really it’s going to come down to how they feel about the coaches and they enjoyed the coaches,” Perry said. “They got to spend some time with them and they also wanted to see what they stand for.”

Being able to sit and talk with the coaches is what stood out on his official visit by far.

“I really enjoyed getting to talk to Coach Heupel and get to know everything he’s about and everything he values,” Perry said. “His background, his culture, what he stands for, everything. He’s looking for the next generation of Tennessee football and I think he’s doing a great job of changing the culture.”

Kentucky recently offered the in-state product after Perry camped with the Wildcats on June 23.

“I want to make sure I take as much time learning about them as much as I can, as well as culturally with how they stand,” Perry said. “I’m thinking sometime in July is when I want to make a decision. Maybe middle to the end of July at the latest.”
Click to expand...
- VQ
Likes: I4Vols, Samthebam, F0Rt_V0L and 3 others

“The coaches were very welcoming, of course, and I had a good time overall. I got to learn a lot about Tennessee, so I just had a really good time.”

“I would definitely say just learning the experience about the coaches in the past — the new staff and everything — so that was one big thing (that stood out),” said Perry, who has received offers from more than a dozen schools.

“And I was really impressed with the academic support, of course, and then I know they’re getting a new engineering building being built, as well, so I was really impressed overall. But, mainly, (I liked) just getting to know the coaches’ back history and hearing about Coach Heupel’s success at other schools, like UCF and everything.”

“He’d be my position coach coming in, so he wanted to spend as much time as he could with me. He spent all of it, actually, with me,” Perry said of Jean-Mary. “We got to know each other, and he sat us down in his office. We were only supposed to be in there for around an hour, but we were in there about two hours.

“We just went over film, stuff that he likes to do with his linebackers, things that he looks for and what’s going to allow you a chance to get experience and time to play. He just talked to us about that, mainly, and it was very informing and very good to hear.”

“He compared some of my film with his and everything, with the edge-rushing and being able to cover in space,” Perry said, referring to Parsons. “He was 6-3 and, like, 235, ran, like, a 4.4(-second 40-yard dash). (Banks) was just comparing me to him, trying to show things that he likes to do with his linebackers. It was pretty fun.”

Perry, who picked up an offer from nearby Kentucky last week with a strong showing at one of the Wildcats’ camps, said Heupel’s staff as a whole again made a strong impression on him during his official visit to Tennessee.

“They’re really nice,” Perry said. “I think Coach Heupel has a good culture behind him in what he’s doing leading Tennessee, after what happened with them before. I definitely think he’s going to lead the program in the right direction, so I’m excited to watch what he’s going to do.”
Click to expand...
-Callahan
Likes: LittleVol, HoleInTheRoof, VolByLaw and 2 others

Purdue or Kentucky for him is what I am hearing. May get an offer from Michigan soon also, my sister goes to high school with him.

Looks like he eliminated KY according to RC, wants to study engineering - so Purdue is very attractive to him. I didn’t realize he’s originally from SC
Likes: I4Vols, allvolrecruiting, Smokey19rt and 2 others

Maxwell865 said:
-Callahan
Click to expand...
“I’m excited to watch what he’s going to do.”
not a Vol

“
I think there’s a pretty good chance that’s how it ends up going. Cincinnati has been after him for a long time, though — that was his second offer — and academics are a big deal to Perry, who wants to study engineering, so Purdue is also tempting to him. He’s the type of kid who could maybe surprise people by not just going to the biggest football program among his finalists.

But I do think Tennessee has positioned itself pretty well to this point, and right now I would probably lean a little bit toward the Vols being the favorites.”