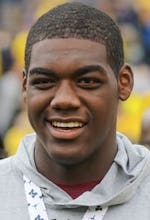 “Tennessee is really cool, and all of their facilities and supporters are top-notch,” said Craig. “I loved it.” Craig said he “hadn’t been down there before, so when we considered the idea of taking an official, it was a no-brainer.” It was a particularly easy sell because the Vols, led by quarterbacks coach Chris Weinke, have made him a priority since they gave him one of his first scholarship offers in August. “They were one of the first schools to contact me, so I felt it was only right that I got down there,” he said, adding that Tennessee’s coaches “probably hit me up the most right now.”

He said he spoke with Chris Rumph, the Vols’ co-defensive coordinator and outside linebackers coach, along with Weinke and new defensive coordinator Derrick Ansley. All of them, along with second-year Tennessee head coach Jeremy Pruitt, told Craig that he could make an “early impact,” he said, on the Vols’ defense. “They were all just telling me that they think I can have a big impact on the turnaround of their program,” Craig said. “They’ve got the place in a good spot right now and need other guys like me that can bring them back to the top. “I would play (outside linebacker) because of my athletic ability. And they said they would expect me to have an early impact.”

One of the surprises of Craig’s visit was the time he spent looking into Tennessee’s basketball program. He said he “was able to get a basketball facility tour, as well.” He said he “got to walk around” with Vols assistant coach Michael Schwartz, “and we went into the main arena and we had a great conversation.” Craig said he’s interested in playing both football and basketball in college, although he’s not sure yet whether he plans to try it.

“They said that they would want me to explore the opportunity of trying to do both,” he said. “It definitely means a lot that they want me to try and do both, but it’s not something that I have set in stone just yet.” He came away viewing Tennessee as one of his current favorites. “I hope to get down there again soon,” Craig said. “They are toward the top. I’m hoping to get my list cut to about six or seven by the start of next week.”
Click to expand...
-247
Likes: GoVolsDR, quadlee21, wwilso29 and 3 others

Ron Swanson said:
-247
Click to expand...
Really like that he got to talk and tour with Schwartz from basketball as well. Sounds like he genuinely enjoyed the trip.

I was standing next to him on a Saturday (jotting names down as I saw them), and what stuck out to me was how big he is (I think he’s heavier then his 230 listing) but how well he carries his weight. Definitely going to be able to play at 260-270 range IMO.

I saw several prospects, but this is one kid that stuck out to me as a different level athlete.
Likes: T Dog

Just like a year ago, Tennessee will likely make the most headlines with its 2020 class in May and June.

Coming out of a huge recruiting weekend, the Vols only helped themselves with official visitors Mays, Rogers, Crawford and Indiana pass rusher Deontae Craig. It’s notable that while Tennessee continues to recruit 5-star in-state linebacker Reggie Grimes, the Vols hold Craig, who is also high on Notre Dame and Michigan, in just as high esteem.
Click to expand...
- VQ
Likes: HoleInTheRoof, TrueVolsGBOInsider, wwilso29 and 5 others

Decade of the Vols

This kid is excellent at diagnosing where the play is going and his quickness/acceleration are elite.

This is the kind of athlete we are missing on the line. Taylor is the closest athletically but this kid will be a lot bigger.

HoleInTheRoof said:
Click to expand...
I think if he doesn’t come here he’ll end up in the big ten
Likes: UTSuave’, So.ProVOL, ChismsHeadband and 12 others

VOLUNTEERSZN said:
I think if he doesn’t come here he’ll end up in the big ten
Click to expand...
How you figure
Likes: Vol Main, Shomesumluv, bignewt and 3 others

Speaking of pass rushers, Indiana OLB Deontae Craig continues to hold Tennessee in high regard. Craig, who took his official visit here for the O&W Game, released his Top 8 schools this week. This is shaping up to be a Michigan, Notre Dame and UT battle, with Iowa in the mix, too. Tennessee hopes to get Craig back on campus this summer. The one thing the Vols have going for them here is they were the first Power 5 school to extend the pass rusher a scholarship.
Click to expand...
VQ
Likes: quadlee21, GoVolsDR, VOLuptuousBOOMS and 6 others

“Just the atmosphere up there,” Craig said. “People talk about SEC football being different. You never really know till you see it. It was the best visit I have been on. Seeing how many turned out for a practice and the energy in the town stands out.”

The Vols also continue to stand out because of how bit of a priority they have made the 6-3, 225-pound defensive end.

Tennessee contacts me the most,” Craig said. “Taking the official was really good. It was my first time there. Right now, I am thinking about them a lot.

“They were the first school to offer me. Ever since then we have texted every day. We talk on the phone a lot. They have made it clear that I am a priority for them. Coach Weinke has been up to the school.”

“I just cut my list,” said Craig who tweeted that he was focusing on Tennessee, Michigan, Michigan State, Ohio State, Indiana, Iowa, Northwestern and Purdue. “I’m thinking about some schools more seriously. I will take a couple more officials this summer. I would like to make a decision late in the summer or early in the fall.
Click to expand...
- VQ
Likes: FïreBall, quadlee21, T Dog and 4 others

Hope we didn't peak too soon.

Sounds like Vols have a great shot here.
Likes: SweetasSoda and HoleInTheRoof

Ron Swanson said:
Sounds like Vols have a great shot here.
Click to expand...
I don't think I realized we were his first offer. That's awesome.

Really think he's a Vol when its all said and done.
Likes: FïreBall
I

Anyone know where this kid is from? Culver is a boarding school. I suppose his family could live in the town but I doubt it.

illinoisvolfan1 said:
Anyone know where this kid is from? Culver is a boarding school. I suppose his family could live in the town but I doubt it.
Click to expand...
Hometown Shows Culver, IN

i kid i kid

Austin Price was on Swain's show this morning and said he feels Vols are the leader here, but both Notre Dame and Michigan are teams to watch and could cause problems.
Likes: T Dog, Bring_Back_Dooley and SweetasSoda
I