If Vols dropped football what team would you follow?

GulfCoasterVol said:
If the they dropped football... hummmmm.

Since football is already becoming so dumbed down with the advent of so many new and crazy rules...... Most likely switch to rugby - New Zealand All Blacks (uniform color not racist) and or the British & Irish Lions.

and hockey - Predators and Blackhawks

another good question could be.... what kind of useful facility could Neyland be converted too??
Click to expand...
Hung out with John Rutherford (Scottish halfback for the UK lions) for a few days back in 2010 on the Isle of Mull.
Likes: GulfCoasterVol and Border Vol

Probably Aggie or SMU since I live in Texas now. I would likely follow Colorado too since I wouldn’t mind retiring there. And why not throw in Austin Peay and MTSU for fun.
Last edited: Sunday at 5:03 PM
Likes: Border Vol

That's where I'm going if the Vols were ever to, God forbid, fold up shop.
O

IndianaVol said:
I would quit watching or following football.
It's like asking if Popeye's dropped the chicken sandwich...why go if you can't have the sandwich ???
Click to expand...
Because the chicken taste good.

Unless something really screwed up beyond our imagination comes around, not happening. But since you asked, under the current landscape of college football? Nobody. Hell, every time a targeting penalty is called, I change the channel. And that includes the Vols. My entire family and friends now know all too well not to utter that word in my presence. As to the jerk who coined the term, I wish upon him death, pain and misery, and in any order God or karma delivers it upon him. And as the referee puts his fist to his head, I want him to follow through hard with a skull shattering blow. As to the fans who cheer it? I hope the stadium collapses upon them.

So, until that absurd nonsense of a rule goes away, I will still follow the Vols as best I can stand to. I get my main sports fix from hockey, aussie rules football, the occasional baseball game, and the NFL when they don't wear goofy looking uniforms Which is proving to be way more common than I would like. Thanks, Nike.
Likes: Border Vol

That's where I'm going if the Vols were ever to, God forbid, fold up shop.
Click to expand...
Actually, that is, at last report, the Legends Football league. Need to get me some KK Metheny posters.
Likes: VFL-82-JP

SpaceCoastVol said:
Is it karma that Alvinkamara was the first like of your post?
Click to expand...
Doubt it is the real one, but who knows? The karma of Kamara? Is he a car or our bringer of poetic justice? Guess we will know someday. Likable guy though.

PS. Wouldn't mind being an LSU fan. Lived in that area for 8 years. Geaux tigers!
Click to expand...
TOTALLY agree !!!
I would still go if they dropped the sandwich because the chicken is that good.

As far as my analogy, I would likely still watch college football as a sports fan.
But the question was posed what team would you follow and I wouldn't follow a specific team just like going to Popeye's...I wouldn't get a particular item but sample from the entire menu.

You could always root for the the X League in Japan 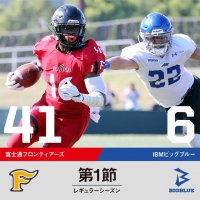 No one till the product is improved. I barely watch any college football other than the Vols. I used to be a junky.

Border Vol said:
You could always root for the the X League in Japan

mad4vols said:
Lol, saw there was a team called Osaka Gas Skunks 🤣😂🤣
Click to expand...
I like the name Tokyo Gas Creators

I would probably just quit watching. I'm almost there now. Seeing FLA beat us over and over again and Bama winning championships every other year has sucked all fun out of it. Add in UGA now owns us and it is downright difficult to find any joy.

I used to believe every year there would be some miracle or surprise to make the wait worth it. I'm slowly coming to the conclusion there will be no surprise or miracle. There is no wait, it is now just voluntary torture. My teens through my 20's was one of the greatest period in UT football history, so it makes now that much worse.

I'll take one of the home teams. Probably Stanford over Cal-Berkeley
J

LSU. My grandparents were from Louisiana. My grandmother had a scholarship there
C