Nute Gunray said:
Check out this article: Why the skyhook isn't a part of today's game
Click to expand...
It could be.

I started getting serious in basketball during my stint in the army. The 1981 Lakers team was my first pro team of choice (bc of Jamal Wilkes, Michael Cooper, Magic Johnson, and Kareem) and the Lady Vols were my first college choice...bc of Pat Summitt.
It is not a difficult shot to teach and like the article I marvel at "why not"

It's avoided primarily because he shot it much different from the "accepted" George Mikan hook ... GM would use the full arcing swing of his arm in the hook shot in a 180 degree swing of the ball,,,where, Kareem would take the ball from his hip, shove as straight upward, lift his carry-knee and flick the ball with a "shooting a paperwad" release. No gooseneck whatsoever.
People are slow to accept differences and the shot is/was excused as a shot unique to Kareem.

I can teach it and have. I have studied the pre-footwork to set up the shot, the mechanics of the transition of the ball, the release point and the unique follow. I'd love to have a shot at teaching it to someone like TK
G

The girls on my old high school’s teams back in the early 70’s all could shoot hook shots with either hand. And hit their FT’s. Just takes someone teaching them how.

VA_VOLFAN said:
I ran college for division 1 and the elite athletes there also had issues even with us having both nutritionists and sports psychologists. There was nothing average about them.

I do wonder what’s up with her conditioning... I am glad we have a post with a wider body to bang with some of the other posts we will run up against (Johnson from A&M, Boston from SC, Knight from Alabama, Fasoula (sp ?) from Vandy... Key will have to gain some strength and muscle but looks like she is just meant to be leaner... I am interested to see what KK and McCoy look like after a year with Kellie Harper and her conditioning.

I remember last year KK looked good coming into the season then had a foot injury and never really got back on track til UCLA game.
Click to expand...
In the off season Key will get to work on her strength also i`m sure work with other former post players. Mark it down next season Key 6-7 will be a force. As for KK and McCoy i agree conditioning conditioning.
V

djtee said:
In the off season Key will get to work on her strength also i`m sure work with other former post players. Mark it down next season Key 6-7 will be a force. As for KK and McCoy i agree conditioning conditioning.
Click to expand...
I can’t wait to see her next season. I think she has a frame that she can pack some muscle on. I want to see 6’6” coming back next year with Glory Johnson arms lol.

Tennessee Rpi 82 games left with teams with a higher rpi 9.

An amazing stat to me is that this season Tennessee is averaging 75 ppg and allowing 55 a game. A year ago it was scoring 75 ppg and allowing 69 a game. So a minus fourteen in the allow category. Last year team had 95 blocks for the entire season and have 111 already this season. We averaged 14.2 assists last season were averaging 18.3 this season. Turnovers 15.9 a game last season this season 16.7, Turnover to assist ratio last season 0.89 to 1 and this season 1.10 to 1. Were shooting .454 this season .430 for all of last season we'll see how that goes. Record after 12 games was 12 and 4 last season 13 and 3 this season and last season the next three games were losses to fall to 12 and 7 hopefully our 19 game total is at least 15 and 4 which would give us a plus three win season after 19 games. From 12 and 7 last years team finished 7 and 6 so we have a great chance to better last year by 5 games or more only time will tell what happens. Is this years team better personnel wise than last year well we have Key, Horston, Brown, Rennie, McCoy, and Saunders and are missing Jackson, Collins, Westbrook, and Green.
Likes: MagnoliaVol

VolBall09 said:
I can’t wait to see her next season. I think she has a frame that she can pack some muscle on. I want to see 6’6” coming back next year with Glory Johnson arms lol.
Click to expand...
Maria M. Cornelius 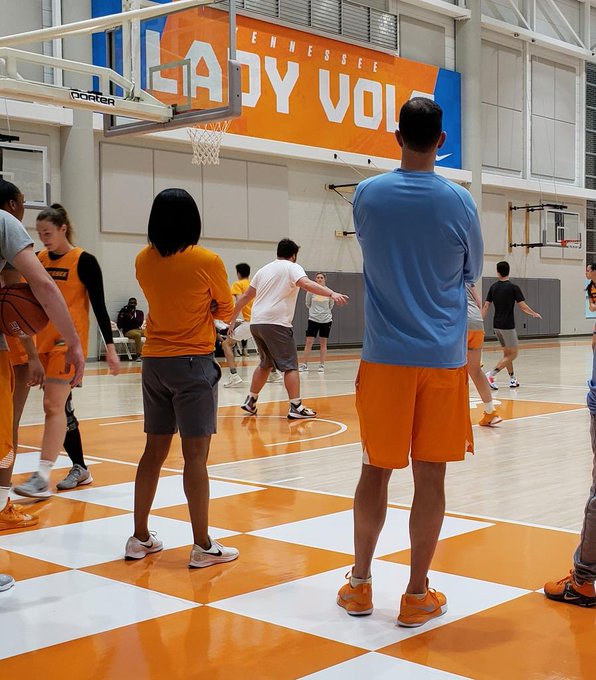 Click to expand...
Carolyn Peck kept saying she was 6’4” last night and it was annoying. She was being guarded by 6’4” Staiti and she definitely had a good couple inches on her.
Likes: mlindsay and djtee
L

VolBall09 said:
I can’t wait to see her next season. I think she has a frame that she can pack some muscle on. I want to see 6’6” coming back next year with Glory Johnson arms lol.
Click to expand...
Yes, build the arm strength! And if only she’d been blessed with the same percentage of fast-twitch muscle fibers as Glory, she’d be WNBA-ready next season and probably win ROY.
Likes: krichunaka and VolBall09
C

I can't wait to see her working in practice daily against lil' sis.
Likes: krichunaka, Nute Gunray, djtee and 2 others
D

Coach Jumper said:
or
the way we've made them look
Click to expand...
No, they're legitimately not very good...

Darth_Vol said:
No, they're legitimately not very good...
Click to expand...
The optimist sees the donut
the pessimist sees he hole
D

Coach Jumper said:
The optimist sees the donut
the pessimist sees he hole
Click to expand...
I'm definitely looking at a hole...

Coach Jumper said:
The optimist sees the donut
the pessimist sees he hole
Click to expand...
The realist sees both.
Likes: Darth_Vol

"Beat me! Beat me!" cried the masochist.

Creekdog said:
The realist sees both.
Click to expand...
Or the realist can look at the bottom of the SEC standings...

creekdipper said:
"Beat me! Beat me!" cried the masochist.

"No! No!" replied the sadist.
Click to expand...
what did the happyist say?
Likes: creekdipper
L

Nute Gunray said:
Check out this article: Why the skyhook isn't a part of today's game
Click to expand...
I honestly think the biggest reason the hook shot isn’t part of today’s game is because it looks kinda goofy. Silly reason, I know, but I believe that. It’s a shame, too, because a post with a height advantage coupled with a particularly wide wingspan can be absolutely unstoppable if that player develops a good hook shot and knows when to use it.

I would love to see Tamari and Emily light it up with a hook shot!

Nute Gunray said:
Check out this article: Why the skyhook isn't a part of today's game
Click to expand...
I grew up watching Kareem, in his prime with the lakers (well maybe his prime came with the Bucks but I missed that era).

But it was an absolutely unstoppable shot for Kareem,

Even before 3 pointers and posterizing dunks, Kareem was about the only player using it. If anyone remembers Bill Cowan who played centered for the Celtics in the same general era, he had a jump hook, which is related but not quite the same.

I think the jump hook would be a little easier to master.

Kareem's shot was amazing because he had good elevation of the one leg, exceptional balance, and very long arms. I am pretty sure the height of his release was above the basket.

I think a player like Key could develop a jump hook that would be very effective. The skyhook might be more complicated (and challenging) than needed.

Before that, I would be happy is she and the other post can consistently finish shots right at the rim. Key is getting better
Likes: krichunaka and lvocd
K

georgia is prolly one star player away from being a really good team. there was a point there in the second quarter where tennessee was missing shots and turning the ball over, but the dawgs really didnt advantage and tennessee was able to make a couple timely 3 point shots and take a nice momentum turning lead into halftime