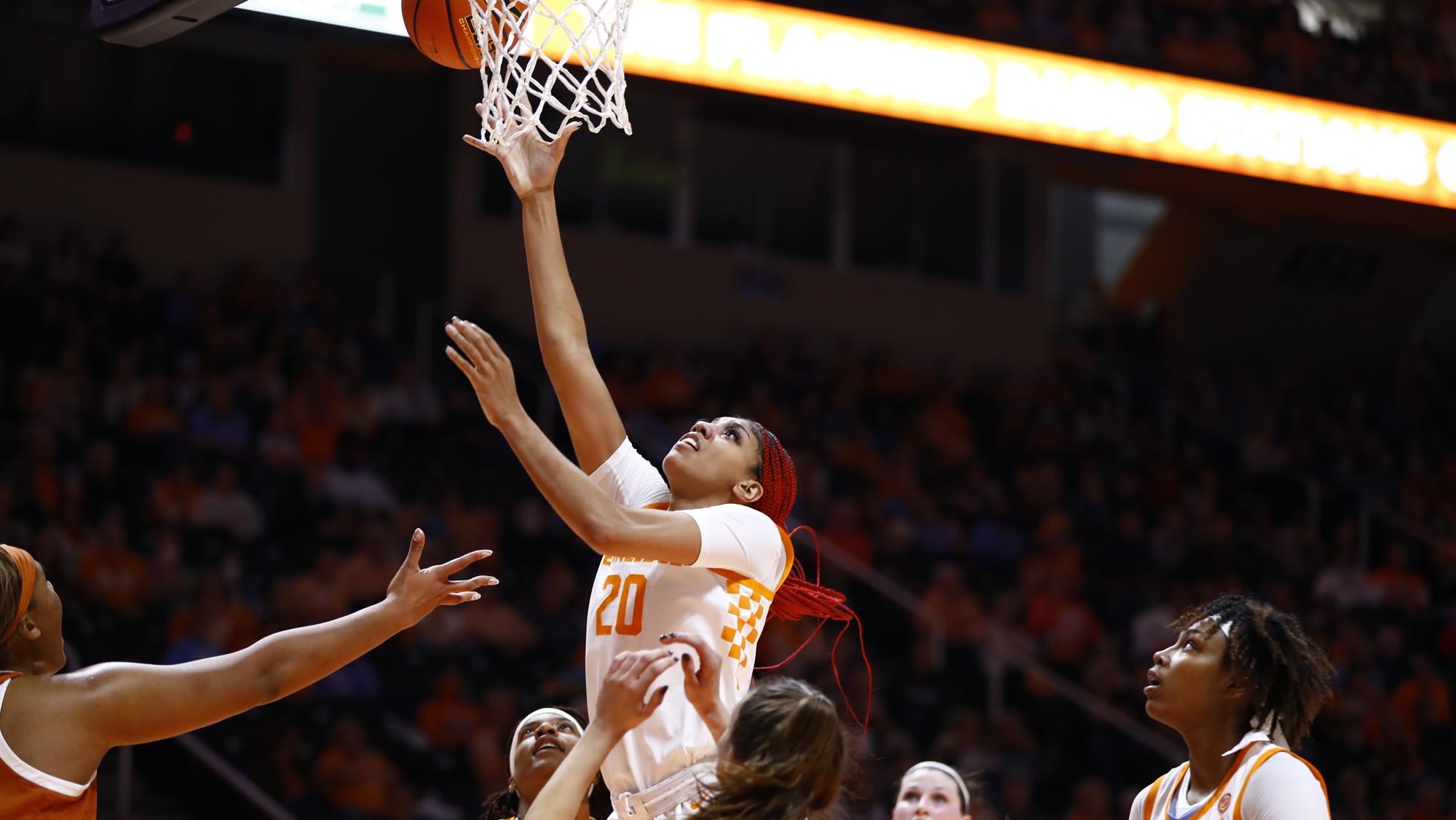 Tennessee has held each of its opponents this season to under 40 percent shooting. Three were held to under 32 percent. The Lady Vols have only allowed 16 teams to shoot better than 40 percent in the 60 games during the Harper era. Tennessee has also won the battle of the boards in 50 of 60 contests.
Last edited: Nov 24, 2021
Likes: fastvol7, 87&91ALUM, Bret178 and 8 others
V

look out! Kansas has a girl on their team that almost singlehandedly beat Tn a couple years ago @ETSU
Likes: LadyVols_WBK

gule said:
look out! Kansas has a girl on their team that almost singlehandedly beat Tn a couple years ago @ETSU
Click to expand...
Yes I remember her lol 😂
T

LadyVols_WBK said:
Yes I remember her lol 😂
Click to expand...
Who was this?? 🤣

Tennessee12 said:
Who was this?? 🤣
Click to expand...
Erica Haynes-Overton had 41 points and 10 Reb against TN in Kellie Harper 1st game vs ETSU she transferred to Kansas
Likes: NoBackBoard

EHO is at Kansas? She has to be older than Fulky
Likes: HeadVol77, Rickster and LadyVols_WBK

So what's this flohoops cost?
L

volroadwarrior said:
FloHoops---wtf?
Click to expand...
I hate it! Maryland plays two top 10 games this week and neither is on TV either! It’s a travesty they make people pay to watch these tournaments through an online service, ESPECIALLY if they’re big games…………but I’m going to pay though! 🥴🙄😂
Likes: mcannon1
L

LadyVol1908 said:
$29.99
Click to expand...
ballertv, nfhs, and several drive by's for tourneys,,,man I sure appreciate the streamed/televised games much more now. Alll these drive-by streaming networks I have to pay for gets old fast
Likes: LadyVol1908
D

LadyVols_WBK said:
Erica Haynes-Overton had 41 points and 10 Reb against TN in Kellie Harper 1st game vs ETSU she transferred to Kansas
Click to expand...
She’s only played 5 minutes this season… unless they’re just going to try and unleash her within an offense they obviously don’t think she understands.. I think we’re fine on that end
Likes: HeadVol77 and LadyVols_WBK

dapeak said:
She’s only played 5 minutes this season… unless they’re just going to try and unleash her within an offense they obviously don’t think she understands.. I think we’re fine on that end
Click to expand...
besides, we didn't have Beamer then
Likes: dapeak
D

Coach Jumper said:
besides, we didn't have Beamer then
Click to expand...
Right.. I’m not concerned about her. I’m looking at the matchup with Lee and Key
Likes: Coach Jumper
L

If the KU coach doesn't put the game into the hands of Erica Haynes-Overton, a player who absolutely owned Tennessee last time she met them and so would likely, rightly, feel some confidence based on that, then I don't know about that coach.

I don't care if she has only played in 2 games for a total of 5:46, I look for her to counted on to be the Lady Vol killer for KU. I'm guessing the only way that won't be the case is if we find out the reason she hasn't been playing is because she has a lingering, debilitating injury. We have no idea why she hasn't been playing. Could be she had an illness and has just recently started working herself back into game shape. There is just NO WAY that roster has that many players more capable of scoring than EHO is.

I guarantee you Kellie isn't saying she's not concerned about EHO!
D

dapeak said:
Right.. I’m not concerned about her. I’m looking at the matchup with Lee and Key
Click to expand...
Doesn't Lee play for Kansas State? We are playing Kansas University.
Likes: xtpsrh08123 and dapeak
D

37620VOL said:
EHO is at Kansas? She has to be older than Fulky
Click to expand...
She is, not playing much at the moment though. Working back from an ACL still.
Likes: 37620VOL
V

One never hears about the Kansas women's basketball team so I checked them out with some mixed information. They were picked last in the Big 12 preseason polls, but have beaten all the mediocre teams they have played so far by big margins. Perhaps this accounts for their surprisingly high #29 ranking in the AMSTS computer rankings. On the other hand, the AMSTS seem really suspect as they had the Lady Vols move down from 8th to 11th, which makes no sense at all. Also, for those who aren't following the Lady Vols opponent results closely, the South Florida win in which we seemed to play so poorly now looks like an extremely impressive win. Not only did USF almost beat UCONN, they upset a then top 10 (I believe) Oregon team. This will be rewards come NCAA tourney seeding time.
Likes: LadyVols_WBK
M

mudcat1973 said:
12.49 monthly chose your sport wed site says
Click to expand...
Hearing you take the 12.49 and they charge you for an entire year. If you take the monthly 29.99 just one month.
Likes: LadyVol1908, LadyVols_WBK and mudcat1973
New posts
You must log in or register to reply here.
<< Tennessee Lady Vols Forum
Share: Facebook Twitter Email Link