SweetasSoda said:
Vols offer 7/15/20?
Click to expand...
Why don't I get to play with the time machine too? This seems unfair!
Likes: MoB_MoVols, ChiTownVol, VOLSONLY and 4 others 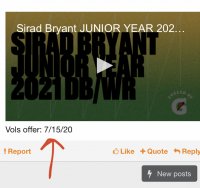 Sirad Bryant of Cordele, Ga. picked up an offer from Tennessee joining fellow Crisp County High School teammate Christopher Paul, who also was offered by assistant coach Shelton Felton days ago. “I was on Twitter retweeting Pooh’s [Christopher Paul] tweet when coach Felton called me,” Bryant told Volquest. “I thought he was just checking in because that’s usually what he calls to do. I’ve been talking to Tennessee for a while and they haven’t offered yet. “But then he offered me.”
Click to expand...
“Tennessee says I have great ball skills and say I react better than most when the ball is in the air,” Bryant said. “They say I have great play recognition and want someone like me to be a hybrid on the back end.” The 6-foot-1, 185-pound defensive back has accumulated more than 15 offers to date and previously released a top-five on June 7 consisting of Ole Miss, Georgia Tech, USF, Kansas and Nebraska. Bryant did note, however, that his recruiting is still 100 percent open. “He knew I had already announced a top-five, but he said that was just my ‘corona top-five,’” Bryant said of Felton.
Click to expand...
“I’m wanting to find a staff that really cares for me and keeps in touch,” Bryant said of a potential suitor. “I want to be treated like family wherever I go.” With the recent offer, Tennessee could be a team to watch. “Christopher and I were just talking about it – the city is terrific,” Bryant concluded. “We both went there a few years ago and everything was just perfect. “It felt great and calm, like my hometown.”
Click to expand...
-Vq
Likes: FïreBall, wwilso29, berryvol and 9 others

Nice player. Great instincts. Exceptional actually, but he can't be any better than 4.7 40...

Better instincts than Wilcoxson but not the same level of athlete. And i wasn't crazy about him either.

Kid must be a fallback option.

Gave another interview a while back that isn't behind a paywall.
Bryant "Loves Tennessee," Says Pruitt "Actually Cares" | Rocky Top Insider
Likes: FïreBall, VOLSONLY and SweetasSoda

LittleVol said:
Nice player. Great instincts. Exceptional actually, but he can't be any better than 4.7 40...

Better instincts than Wilcoxson but not the same level of athlete. And i wasn't crazy about him either.

Kid must be a fallback option.
Click to expand...
Probably hasn't been timed in awhile. Physical tools and instincts could make him surge in the rankings late.