What is he 8th gade at that size?

One of the nation's top offensive linemen in the 2024 class is ready to take his first look at Tennessee. Five-star offensive lineman Daniel Calhoun, a rising junior at Centennial High School in Roswell, Ga., told 247Sports' Blake Alderman that he's scheduled to visit the Vols this weekend.

The 6-foot-6, 350-pound Calhoun told GoVols247 that he doesn't know exactly when he will be at Tennessee this weekend, but he "probably" will be in attendance Sunday to participate in one of the Vols' camps. Former Tennessee coach Jeremy Pruitt's staff gave him one of his first scholarship offers almost two years ago, in August 2020, and second-year coach Josh Heupel's staff reaffirmed Calhoun's previous offer from the Vols on May 13.

Calhoun said Tennessee offensive line coach Glen Elarbee is among the members of the Vols' staff who have been in contact with him.

"Coach is trying to get me down there to just see the facility and the campus," Calhoun said. "I've just heard a lot about (Tennessee). Some of my friends have told me about them."

He's coming off a visit to Florida on Saturday. In addition to his planned trip to Tennessee this weekend, he said he's scheduled to travel to Alabama the weekend of June 18.

At least a handful of major programs are staying in frequent contact with Calhoun.

"I would say Georgia, 'Bama, Florida, Texas, Oklahoma are kind of the ones I really talk to the most," he told Alderman.

Calhoun told Alderman he's not rushing to decide on a college at this point, noting that he wants to pick a school next year before the start of his senior season.
Click to expand...
-Callahan
Likes: BigOrangeTrain, wwilso29, T Dog and 4 others

Just the casual 5 star camping with us
Likes: Orange., HeadVol77, bigl3327 and 1 other person
D

allvolrecruiting said:
Just the casual 5 star camping with us
Click to expand...
Wow, Heupel and the gang really doing some recruiting in the trenches.
Likes: T Dog, Orange., HeadVol77 and 2 others

If the cards fall where they’re projected Tennessee could have a star studded OL in the future
Likes: hooter vol, BullsGap, HeadVol77 and 1 other person
C 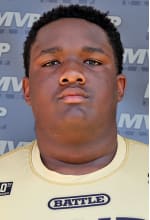 
The 2024 five-star offensive lineman still seems in the early stages of his recruitment and getting to know programs so a visit to Tennessee this past weekend was another important step as he figures out favorites. What stood out most to the Roswell (Ga.) Centennial standout was the coaching staff in Knoxville and that’s going to be an important factor as Calhoun figures out favorites which currently consists of the Vols, Georgia, Alabama, Florida, Texas, Oklahoma, Ohio State, “and more.”
Likes: Orange., T Dog, stewart6600 and 5 others

Is Tennessee recruiting massive 6-6 350 pound OT Daniel Calhoun out of Centennial High School in Roswell,Georgia? It would be awesome to have a guy that huge playing OT for Tennessee.

Jeff Clark said:
Is Tennessee recruiting massive 6-6 350 pound OT Daniel Calhoun out of Centennial High School in Roswell,Georgia? It would be awesome to have a guy that huge playing OT for Tennessee.

Some really good 2024s coming in this weekend are led by Jarvis Boatwright, Eddrick Houston, Kamarion Franklin and Daniel Calhoun.

Calhoun is a load who can play nearly everywhere on the offensive line and is right up there with Kam Pringle in 2024.
Click to expand...
-VQ
Likes: Smokey19rt, 5FingerVolPunch, Montrell Hardy and 12 others

Jonathan Echols recruiting him
Click to expand...
Can do nothing but help
Likes: Scvol7906, cherokeeeVOL and volz2wallz

We need to get this guy and BOOM.
Likes: Smokey19rt

No step on snek

Calhoun's BBQ NIL needs to be set up. Kid would be a lock😂
Likes: T Dog, 5FingerVolPunch, Smokey19rt and 6 others
New posts
You must log in or register to reply here.
<< Tennessee Vols Recruiting Forum
Share: Facebook Twitter Email Link