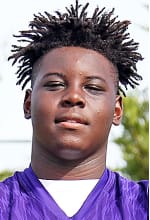 SCUTTLE: Tennessee is trying to get into the mix with 5-star offensive tackle Amarius Mims, a mammoth junior at 6-8, 315 pounds. The Bleckley County (Ga.) has been frequent visitor on UGA’s campus the last two years, building a strong relationship with Sam Pittman. But now that Pittman is at Arkansas, Mims has reset his recruitment a bit, taking a longer look at Alabama, Auburn and LSU.

The Vols hope to join that top group this spring but they don’t have a ton of time. Mims, who already has two official visits scheduled in April for LSU and Oklahoma, spoke highly of Vols OL coach Will Friend, but never visited Tennessee. No trip is currently planned, either.

“I talk to (Coach Friend) a lot on Twitter, mainly,” Mims said.

We caught up with Mims down at the Future 50 event in late December. UGA still considered the front-runner, but Pittman going to Arkansas has slowed Mims' recruitment a bit. Vols taking a swing today.
Click to expand...
- Simonton
Likes: VOLSONLY, SweetAsSodaPop, Scvol7906 and 6 others

Would love to have Mims blocking for Bailey.
Likes: VOLSONLY

Vol Main said:
Would love to have Mim's blocking for Bailey.
Click to expand...
How big is she?
V

volfaninpa said:
I'll ask.
Click to expand...
Wouldn't get my expectations up for a good.reply from those guys. 😎
Likes: volfaninpa

Class of 2021 five-star offensive tackle
Amarius Mims spent Monday in Knoxville getting his first look at the Vols. “I like how the coaches are very real,” Mims said. “Just how they talk to you. They are very real. They tell you how it is. They tell you the 100% truth. Stuff like we don’t guarantee anyone will start, but with hard work you will play. “It’s not a big sales pitch which is important to me. I don’t want someone telling me something then you get there and it’s the opposite. Trust is an important thing with me.”

“Coach Friend is a great offensive line coach. He knows what he’s doing,” Mims said as the two watched tape together. For Mims, finding a school will center around a couple of things things. “Who is the best at what I am going to major in and where can I play early,” Mims offered. “It’s real important that they have played young guys since they have been here.”

Another important factor is the fact that the Vols have showed improvement under Jeremy Pruitt’s watch. “It’s real important. Coach told me that before he came it was a mess. They have turned it around and started winning games.”

“I was reluctant to make the move. I was used to playing defense then coach told me I was built like an offensive tackle so I tried it out,” Mims explained. “I was really surprised at how easy the position came to me. My quickness and ability to run is a big help.”
“I feel like I’m capable of playing early,” Mims said. “As an offensive tackle I have been kind of good with it. I feel like with another year at it I feel like I can be pretty good. I can bend and move.”

With Mims being a star attraction at Bleckley County, plenty of college coaches will be by the next two weeks and this spring seeking his signature next December. Mims hopes to have his recruitment over well before the early signing day.

“I plan to take all my officials first before I make my decision,” Mims offered. “I will probably take them in the summer. I would like to have a decision before my senior year if I can come to it.”
Click to expand...
- VQ
Likes: Remy, AlcoVOLic, Yazzy and 5 others
V

Dawg for sure .
Likes: Chattdawg

Maybe pruitt has something up his sleeve on this one.. 😂 seems like uga to me though

FairburnVol said:
Maybe pruitt has something up his sleeve on this one.. 😂 seems like uga to me though
Click to expand...
Probably narrowing his list down to a top 21.
Likes: Coach_Z, FairburnVol, tn4elvis and 1 other person
V