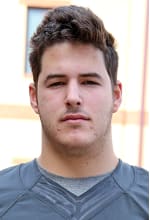 Ranking will go up, other offers are coming.
Likes: Ron Swanson, drvenner, BigOrangeGoose and 2 others

Hopefully we slow play a lot of those kids offered lately.

Hopefully we slow play a lot of those kids offered lately.

Real slow.
Click to expand...
Will end up a 4 star, would be good pickup for anyone...
Likes: TrippieRedd, Ron Swanson, drvenner and 7 others

“I was talking to Coach Elarbee when he was at UCF, and he was the one that offered me there, so that staff liked me previously,” said Mains, who’s ranked the No. 644 overall prospect and No. 62 offensive tackle in the 2022 class, according to the industry-generated 247Sports Composite.

“I have been talking to him for a few days — probably about the past week — and then they came out with the offer.”

Tennessee is just the latest of his 15 offers, but the 6-foot-6, 270-pound Mains said the Vols already are one of the top teams he’s considering. He said that’s partly because he has been to Tennessee’s campus, and he liked what he saw while he was there.

“I have (been to Tennessee) once, because my sister is actually a freshman at Auburn. And when she was looking at colleges, we went up to Knoxville once. It was very nice. I really liked it.

“I didn’t get to (see everything). I know my sister did, and she told me a lot about it. It was really interesting. I kind of got to just walk around, because my sister went with my mom and did that. And then my dad and I kind of walked around the campus a little bit, and then mostly around the football facilities.”

He said he’s high on Tennessee “mainly” because of what he saw “when I was up there,” along with the chance to play in the SEC.
Click to expand...
-Callahan
Likes: sneakergawd, SPEDVoL14, BigOrangeGoose and 12 others

Can we get this Mains. What I'm sayin.
Likes: drvenner and MiramarVol

T Dog said:
Can we get this Mains. What I'm sayin.
Click to expand...
Mains, I hope so!
Likes: T Dog

secking said:
Will end up a 4 star, would be good pickup for anyone...
Click to expand...
Whatever...

Vols in a good spot here.
Likes: FïreBall, PA Vol, MarcoVol and 2 others

It's a cardigan, but thanks for noticing.

Spoke to his HS head coach recently but didn't realize we were recruiting any of his players or I would've asked about him. Missed my chance at some "insider info".

utvols83 said:
Spoke to his HS head coach recently but didn't realize we were recruiting any of his players or I would've asked about him. Missed my chance at some "insider info".
Click to expand...
Aww mains!
Likes: Maxwell865, VOLSONLY, SugarCC and 1 other person