DL Tyree Weathersby – Tennessee
Tyree Weathersby is a big-framed, athletic presence along the defensive line. The 6-foot-4, 250-pounder possesses plus length with 34-inch arms. We see Weathersby put his physical traits to use on Friday nights at Douglasville (Ga.) New Manchester, where he’s active both as a pass rusher and run defender. The Tennessee commit is a fluid, twitchy mover and shows strong play speed, particularly in pursuit. He’s a bit undeveloped technically, but Weathersby’s athleticism and physical profile – along with the flashes on Friday nights – point to a high ceiling.
Click to expand...
-Charles Power, On3
2023 prospects on the cusp of adding a 4th star
Likes: HeadVol77, allvolrecruiting, T Dog and 23 others
S

RockyTop411 said:
-Charles Power, On3
2023 prospects on the cusp of adding a 4th star
Click to expand...
I don't know... it is almost as if UT's staff has an eye for finding talented guys...
Likes: HeadVol77, GregAmsler, T Dog and 18 others

Midair fumble recovery & return for TD from a scrimmage earlier this month:

UTBuff37 said:
He is a beast!
Click to expand...
If he stays healthy and is willing to learn from Coach G he will have a really good 4 years here and will have a chance to play at next level. That's the kind of Athletic gift he has for a young Man his size. In CHRIST Alone
Likes: HeadVol77, T Dog and InVOLuntary
W

sjt18 said:
I don't know... it is almost as if UT's staff has an eye for finding talented guys...
Click to expand...
Garner knows what SEC/NFL DLs look like. Not all of his recruits pan out because no one can predict if the player has the desire to put in the necessary work, if the player will be distracted by all that college offers and lose sight of improving as a football player, if the player will increase athleticism in college or has tapped out in high school, if he'll grow, etc., but Garner knows what the building blocks for the ones that do make it look like and he gets more than his fair share of those guys. Who knows what the future holds for Weathersby, but Garner wanting him and accepting his commitment early in the recruiting calendar was more than enough for me that this kid had a chance to be a player. Let's hope he's a stud in Knoxville.
Likes: walkenvol and sjt18

One player Tennessee is happy to have in the mix is Tyree Weathersby. Weathersby is up to 260 pounds and plans to come to a game this fall, but not sure when. He says he and Nico talk and loves how Tennessee continues to talk to him - almost like he never committed. That makes him feel wanted and he likes that. In two quarters last week, he had seven tackles, three TFLs and a forced fumble.
Click to expand...
-VQ
Likes: HeadVol77, CedarHillVol, BullsGap and 33 others

"I know recruiting is a business and stuff, but honestly, nothing has changed,” Weathersby told Volquest. “It’s going the same way as before I committed. We talk every week, every other day, every day - whatever. I talk to coach [Josh] Heupel and the position coaches. It’s going pretty much the same way as it did before. It’s been great. I really feel like they want me, and I want to go there. I feel like they want me to come in, work and play. So, it’s been going really great with them. We have a good relationship.”

During the time, the 2023 commit has begun building relationships with his fellow Volunteer class members. “I talk to them – we all have a groupchat. We are cool with each other, and it’s been an amazing experience,” the defender said. “I’m close with Caleb Herring. He’s really friendly. I’m getting close with some of the Georgia boys too. It’s really good talking to all of those guys like Jalen Smith and Ethan Davis.”

...“As a team, we are pretty good against the run and I feel like that’s a strength of mine,” the 2023 prospect said. “If the quarterback tries to roll out, he won’t be able to escape as long as my linebacker takes the right angle. Overall, I’m good at outside contain and chasing plays down. I think I need to work more on pass-rush because I’m not often in position to get that type of work in a 4. I’m trying to go up in rankings, too.”' The Peach State native has tacked on 10 pounds since his commitment announcement to Tennessee and will continue trying to put on good weight over the fall months. He’ll also be used in a variety of roles within the defense, taking advantage of his quickness and athletic ability.
VolQuest - Tyree Weathersby focused on improvement before Volunteer journey begins
Likes: TennacJed, 5FingerVolPunch, Glitch and 12 others

LittleVol said:
@allvolrecruiting
This recruit right here is a perfect example of what I've mentioned a few times.
There's just MORE good football players out there.
Truthfully, I don't grasp the scope of how much things have changed myself.
I've not been a scout for 8 years now.

This dude in 2007 would have been an obvious 4 star. Maybe he still becomes that,..
However to the point above - all recruiting services still have the same format of handing out so many spots for star rankings. What if there's only 3 true 5 stars this year? It doesn't matter, they're still going to award 30 kids the ranking of 5 star.

Now go to the opposite end of the question. How many 4 stars are there really? Maybe in 2007 there was truly just 250 kids worth a 4 star ranking. NOW...I wouldn't be surprised if it was closer to 1,000 kids nationwide that could be a 4 star. You have all these Academys now loading up on star players around the country, and the yet the old state powers from the 1980's - present are STILL strong and talented. In every state.

There is so much football talent now, because more schools have been built. There are 100 million more people in the United States than 25 years ago. Hell, that's when Peyton was playing at UT.
I'm critical of the recruiting services, but I'm also very sympathetic for you guys. You all just simply can't cover them all haha. You just can't properly evaluate enough of them. So you get a kid like Tyree Weathersby, a zero star ranking with SEC offers haha.
Click to expand...
A 4 star on On3?
Nobody saw that coming...🙄.

“He’s very disruptive making a ton of plays behind the line of scrimmage. The athleticism and ability to disrupt and make a ton of plays really jumped out to us. He had that look of someone who was ascending going into his senior year and he has made considerable strides as a player.”

-On3 Director of Scouting and Rankings, Charles Power, on bumping Weathersby from outside the top 300 to #157.
Likes: HeadVol77, Smokey19rt, WilliamDuVOL and 11 others
R

No doubt when you watch Tape. If He stays Healthy lights out in the SEC. In CHRIST Alone
Likes: TennacJed, Smokey19rt, SweetasSoda and 2 others 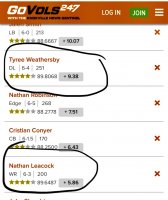 Both weathersby and Leacock are composite 4*’s on 247 now…it’s not on their profile yet but it will be shortly when the update goes through…I’m willing to bet both end up as mid level (.93-.96) 4*’s when it’s all said and done
Likes: Orange., InVOLuntary, T Dog and 25 others

7 tackles, 1 TFL and a forced fumble last Friday. Weathersby's team is still winless but he is a force.

Garner will be in the Atlanta area to see Tyree Weathersby and others on Friday before going to Kansas to see some JUCOs on Saturday.
Click to expand...
-VQ
Likes: allvolrecruiting, volthruitall, wwilso29 and 15 others
D

DaddyChad said:
Some are losing their minds over the star rating. Fact is that star rating was just thrown on the kid, not many services have even evaluated him. He hasn’t had the exposure some have and he’s just now starting to get noticed. Garner is one of if not the best Dline coach in the country and offered the kid after seeing him. He’s big, and explosive already.
Click to expand...
Bump.

This is why these early ratings mean nothing. Stars matter in the end but the recruiting services are behind a lot and as more kids play it’s harder to get everyone evaluated.

This guys a monster.
Likes: Bassmaster_Vol and Pacer92
R

KPT_VFL said:
This guys a monster.
Click to expand...
Yes he will if he stays healthy have a really good career. To truly challenge in the future for 12 team playoff its starts with a deep DL that puts tremendous pressure on offense. In CHRIST Alone
Likes: allvolrecruiting and KPT_VFL
New posts
You must log in or register to reply here.
<< Tennessee Vols Recruiting Forum
Share: Facebook Twitter Email Link