Plays at Hardaway in Columbus, supposedly has verbally committed to TN per someone who is fairly close to the program (at Hardaway). All I could find is a 247 profile that shows he has an offer from the good guys. Anyone have any intel on this kid?

No mention of a commitment on his Twitter feed but we offered him this summer: 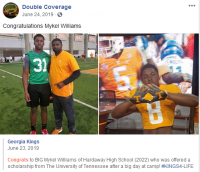 Williams is the only sophomore on the AJC's 4A all-state team.

BigorangeBoy said:
Plays at Hardaway in Columbus, supposedly has verbally committed to TN per someone who is fairly close to the program (at Hardaway). All I could find is a 247 profile that shows he has an offer from the good guys. Anyone have any intel on this kid?


Mykel Williams on Hudl
Click to expand...
Huge if true. Although it's a long way from signing day of the '22 class.

I live in Columbus and go to Columbus high, Hardaway is our biggest rival and he’s a beast.
Likes: engineerVOL, BucksnortVol, SweetasSoda and 6 others

His teammate JQ Hardaway also got offered by Tennessee and is also a beast
Likes: engineerVOL, SweetasSoda, FïreBall and 2 others

UTVols18 said:
I live in Columbus and go to Columbus high, Hardaway is our biggest rival and he’s a beast.
Click to expand...
My great nephew goes to your school, you may know him. Junior, soccer player, excellent hair - initials are AD. Loves UT
Likes: ShreveportVol and OrangeShade

BigorangeBoy said:
My great nephew goes to your school, you may know him. Junior, soccer player, excellent hair - initials are AD. Loves UT
Click to expand...
Yep, we talk about Tennessee everyday he’s in my PE class
Likes: SweetasSoda, ShreveportVol, OrangeShade and 1 other person
F

UTVols18 said:
I live in Columbus and go to Columbus high, Hardaway is our biggest rival and he’s a beast.
Click to expand...
Class of 2000. Go Blue Devils
Likes: UTVols18

Mykel Williams is name you want to know. Many college coaches are starting to learn it, and he is rapidly approaching double-digit offers. Tennessee jumped on Williams first. The Vols offered June 22 at camp and it was "exhilarating" to get that news a month after his sophomore year.

Since that first offer, the 6-foot-5, 258 pound defensive end out of Columbus (Ga.) Hardaway has added offers from Auburn, Georgia, Kentucky, South Carolina and Troy. All those came after the 2019 season.

Williams is only a sophomore, but he is already getting out, visiting schools, and out of the schools that have offered, he has tripped to Auburn, Athens, Columbia and Knoxville. He shares his thoughts on each of those programs.

Auburn: "I was at Auburn right before the dead period and I have been to a game, so I know some things about them. I really like coach G (Rodney Garner). He knows how to coach, he has put a lot of guys in the NFL and that really stands out. I think he has put 44 guys into the NFL, so how could you not like coach G if you are a defensive lineman?"

Georgia: "I really like coach Tray Scott a lot at Georgia. He is a cool guy, he has a cool personality and we have been talking a lot. I have visited Georgia a couple of times too, and I like it up there. It is a cool place."

Tennessee: "I have been there for a camp, then for a game, and I like the coaches and the fans At the game, the fans were crazy and I really liked that. They have a lot of passion. The coaches have stayed in communication, so that has been good too. Tennessee being first to offer means something too. They got it started and I really appreciate that."

He is looking to visit Kentucky for the first time in March, then get back to Georgia and Tennessee in the spring. It is still early, so he is in no rush to get through the recruiting process.

"It is crazy with the offers coming in, but I am just staying humble," said Williams. "I am always focused on my schoolwork, taking care of my grades and letting everything just happen. "I am not ready to name a leader or anything like that. It is just too soon for that."

Williams had 58 tackles, 24 quarterback hurries, 18 tackles for loss and 11 sacks in 2019
Click to expand...
- Chad Simmons, Rivals
Likes: allvolrecruiting, Yazzy, SweetasSoda and 5 others

Insane talent evaluation for Pruitt and co, being half a year ahead of everyone on this offer. Off the tops of yall's heads, who are some other elite prospects that we offered first? I feel like I've seen it so many times.
Likes: TennacJed and T Dog

ShreveportVol said:
Insane talent evaluation for Pruitt and co, being half a year ahead of everyone on this offer. Off the tops of yall's heads, who are some other elite prospects that we offered first? I feel like I've seen it so many times.
Click to expand...
I feel like this is due to Pruitt's high school pedigree. Him having coached those years at Hoover...He knows a high school talent when he sees one, because he coached them at a powerhouse. Some of these coaches start as G.A.'s and then just move on to on field college coaches to some degree and don't really know what to look for in a high school talent because all they see is college. At least not to the degree that CJP can.
Likes: FïreBall, VOLSONLY and ShreveportVol

Going to go ahead and predict the 22 class will be a better DL haul than in 15.
Likes: FïreBall

FOUR-STAR DL MYKEL WILLIAMS
Williams, a top-50 prospect nationally from Hardaway High School in Columbus, Ga., said Tennessee defensive coordinator Derrick Ansley was the "first one to contact me" among the college coaches that reached out to him early Tuesday morning.

The 6-foot-5, 255-pound Williams said Ansley sent him a message at 12:01 a.m., and he later heard from Vols head coach Jeremy Pruitt, too. "(Ansley) wanted me to commit," Williams said, recalling the first message he received.

Williams said Georgia contacted him not long after Tennessee. The Vols and Bulldogs were the first teams that came to mind for Williams last month when 247Sports' Rusty Mansell asked him which team was recruiting him hardest. “I’d say Georgia or Tennessee,” Williams said at the time.

He picked up an early offer from Tennessee in June 2019 during a visit for one of the Vols’ camps. Tennessee hosted him again in October for its home game against Mississippi State, and he most recently visited the Vols in early March, just a few days before the NCAA shut down all recruiting visits.

Williams is ranked by 247Sports as the No. 44 overall prospect and No. 5 defensive tackle in the 2022 class.
Click to expand...
- Callahan
Likes: allvolrecruiting, FïreBall, T Dog and 3 others

Mykel Williams is the No. 51 overall prospect in the country, and after seeing him live again recently, that is too low. The 6-foot-5, 258 pound junior at Hardaway High is an athletic defensive end with size, feet, flexibility, strength, speed and upside.
Click to expand...
"It is exciting to see who all is hitting me up," said Williams. "Leading up to September 1, the schools that have been on me hard are LSU, Georgia, Ohio State, Penn State, Clemson, Tennessee, Notre Dame, USC, Arizona State and a few others.
Click to expand...
"I have really clicked with a lot of the coaches. Some of the head coaches are coach Smart at Georgia, coach Orgeron at LSU and coach Pruitt at Tennessee.
Click to expand...
c.simmons
Likes: T Dog, VOLSONLY, JustSomeVolFan and 7 others

Fingers said:
c.simmons
Click to expand...
Arizona State looking around at the other suitors:

SEC bound in some capacity, imo.

His team played my team tonight... pretty physical but only dominated because of his size and athleticism

UTVols18 said:
His team played my team tonight... pretty physical but only dominated because of his size and athleticism
Click to expand...
He was only a better basketball player because he was tall, fast, jump higher than everyone else and could knock down a jump shot from anywhere. Other than that he was average.
Likes: NYCVolunteer, PA Vol, VOLSONLY and 4 others

MiramarVol said:
Well, that's usually enough to dominate don't you think?
Click to expand...
My team has like the worst o-line ever it’s hard to tell how good he is because everyone dominates against us
New posts
You must log in or register to reply here.
<< Tennessee Vols Recruiting Forum
Share: Facebook Twitter Email Link