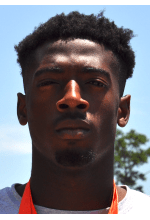 Film looks good. What kind of competition does he play against at Palmetto?

VOLUNTEERSZN said:
In his top 6. He’s got a solid list for a 3⭐️
Click to expand...
Agreed. Didn't look at his visits... Did he camp a lot this summer?

jakez4ut said:
Agreed. Didn't look at his visits... Did he camp a lot this summer?
Click to expand...
I don’t think so. Pretty sure he was injured most of his junior year
Likes: SweetasSoda and jakez4ut

After visiting Tennessee more than two months ago, one of the Vols' wide-receiver targets is planning to make another trip to Knoxville this fall. Three-star Class of 2020 wide receiver Kentron Poitier of Miami Palmetto High School in Pinecrest, Fla., told 247Sports' Luke Stampini that Tennessee is one of three schools that are in line to host him on official visits. The 6-foot-2, 200-pound Poitier said he plans to take official visits to Florida State, Florida and Tennessee. He has yet to set dates for any of the possible trips.

Less than a month ago, he named a top six of Florida, Florida State, Tennessee, South Carolina, Syracuse and Louisville. Poitier visited Tennessee in June to attend one of its camps, and he said he wants to make the trip to Knoxville again "to see how it is around the school and how the school is. I’ve been there for a camp in the summer. That’s it," he told Stampini. "They really like me up there. They would like to have me out there."

He told GoVols247 last month that Tennessee is in the running for him because of "their coaching staff — their backgrounds and the relationship they have with my coach" — and he has enjoyed getting to know Vols tight ends coach Brian Niedermeyer, who talks with him "about every day. I just like Coach Niedermeyer," Poitier said at the time. Poitier said he's also intrigued by his possible opportunity to compete for early playing time at Tennessee.

"They said they have four receivers that are going to graduate this year," said Poitier, who's ranked the No. 560 overall prospect and No. 99 wide receiver in the industry-generated 247Sports Composite for the 2020 class. Poitier said last month that he planned to visit Tennessee again, "probably during the season."

He said at the time that he was interested in the Vols even before he traveled to Knoxville on June 8 for one of their camps. But he liked what he saw while he was there, and he said Tennessee's coaches were impressed by his performance during the camp. "They said they really liked me," Poitier said last month. "They like how I catch, how I run routes."

Poitier told Stampini that he's not rushing to decide on a college. "I’ll commit maybe in the middle of the season," he said, "or after the season during the early signing (period) in December."
Click to expand...
-247
Likes: F0Rt_V0L, JustSomeVolFan, FïreBall and 3 others
New posts
You must log in or register to reply here.
<< Tennessee Vols Recruiting Forum
Share: Facebook Twitter Email Link