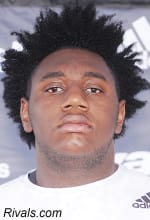 To be updated with noteworthy Vols notes during his recruitment
Click to expand...
Don’t know if noteworthy but he is BIG on Kensucky. Dude is a road grader though.

Going to Kentucky Friday then us Saturday. Were invited to go along with family but
just can’t make it. Hope someone gets in his ear but he really likes UK.

He also re-tweeted Pruitts 20 to the Top tweet from earlier today.

Think he wants in. Or might be in, quietly.
Likes: T Dog and SweetasSoda

Big Gucci Sosa said:
Click to expand...
Kentucky stole our checker boards, have they moved on to our phrases, too?

“It really exceeded my expectations,” said Leonard. “A lot of people had told me about Tennessee and what was up here, but I don’t think anybody could have prepared me for this. “Just the facilities, the campus — stuff like that — it’s the nicest I’ve seen. I’ll definitely, most likely come back for an official sometime soon,” he said. “Tennessee is definitely pretty high after the visit. But I’m still committed to Kentucky.”

After arriving at Tennessee late Saturday morning, Leonard said he and his family spent nearly all day on campus leading up to the Vols’ spring game Saturday night and spent most of Sunday there, too. He said he “got to hang out with the coaches and the players a lot,” including second-year Tennessee coach Jeremy Pruitt, first-year offensive coordinator Jim Chaney, offensive line coach Will Friend, defensive line coach Tracy Rocker — Leonard’s area recruiter for the Vols — and graduate assistant Nick Sewak.

They all made it clear to Leonard that Tennessee could use his help on the offensive line. “They love the way I play the game,” he said. “They love my physicality. They like how I finish people on film, and they’d love to have me. They say they need guys like me in the trenches, with that mentality and that physicality, to come up to Knoxville.” The Vols’ spring game allowed Leonard to see their offense in action, and he said he believes he could be a good fit for their system. “They run the ball a lot, which is a plus for me,” he said. "I like to run-block.”

“It’s been awhile since I’ve been up there,” he said. “I’ve taken some visits. A lot of the fans and stuff thought I’d completely forgotten about Kentucky, but that’s not the case. I’m still committed. I’m still solid. “(Kentucky’s coaches) say it’s important to take other visits, to reaffirm and to shore myself up. They’re not worried about that. They say they have enough good things at Kentucky to talk about to say anything about anybody else.” But Leonard isn't ready to close the door on the other schools pursuing him. He said he plans to use most, if not all, of his official visits in the coming months, starting with “most likely two to three this summer.”

“I mean, I’ll probably have my decision made, definitely before my senior season starts,” Leonard said. "But the announcement of that (is) to be determined. I’m not sure yet.” Leonard, who said he “absolutely” plans to graduate in December and enroll in January at the school of his choice, added that he doesn’t have any additional visits planned at this point because he’s “getting ready to start spring football.”
Click to expand...
-247
Likes: sneakergawd

Sounds like if we push, he’s ours
Likes: ChismsHeadband and Vols4us
I

I went to grad school at UK; for the life of me I don’t know why a kid would want to play football at a basketball school.
Likes: ChismsHeadband

Ron Swanson said:
-247
Click to expand...
So he's definitely committed and probably/definitely going to have his decision made before his senior season.
Likes: LouderVol, Easttnken, volsagain and 2 others

Ron Swanson said:
-247
Click to expand...
If I read the last two paragraphs right, he is still committed to Ky but will make an announcement before the start of his Sr year.

He's making sure he has a guaranteed spot to land by staying committed to UK, but definitely wants to upgrade.
Likes: Paper_Towel, UpstateVol613, jdhallvols and 2 others

illinoisvolfan1 said:
I went to grad school at UK; for the life of me I don’t know why a kid would want to play football at a basketball school.
Click to expand...
That's what he'd be doing at UT, though. We're a basketball school now.

(Kidding, before anyone actually takes this seriously)
Likes: illinoisvolfan1

i think they need to stay in on this kid. no telling what Ratledge does.
Likes: bignewt

SweetasSoda said:
So he's definitely committed and probably/definitely going to have his decision made before his senior season.
Click to expand...
And definitely, most likely will take an OV.... Somewhere....
F