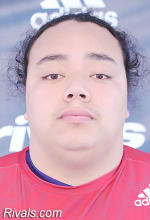 The quest for finding defensive tackles on the recruiting trail never stops. Monday, the latest nose tackle to get an offer from the Vols is Agelu Nunu. Nunu is a 6 foot 281 pound prospect from Union County High School in Lake Butler, Fla. Tennessee’s offer is Nunu’s first from a power five school but he wasn’t surprised when he learned of the offer on Monday.

“I went up for a visit last May and talked to coach Pruitt. He said he was going to send someone by to see me this spring and they did,” Nunu said. “Coach Rocker came by to see me and coach Pruitt gave me the offer.” After getting the Tennessee offer on Monday, Nunu quickly heard from Texas A&M and North Carolina. “I guess everyone was waiting on me to get an SEC offer,” Nunu said. “I appreciate every offer I get, but a power 5 offer is different and is a blessing.”

Since visiting the Vols last spring, Nunu has kept tabs on Tennessee and he likes what he has seen. “I see they are building their program back up,” Nunu said. “They have a lot of freshman coming in to help them and are rebuilding things. So there would be an opportunity to play early there.” Nunu plans to see the Vols again soon depending on when the Vol staff wants him to visit. Nunu also has an idea of what he’s looking for in a school.

“I want to stay on the east coast God willing. I’m looking for a family atmosphere. Early playing time is important to me and if my family and I are comfortable there. If my parents like it then I’m going to like it.” As for what the Vols like in Nunu, it’s his strength as a nose tackle. Nunu Twitter page is eye catching with his 44 reps at 225 pounds. “Power and my strength is what they like. I like taking on a triple team, pushing in the backfield and forcing a play one way,” said Nunu who has been lifting weights since the 5th grade. “As for forty-four reps of 225. I was surprised, I was able to do it. When I got to 30, I was like let’s go for 40 then I was like lets go to 50. I was disappointed in myself that I could get six more and get to fifty.”

Nunu, who was at Troy last weekend, has grown up in a military family living in Texas, Hawaii, California, New York and now Florida for the last six years. Nunu said Florida has made him a better player and that moving around will help him transition to whatever school he attends. “I feel like it will help me,” Nunu said. “I have lived in a lot of different environments. I think it’s a blessing that I ended up in Florida. The ball is different down here. The athletes here are amazing.”
Click to expand...
-VQ
Likes: Remy, Orange Studs, T Dog and 5 others

What’s up with the 40 pound weight discrepancy?

As soon as he gets a Tennessee offer two others offer. I am seeing a trend here.
Likes: nesbuddha66, Remy, WestTnVFL971 and 8 others

Ron Swanson said:
And I'm not sure what his correct weight is, his profiles, hudl, articles, etc range from 280-344lbs.
Click to expand...
Looks closer to the 344 tbh. That's fine because he could easily get down to ~300-310 without losing that strength

Would be a NT if I had to guess.

Dude is a wtecking ball... Pretty quick off the ball too..
Likes: jdhallvols and Pacer92

Hope we land this guy. Can't teach that strength.

Jessie Mahelona shaped fellow. 44 reps of 225 is pretty strong even by NFL standards. In high school it's damn impressive.
Likes: Remy, jwilliams, GoVolsDR and 6 others

SweetasSoda said:
As soon as he gets a Tennessee offer two others offer. I am seeing a trend here.
Click to expand...
No composite.
247 2 star (79)
Nothing on Rivals

Also.... getting Elijah Simmons and this kid in back to back classes... good luck running inside on us in a few years.
Likes: Remy, GoVolsDR, titansvolsfaninga and 4 others

Ron Swanson said:
And I'm not sure what his correct weight is, his profiles, hudl, articles, etc range from 280-344lbs.
Click to expand...
I noticed that after I posted. The first post says 320 then the VQ quote about third post down says 281.

Rishvol said:
Looks closer to the 344 tbh. That's fine because he could easily get down to ~300-310 without losing that strength
Click to expand...
I've seen that comment about Mackenzie

Skullbone said:
Jessie Mahelona shaped fellow. 44 reps of 225 is pretty strong even by NFL standards. In high school it's damn impressive.
Click to expand...
Mahelona was big time..I belive if I remember correctly that Tennessee was the first to offer him out of junior college. It was very tragic to hear of him dying at such a young age. He was a All American up on the HILL his Junior year!
L

That is the fakest video I've seen on volnation.

This kid was reported on by Hubbs on VQ.

Been waiting on some Big Boyz for the DL.
M

Glad to hear. Lives in next town seen him at weight lifting meet strong kid very nice and respectful. Glad Tennessee is recruiting nearby my sons going into 11 grade and he’s big and a beast remember number 54 aka the pancake mayor

Skullbone said:
Jessie Mahelona shaped fellow. 44 reps of 225 is pretty strong even by NFL standards. In high school it's damn impressive.
Click to expand...
I looked it up...44 reps at 225 would be good enough for 6th all time at the NFL combine, just 7 reps short of the combine record of 51 (Justin Ernest 1999).

LoudOrange said:
That is the fakest video I've seen on volnation.
Click to expand...
huh? What is?
N

I_Bleed_Orange77 said:
huh? What is?
Click to expand...
Probably talking about the bench press video. I’ll admit it looked a bit too easy imo almost as if it was the fake weights you see these YouTube weight lifters use. If they are real then he is a strong mofo
New posts
You must log in or register to reply here.
<< Tennessee Vols Recruiting Forum
Share: Facebook Twitter Email Link