Let's just get this speed demon and swing pass all day on the edge... he gon... and breaks 2 opponents ankles per carry... new stat

jakez4ut said:
probably not, no.

and we've discussed this before, i'm hesitant to put the future on credit too. of late, there's been very few instances i'd be in favor of blue shirting....and if there's an opportunity to up grade howard's spot, i don't really doubt this staff will do it.

and i'm not saying i'm in favor of doing it with howard, just of the guys in the class right now, and my 'feeling' that howard is one they'd like to keep, he could make the most sense as a candidate for it.

but knowing the 22 class is pretty loaded, and if we do anything this season worthy of keeping and building on the momentum we've seemingly got going, then i would probably be against taking spots away from next year.....cause it would most likely mean we'd have to blue shirt next cycle to fill that class, and it may be more difficult to find candidates for that.............
Click to expand...
Credit card recruiting! Pay the bill and shred the card.
Likes: Easttnken and jakez4ut

ALStateLineVol said:
Now I feel really stupid. I was trying to make it into something it wasn't.
Click to expand...
Nah, you good, man! Just DO NOT ask what DN means, if someone tries to pull that on you.
Likes: ALStateLineVol

ALStateLineVol said:
I'm new to recruiting, so can you please tell me what "GIT shirt" is? I think blue shirt can be given to someone who has never official visited the campus.
Please correct me if I'm wrong.
Click to expand...
Blue shirt is not the correct term either. It’s called a blupeshit. Please.
Likes: Big Orange#1, franklinpence, 5FingerVolPunch and 5 others

smokeyz1 said:
Pretty sure he is still eligible w/ no "official" visit yet. UT normally saves that OV for local kids to the end just in case they need a last minute BS. Since Howard is so close to campus, it's not much difference for him to take a UOV vs OV.
Click to expand...
247 doesn't show any OVs. Not sure if they list in-homes, but none of those listed either.

And we'll definitely need a couple BSs to get over 25. Think we are still 1 behind (credit card crootin), at least. But I could see that going on indefinitely. Don't see us undersigning anytime soon. Pruitt ain't got time!
Likes: volsagain

TrippieRedd said:
Nate Evans
Jay Jones
And Elijah Howard I can see getting a git shirt

Roc Taylor I can see going elsewhere
I think Mosely goes elsewhere
I also think Darrell Jackson goes to FSU with his buddy.
Click to expand...
I can see all of this happening except Howard. He sticks. He had some SOLID RB tape last year. I wouldn’t be surprised if they keep him there. I personally like him better than Wright although I think I’m the minority.

He also has the flexibility that Pruitt covets. He could play several positions on either side of the ball but I think he winds up at RB or slot.

Howard is the best of everyone you mentioned except Taylor. They are similar levels of prospects.

Jackson and Mosely are the next tier. And Evans and Jones have no business in our class IMO.
Likes: scvolfan7, Bassmaster_Vol and TrippieRedd

ALStateLineVol said:
Now I feel really stupid. I was trying to make it into something it wasn't.
Click to expand...
OGbabyaviVol said:
Nah, you good, man! Just DO NOT ask what DN means, if someone tries to pull that on you.
Click to expand...
Don’t listen to OG.... you definitely need to ask what DN is. It’s integral for recruiting.
Likes: T Dog, 5FingerVolPunch and OGbabyaviVol
A

cHiZzLeVOL said:
Don’t listen to OG.... you definitely need to ask what DN is. It’s integral for recruiting.
Click to expand...
I'll mostly sit back and read what everyone else has to say but I don't know what it stands for so I'll figure it out as I go along. Because of the situation the past few months, I have had more time on my hands than ever before so I thought I would join this board. I have observed/read it for many years, just never joined. It has been entertaining for sure, especially during the coaching searches. I really miss "MIT" and a few others.
Likes: Orangeredblooded, DarthVol1, Kristy* and 3 others

What if instead of his top 5 he just goes ahead and drops his commitment video to us. Boom
Likes: Big Orange#1, Palm Beach Vol, tennvols77 and 1 other person

swchandler1988 said:
What if instead of his top 5 he just goes ahead and drops his commitment video to us. Boom
Click to expand...
Would be awesome for him to do that and bring Taylor with him! Both of them together announcing we'er going to the "BIG ORANGE in TENNESSEE" One can hope ...right!

griddie said:
Really want this kid
Click to expand...
Is he underrated?

I think this guy got his FutureCast wrong.

Brashard was committed until 5/1/20. He changed his pick from Tenn to Florida on 5/2/20. Guessing he did it backwards and meant to change to Tennessee after the decommitment.

Additionally, he has only made picks for us. 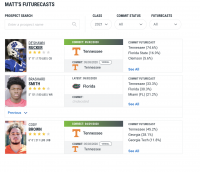 SlappyVol said:
I think this guy got his FutureCast wrong.

Brashard was committed until 5/1/20. He changed his pick from Tenn to Florida on 5/2/20. Guessing he did it backwards and meant to change to Tennessee after the decommitment.

Additionally, he has only made picks for us.

View attachment 281672 View attachment 281673
Click to expand...
Meh, just another MTSU mod. Still can't believe they have those. He and Tyler Pellom throw out FCs, but I have a hard time believing they know a ton either. I think they read VN As soon as we put the pieces together on Aaron Willis and Katron Evans leaning here, Pellom put in FCs the next day before anyone else 🤔

Announcing on NSD?! This recent surge has killed all my patience.