Certainly one of the most distinctive voices in broadcasting, Myron Cope. He described his own voice as sounding like a hurricane hitting a junk yard. And inventor of the Terrible Towel. 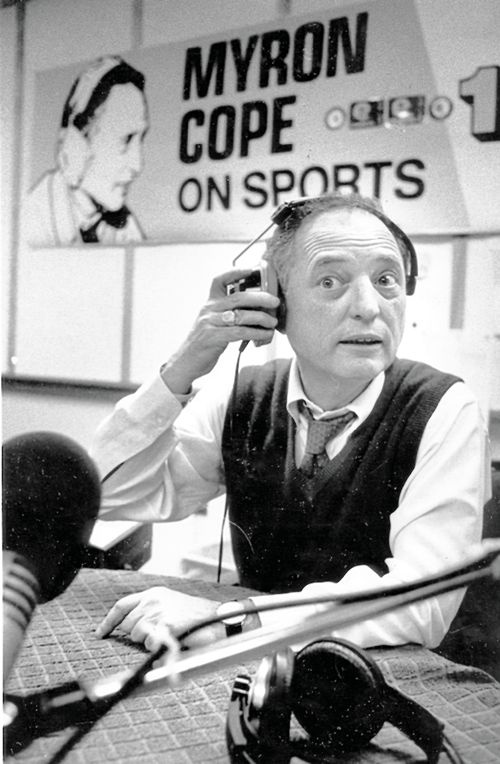 Tony Romo. And I love the Eli and Peyton show on MNF
Likes: TC 83

Doberman said:
I like all the legends…..nostalgia and all.

Same for Nessler. McDonough is solid as well. Someone mentioned Huard, who I also think is excellent.

TNHopeful505 said:
Tony Romo. And I love the Eli and Peyton show on MNF
Click to expand...
If its a game I dont care about ill watch Peyton and Eli, but imo they don't focus enough on the games. Feels like Eli and Peyton doing a podcast during a game. Glad to hear Troy and Buck on MNF tonight. Infinitely better than Booger and Witten
Likes: tbones0711

Boston Vol said:
I think that Brad Nessler and Sean McDonough are probably the two best play by play guys right now. I’ve always thought Brock Huard was an outstanding color guy. Unfortunately he’s been relegated to the B team on Fox. I’ve never had any real issue with Danielson. I’ve always said that he’s a lot like Bill Raftery. When they stick to actually analyzing the game, their terrific. It’s when they sidetracked with all their nonsense that they become a hindrance to the broadcast.
Click to expand...
Yep agree on Nessler team and Blackledge isn’t the worst.

Proud Army Wife said:
I forgot her name, but the one who announced our KY game last season. I briefly flipped to the Mizzou game the other day, heard her and changed it back lol. Her voice is super annoying.
Click to expand...
Was it the lady with the deep voice that sounds kind of mannish?
I

Nessler is my favorite
Mowens is by far the worst. Her voice is terrible and her play by play isn’t much better.
U

Bill Curry. He'd spend a whole quarter talking about a player and everyone in their family tree! 😂
Likes: Doberman and SpookyAction

supersmo18 said:
Was it the lady with the deep voice that sounds kind of mannish?
Click to expand...
Nah, this would be the Jimmy Neutron impersonator.
Likes: supersmo18

LadyVolette said:
I’m going to get booed off of here, but I don’t mind Jordan Rodgers, because he is kind of eye candy
Click to expand...
My wife always says, "He's so good looking!"
Then after he speaks, "I see why you hate him."

It is easy to hate announcers when your team is a letdown. I hated all announcers during the Pruitt years. They had so little good to say.

There are too many televised games to have enough good announcers these days.

Probably Howard Cosell……..you know, because he was a drunk and racist.

Kessling is the WORST by a country mile. Why they have kept this bumbling idiot for so long is beyond reason.
Likes: 508mikey and Proud Army Wife

Jessica Alba is my wife

“ College football, what better way to spend an autumn afternoon“.

allvols4life said:
Gary Danielson is by far the absolute worst!! I would like nothing more than to never have to listen to his incessant rambling ever again. Actually... I would like to punch him.
Click to expand...
Same for me.

JoAllan said:
Probably Howard Cosell……..you know, because he was a drunk and racist.
Click to expand...
Cosell quit calling boxing after Larry Holmes defeated Tex Cobb. Cobb always said that was his gift to boxing, then mentioned he was thinking of taking up football!
Likes: Owl-flavored, 67Vol, Raebo and 1 other person

Dave Neal deserves respect on his name. Those 11am games and his voice are gold. From jp sports back in the day to sec network now.
Likes: kcvols1, 508mikey and SpookyAction

This place is my time suck

Bigorangedan23 said:
Herbstreit never shuts up and talks about stupid stuff the whole ballgame, I turn the sound off and listen to Vol network. I miss Curt Gowdey (NFL)and Brent Musberger.
Actually ESPN and ABC is a complete train wreck when it comes to broadcasting.
Click to expand...
Hahahaha, you’re RIGHT! Herb does talk about the dumbest, random things during the broadcast. I wonder if it gets on Fowlers last nerve?
V

casual-observer said:
Maybe we should stand up a poll - might be fun to see the results.

A post from Saturday got me thinking...who are your most and least favorite announcers over the years?

Personally, I'm a fan of the Greg McElroy/Joe Tessitore combo. Joe's voice is exciting and he seems even-keeld for both teams. Greg also seems fair to both sides and treats Vol fans respectfully.

I find Chris Fowler to be in the same league as Joe Tessitore (or I guess maybe it should be said, Tessitore is in the same class as Fowler) but Herbstreit is not as unbiased as the others. He's a bit of a baby and, even though he tries not to...he's a Ohio State homer.

I miss Brent Musberger - I know a lot of people dont' like him but to me - his is a voice of college football.

Gary Danielson is my least favorite ever. Whenever TN goes up against a ranked opponent, it's never because TN is playing well - it's always because the other team is doing something wrong. He's a jerk on the air through-and-through. I always turn his voice off and listen to the radio broadcast - even if they aren't matching up.

Todd Blackledge and Brad Nessler are my top 2.

Musberger, Mowins, and Danielson are by far my bottom 3.
Likes: tbones0711 and joceppyjoe

Oh, and anyone that says "Vals".
Likes: tbh

This place is my time suck

TnVol! said:
Mowins is the worst of all. Gary Danielson is horrible, and Herbie cry baby ranks high on my low list.
Click to expand...
I was hoping someone would post the crying Herbie GIF. Classic, and pretty much sums him up,
Likes: tbh and TnVol!